It's literally snowing ash in parts of the Bay Area. 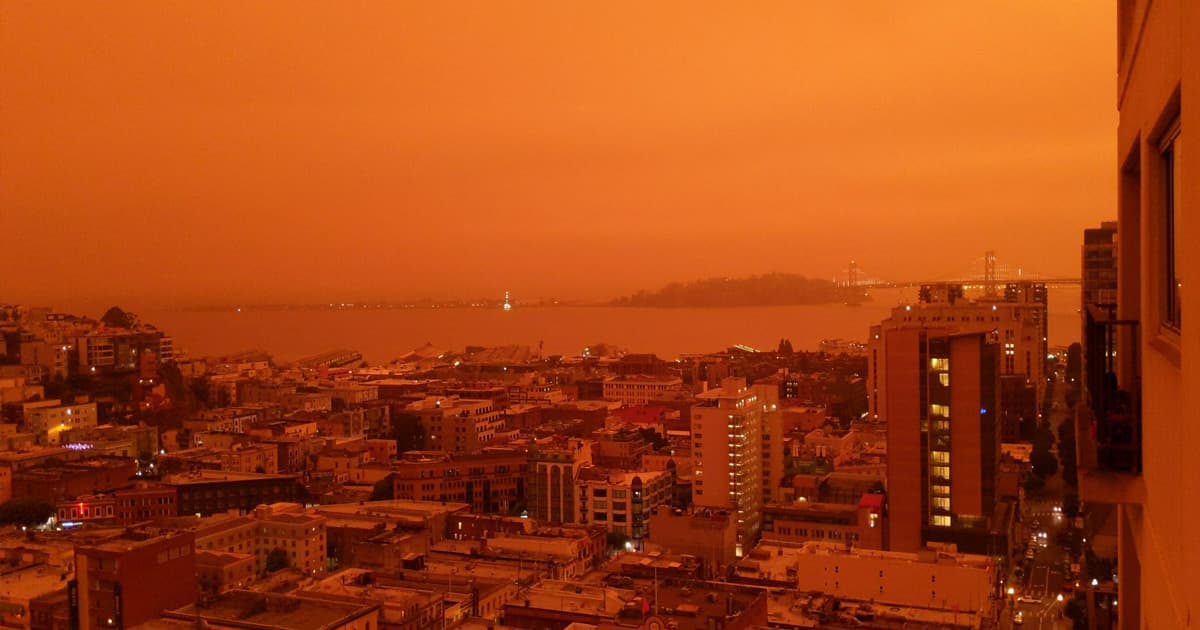 As if a pandemic of unprecedented proportions wasn't enough, major wildfires are now blanketing the West Coast — and turning the skies an apocalyptic shade of orange.

Certain parts of the Bay Area, near San Francisco, are even seeing ash snowing down from the gloomy skies.

The sun isn't expected to make an appearance for several days, according to meteorologists. Health officials are instructing residents to stay inside, and avoid outdoor activity, with air conditioners on and windows and doors closed.

Oregon governor Kate Brown declared a statewide emergency on Tuesday, with thousands of Oregonians being evacuated from their homes due to declining conditions.

"We do not have context for this amount of fire on the landscape," Doug Grafe, chief of fire protection at the Oregon Department of Forestry, told reporters on Tuesday, as quoted by Oregon Public Broadcasting.

Can’t quite capture the orange of the California sky with your smartphone camera?

That’s because our photos are all fake now — with colors selected by AI, trained on what we think is pleasing. It decides what’s “real."

In sum, it's a climate catastrophe that has come home to roost — despite decades of evidence.

"We can no longer assume that there will always be a habitable planet for us — because unless we enact major changes now, there won’t be," wrote Los Angeles local Henry Mantel in a letter to the LA Times.

Opened the door this morning in SF. Sky in California is really this orange pic.twitter.com/erJB2ENTPY

The fires are raging with such a  ferocity, in fact, that they can be easily spotted from space. A single gigantic cloud of dust recorded on September 6 even started obscuring all other scientific readings.

7:30 am in San Francisco. This is the light and the color of the sky. Honestly I am a bit panicked. I thought it's 3am. #SanFrancisco #SanFranciscoSmoke pic.twitter.com/T9sM7JINCi

Warm air from fires rising up carrying water vapor with it can create a "thunderhead cloud" — as its name suggests, an apocalyptic clash of fire and lightning, the latter of which can even end up creating new fires, according to NASA.

Read This Next
Sun Shield
Scientists Increasingly Calling to Dim the Sun
Coastal Chaos
The Doomsday Glacier Is Hanging on "By Its Fingernails," Scientists Say
Dry Dock
The Top 13 Wildest Objects That Terrible Droughts Have Revealed
Harambe 2.0
Freya the Boat-Climbing Walrus Euthanized Because of Stupid Humans
Disease Dilemma
Study: Climate Change Making More Than Half of Infectious Diseases Far Worse
More on Earth & Energy
Oversharing 101
Nov 21 on the byte
Bill Gates Reflects on Drinking Product of Fecal Sludge
Battery Powered
Nov 17 on the byte
Startup Says It's Building a Giant CO2 Battery in the United States
Monkey Business
Nov 15 on the byte
Meal Kit Giant Accused of Using Monkey Labor to Source Coconut Milk
READ MORE STORIES ABOUT / Earth & Energy
Keep up.
Subscribe to our daily newsletter to keep in touch with the subjects shaping our future.
+Social+Newsletter
TopicsAbout UsContact Us
Copyright ©, Camden Media Inc All Rights Reserved. See our User Agreement, Privacy Policy and Data Use Policy. The material on this site may not be reproduced, distributed, transmitted, cached or otherwise used, except with prior written permission of Futurism. Articles may contain affiliate links which enable us to share in the revenue of any purchases made.
Fonts by Typekit and Monotype.