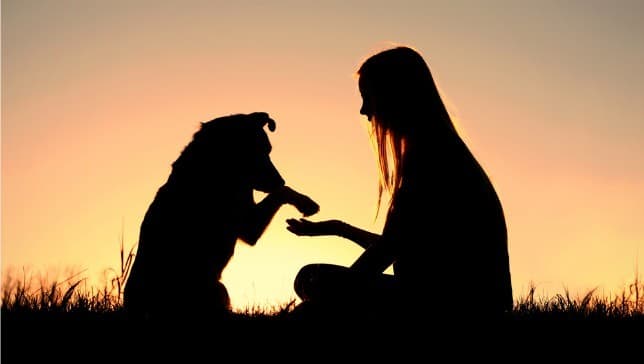 There are a number of people who have remarkable relationships with their dogs. They sleep with us, go with us on vacations and holidays, and are constant companions for decades on end. Some even stay with their owners after the owner's death. But dogs are more than constant companions; canines have saved their owners from fires, fended off would-be murders, and even detected their owner's cancer for them. They are truly astounding creatures. And new research indicates that they really are as loving and devoted as many people believe—In many cases, they really our our best friends.

Humans and dogs have lived together for an estimated 30,000 years. And they are increasingly used as companions and viewed as family members. Today, dogs find their homes in almost 50% of American households (I have two).

If someone were to ask me, I would assert that my dogs care for me as much as I do them (which is quite a lot). This belief is based on a number of things: The way that they wag their tails when I walk in the door, how they fight for attention and lap space, the way that they follow me around the house from room to room...I could go on and on.

However, this belief is largely just that—a belief. Is there any substance to my assumption? Do my dogs really love me? Is their behavior really indicative of their feelings? These are questions that many people have been asking, and now we have some answers.

And the new research says, yes. Thanks to recent developments in brain imaging technology, we're starting to get a better picture of what's going on inside the canine cranium. As a result, we're coming to a better understanding of not only how their brains work, but also how they feel about (and respond to) us.

Scientists who are studying the brains of our canine companions assert that dogs do seem to love us back, and more than that, they actually see us as their family. Indeed, it turns out that dogs rely on humans more than they do their own kind for affection, protection, and comfort.

Most of this information comes from a recent neuroimaging study about odor processing in the dog brain. Animal cognition scientists at Emory University trained dogs to lie still in an MRI machine and used fMRI (functional magnetic resonance imaging) to measure the neural responses that dogs had to the smell of people and  other dogs. In order to measure the responses and extract information from the data, the scientists used dogs and people that were both familiar and unknown to the animal in question. This method is effective because dogs navigate the world through their noses. As a result, the way that they process smell offers a lot of potential insight into social behavior.

Ultimately, scientists found that dog owners' scent activated the "reward center" of the dogs' brains, called the "caudate nucleus." In fact, as it turns out, of all the smells that dogs take in, they prioritized the smell of humans over anything or anyone else.

This adds to an increasing amount of scientific evidence about the emotional connections we have with our pets. For example, in an article published in the journal PLOS One, scientists examined what happens in the brains of women when they see their kids and their dogs (turns out, similar things).

Scientists used a functional magnetic resonance imaging (fMRI) machine, which looks at blood flow and oxygen levels in the brain, to determine what part of the brain is activated. While in the fMRI machine, they showed the women images of their child and their dog, as well as pictures of other unknown children and other dogs.

"Several previous studies have found that levels of neurohormones like oxytocin — which is involved in pair-bonding and maternal attachment — rise after interaction with pets, and new brain imaging technologies are helping us begin to understand the neurobiological basis of the relationship, which is exciting," said Lori Palley, DVM, of the Massachusetts General Hospital Center for Comparative Medicine and co-lead author of the report.

In addition to these findings, studies with other canine neuroimaging research indicate that there are some notable similarities in the way dog and human brains process emotionally laden vocal sounds. Researchers in Budapest at Eotvos Lorand University found that happy sounds light up the auditory cortex in both species. This commonality speaks to the uniquely strong communication system underlying the dog-human bond. Before this study, we had no idea what happens inside canine brains when humans make noise.

"It's very interesting to understand the tool kit that helps such successful vocal communication between two species. We didn't need neuroimaging to see that communication works [between dogs and people], but without it, we didn't understand why it works. Now we're really starting to." Attila Andics, a neuroscientist and lead author of the study.