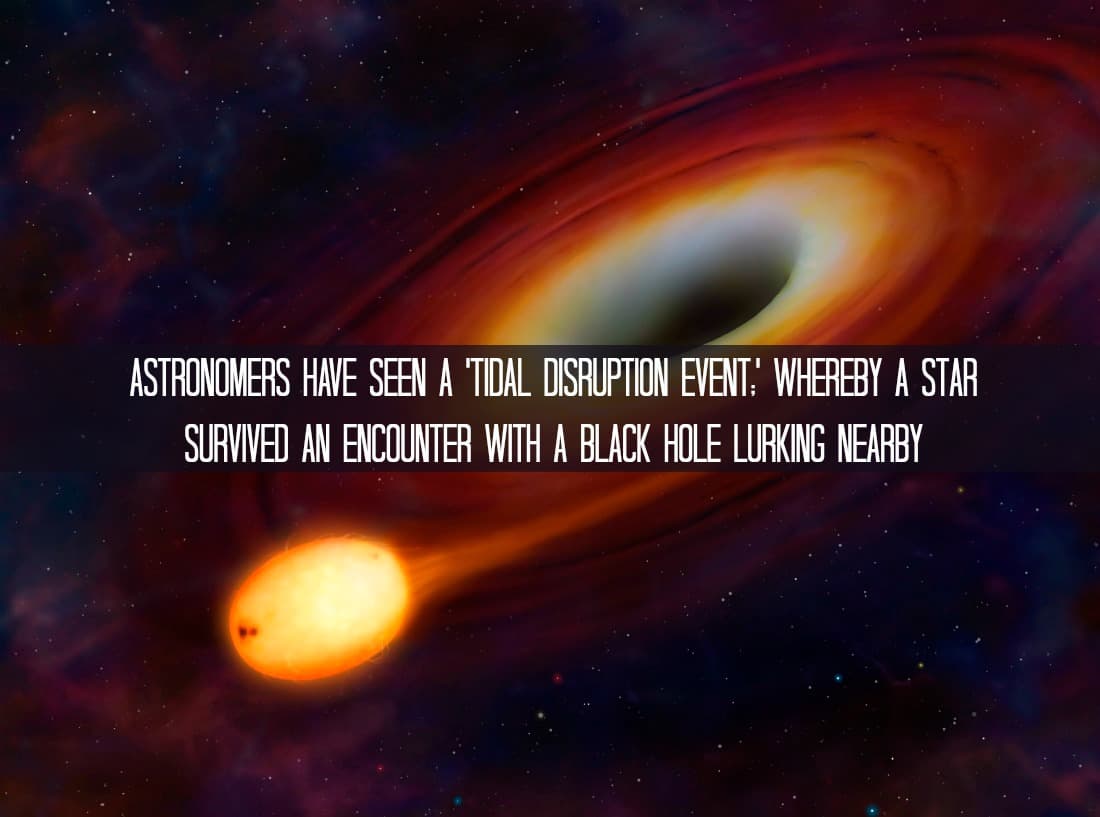 Astronomers have gotten the closest look yet at what happens when a black hole takes a bite out of a star—and the star lives to tell the tale. We may think of black holes as swallowing entire stars—or any other object that wanders too close to their immense gravity. But sometimes, a star that is almost captured by a black hole escapes with only a portion of its mass torn off. Such was the case for a star some 650 million light years away toward Ursa Major, the constellation that contains the "Big Dipper," where a supermassive black hole tore off a chunk of material from a star that got away.

Astronomers at The Ohio State University couldn't see the star itself with their All-Sky Automated Survey for Supernovae (ASAS-SN, pronounced "assassin"). But they did see the light that flared as the black hole "ate" the material that it managed to capture.

In a paper to appear in the Monthly Notices of the Royal Astronomical Society, they report that the star and the black hole are located in a galaxy outside of the newly dubbed Laniakea Supercluster, of which our home Milky Way Galaxy is a part.

If Laniakea is our galactic "city," this event—called a "tidal disruption event," or TDE— happened in our larger metropolitan area. Still, it's the closest TDE ever spotted, and it gives astronomers the best chance yet of learning more about how supermassive black holes form and grow.

ASAS-SN has so far spotted more than 60 bright and nearby supernovae; one of the program's other goals is to try to determine how often TDEs happen in the nearby universe. But study co-author Krzysztof Stanek, professor of astronomy at Ohio State, and his collaborators were surprised to find one in January 2014, just a few months after ASAS-SN's four telescopes in Hawaii began gathering data.

To Stanek, the fact that the survey made such a rare find so quickly suggests that TDEs may be more common than astronomers realized.

"We found one right out of the gate," he said. "Based on that, we are encouraged that the rate may be higher than one TDE every year or two. "You could say we just got lucky, but when you get lucky time after time, you're doing something right," he continued. "Maybe the rate truly is higher than people expected, which would mean that we should be seeing more of these in the near future."

Doctoral student Thomas Holoien led the observations and analysis of the TDE when it first flared to brightness on January 25, 2014. It appeared near the back left "foot" of Ursa Major, between the stars Alula Borealis and Praecipua. He labeled the object ASASSN-14ae, and at first he thought it was a supernova, albeit an unusual-looking one. But its brightness pattern ultimately indicated something else, and he and his colleagues determined that they were seeing a TDE.

They did follow-up ground observations via the 1-meter robotic telescope at McDonald Observatory, the 2-meter robotic Liverpool Telescope, the 3.5-meter Apache Point Observatory telescope, and the double 8.4-meter Large Binocular Telescope. Then they added space-based observations from the Swift UltraViolet and Optical Telescope. Finally, they used Sloan Digital Sky Survey archival data to place the object within its host galaxy, called SDSS J110840.11.

Based on the amount of energy released during the event, the researchers calculated that a relatively small amount of stellar material—only one thousandth of the mass of our sun, an amount approximately equal to the mass of the planet Jupiter—had been sucked into the black hole.

Study co-author Christopher Kochanek, professor of astronomy at Ohio State and the Ohio Eminent Scholar in Observational Cosmology, was among the first experts to model TDEs 25 years ago, as a graduate student. Only a handful have been spotted since then, however, and nobody knows for sure how important a contribution TDEs might make to the growth of black holes in the universe.

Conventional wisdom suggests that black holes don't consume whole stars all that often—maybe only once every 10,000-100,000 years, Kochanek said. But how often black holes tear off just a piece of a passing star is an open question. "The issue is that the chances of a black hole partly shredding a star may not be all that different from the chances of it completely shredding a star. We just don't know," Kochanek said.

ASAS-SN may help provide the answer. The survey is hosted by the Las Cumbres Observatory Global Telescope Network, with four 15-centimeter telescopes at Haleakala Observatory in Hawaii and two in Cerro Tololo, Chile. These are relatively low-powered telescopes, Stanek explained, but they are ideal for taking detailed studies of the entire nearby universe at low cost.

The survey is enjoying some success in its first year of operation; about half of all bright, nearby supernovae discovered since May 2014 were discovered by ASAS-SN. It's a promising beginning to a project meant to enhance our understanding of the stars, galaxies, and galactic superclusters close to home.

"There's only one local neighborhood," Stanek said. "It's like getting the local newspaper. You want to know what your neighbors did."