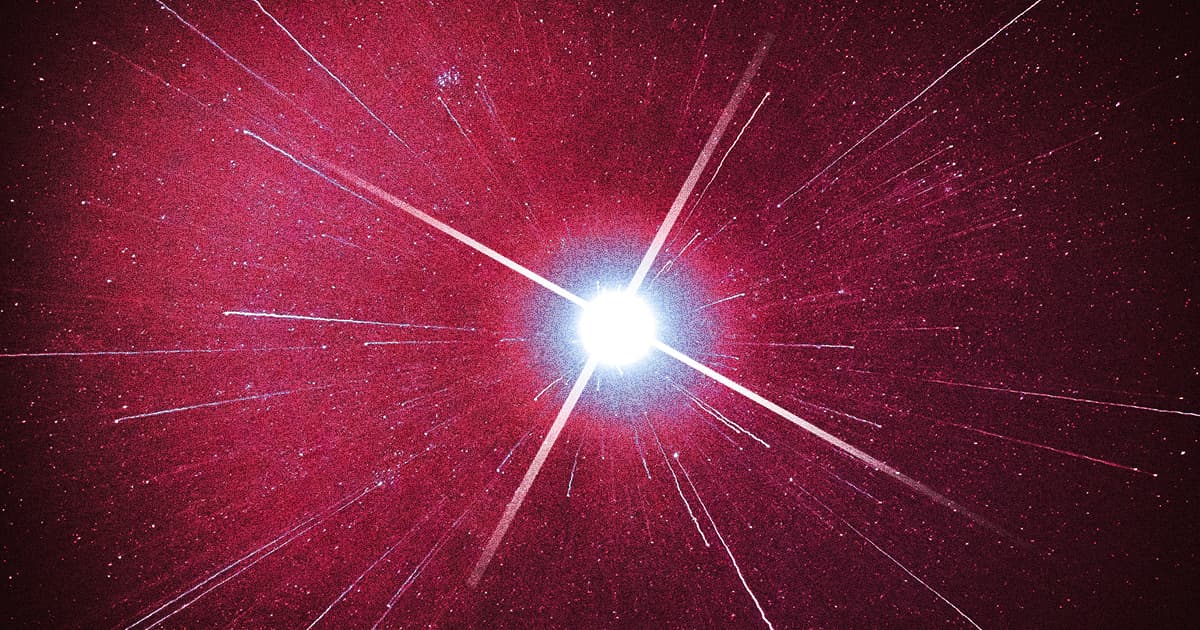 There are a lot of stars in the universe — and while there are many different types, pretty much all of them shine consistently.

That's why scientists were so puzzled to discover an "exceptionally rare" star, located toward the center of our own galaxy, that appears to be blinking on and off.

The star in question, which is 100 times the size of our own Sun and which has been dubbed VVV-WIT-08 — the "WIT" stands, charmingly, for "what-is-this" — didn't quite disappear, but its brightness decreased by a factor of 30, rendering it all but invisible.

"Occasionally we find variable stars that don't fit into any established category, which we call 'what-is-this?', or 'WIT' objects," said University of Hertfordshire researcher Philip Lucas, one of the discoverers of the strange star, in a press blurb. "We really don't know how these blinking giants came to be."

The researchers are considering numerous possibilities that could explain the blinking star. One is that something huge and dark drifted between our telescope and the star, though the astronomers say that's statistically unlikely. Another is that a planet orbiting the star, surrounded by a huge dust cloud, periodically blocks it out almost entirely. That second possibility wouldn't be entirely unheard of, the researchers point out, although the handful of other stars believed to be displaying similar behavior dimmed much less during the blockage.

The big takeaway for now? The universe holds a seemingly bottomless supply of cosmic surprises.

READ MORE: Astronomers spot a 'blinking giant' near the centre of the Galaxy [University of Cambridge]

Read This Next
Horrible Geese
Furious Geese Are Defeating Humans, Scientists Find
Quacks Like a Duck
Those Headlines About Scientists Building a Wormhole Are Total Nonsense, People
Falling In
Objects We Thought Were Black Holes May Actually Be Wormholes, Scientists Say
Bangs and Bounces
Scientists Say Stuff Might Have Been Happening Before the Big Bang
Clusterf***
There's Something Strange About How These Stars Are Moving, Scientists Say
More on Hard Science
Tractor Beam
2:13 PM on the byte
Scientists Build Working Tractor Beam, Although It's Comically Tiny
Having a Blast
Jan 18 on the byte
New Study Shows Where You Should Hide to Survive a Nuclear Attack
Offworld Amino
Jan 15 on the byte
Scientists Find Building Blocks of Life in Meteor That Smashed Into Family's Driveway
READ MORE STORIES ABOUT / Hard Science
Keep up.
Subscribe to our daily newsletter to keep in touch with the subjects shaping our future.
+Social+Newsletter
TopicsAbout UsContact Us
Copyright ©, Camden Media Inc All Rights Reserved. See our User Agreement, Privacy Policy and Data Use Policy. The material on this site may not be reproduced, distributed, transmitted, cached or otherwise used, except with prior written permission of Futurism. Articles may contain affiliate links which enable us to share in the revenue of any purchases made.
Fonts by Typekit and Monotype.