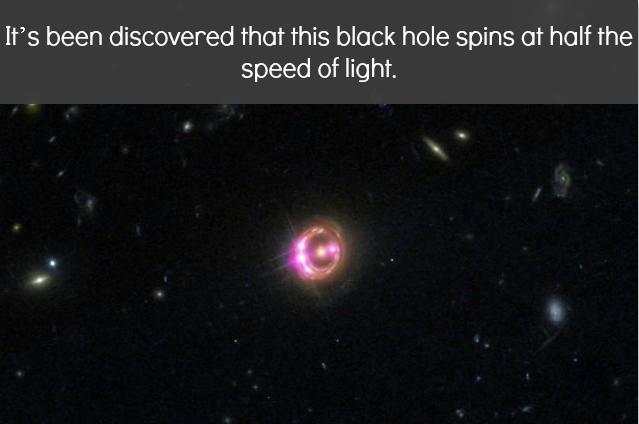 Black holes are some of the most amazing structures in the universe. They are truly the tyrants of the cosmos—consuming moons, planets, stars, and entire solar systems without batting an eye.

However, black holes are more than just cosmic vacuum cleaners; they are fast, terrible fast. In fact, astronomers recently discovered a black hole that is spinning at half the speed of light. Yes, that’s 50% the speed of light, or a staggering 93,141 miles per a second (149,896 km/sec).

The black hole in question lies at the center of a quasar, RX J1131-1231, which can be found drifting from the cosmos some 6 billion light-years from Earth. The fact that scientists were able to measure the spin of this monster is particularly noteworthy as 6 billion light-years is rather far away, even for our most modern telescopes. However, scientists were able to get a detailed reading, all thanks to a giant elliptical galaxy stationed about halfway between our own little world and RX J1131-1231.

This galaxy bends the light that is given off by the black hole (this process is known called “gravitational lensing”). The bending focuses the distant light of the black hole, making it easier to measure. Of course, once a black hole consumes matter, it is essentially lost to us. So black holes don’t give off light per say. Rather, light (X-rays) are created by the bands of dust and gas that surround black holes (these are called accretion disks). The X-rays are produced when the accretion disk creates a multimillion-degree cloud (called a corona) near the black hole.

The scientists in charge of the study found that the X-rays in the cloud surrounding RX J1131-1231 were coming from a region that is so close to the black hole the the black hole must be spinning extremely rapidly, otherwise this heated cloud would not be able to survive at such a small radius.

Ultimately, the speed at which this black hole spins is notable as it corresponds to models that predict how black holes develop and grow. Our projections indicate that, the more matter that black holes consume, the faster they spin. RX J1131-1231 is spinning rather rapidly (to put it mildly) and it is consuming a lot of material, about the equivalent of one sun each year. In the end, these two facts come together to support what computer models currently predict about black hole development.

However, this black hole is far from the fastest. There is another, NGC1365, which was clocked at a mind-blowing 85% the speed of light. NGC1365 is approximately 60 million light-years from Earth, at the center of a spiral galaxy. What’s more, the black hole is some 1.9 million miles (3.2 million km) in diameter and it has a mass two million times that of our Sun. However,  RX J1131-1231 is much younger than NGC1365, and so it has had far less time to speed up .

Ultimately, this is the first time that scientists have been able to use gravitational lensing to get accurate readings from a black hole this distant, so it’s rather exciting to consider what future research of these supermassive beasts might uncover.