Scientists May Have Solved the Mystery Behind Pluto's "Bladed Terrain"

The study advances our understanding of Pluto's global geography and topography. 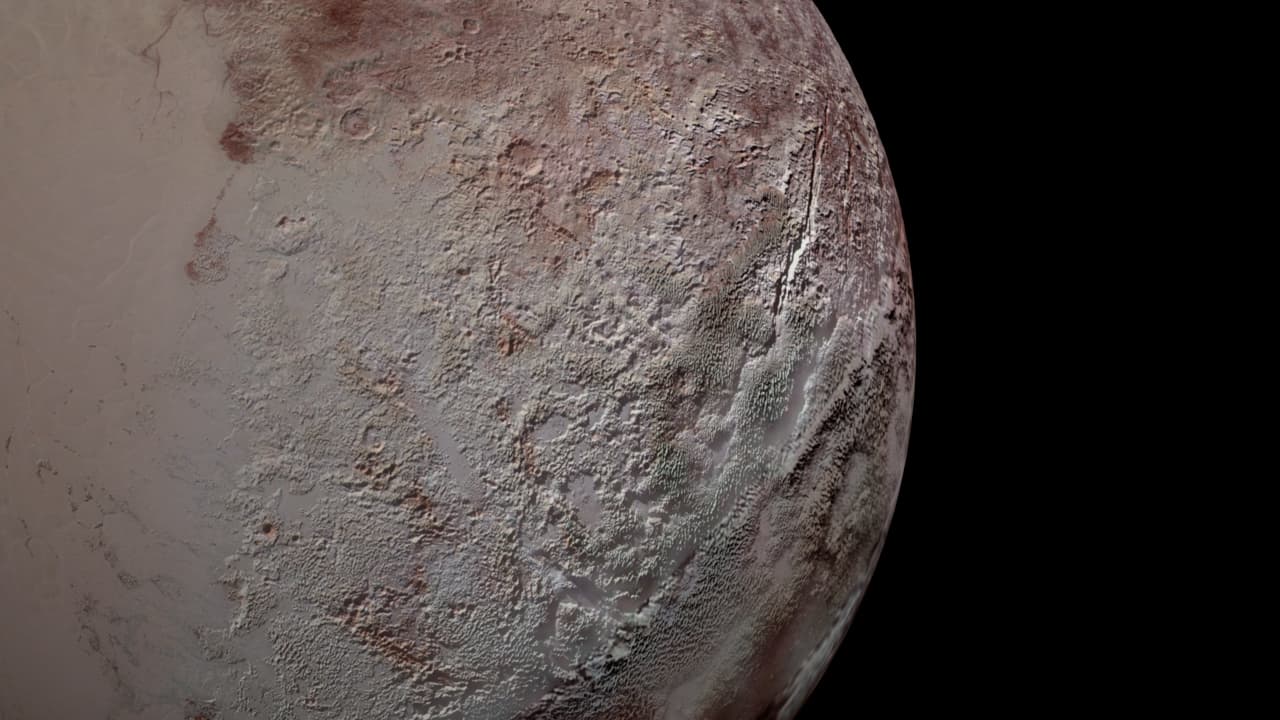 When it made its historic flyby of Pluto in July of 2015, the New Horizons spacecraft gave scientists and the general public the first clear picture of what this distant dwarf planet looks like. In addition to providing breathtaking images of Pluto’s “heart”, its frozen plains, and mountain chains, one of the more interesting features it detected was Pluto’s mysterious “bladed terrain”.

Ever since the New Horizons probe provided a detailed look at Pluto’s geological features, the existence of these jagged ridges has been a source of mystery. They are located at the highest altitudes on Pluto’s surface near it’s equator, and can reach several hundred feet in altitude. In that respect, they are similar to penitentes, a type of structure found in high-altitude snowfields along Earth’s equator.

These structures are formed through sublimation, where atmospheric water vapor freezes to form standing, blade-like ice structures. The process is based on sublimation, where rapid changes in temperature cause water to transition from a vapor to a solid (and back again) without changing into a liquid state in between. With this in mind, the research team considered various mechanisms for the formation of these ridges on Pluto.

What they determined was that Pluto’s bladed terrain was the result of atmospheric methane freezing at extreme altitudes on Pluto, which then led to ice structures similar to the ones found on Earth. The team was led by Jeffrey Moore, a research scientist at NASA’s Ames Research Center who was also a New Horizons’ team member. As he explained in a NASA press statement:

“When we realized that bladed terrain consists of tall deposits of methane ice, we asked ourselves why it forms all of these ridges, as opposed to just being big blobs of ice on the ground. It turns out that Pluto undergoes climate variation and sometimes, when Pluto is a little warmer, the methane ice begins to basically ‘evaporate’ away.”

But unlike on Earth, the erosion of these features are related to changes that take place over the course of eons. This should come as no surprise seeing as how Pluto’s orbital period is 248 years (or 90,560 Earth days), meaning it takes this long to complete a single orbit around the Sun. In addition, the eccentric nature of it orbit means that its distance from the Sun ranges considerably, from 29.658 AU at perihelion to 49.305 AU at aphelion.

When the planet is farthest from the Sun, methane freezes out of the atmosphere at high altitudes. And as it gets closer to the Sun, these ice features melt and turn directly into atmospheric vapor again. As a result of this discovery, we now know that the surface and air of Pluto are apparently far more dynamic than previously thought. Much in the same way that Earth has a water cycle, Pluto may have a methane cycle.

This discovery could also allow scientists to map out locations of Pluto which were not photographed in high-detail. When the New Horizons mission conducted its flyby, it took high-resolution pictures of only one side of Pluto – designated as the “encounter hemisphere”. However, it was only able to observe the other side at lower resolution, which prevented it from being mapped in detail.

But based on this new study, NASA researchers and their collaborators have been able to conclude that these sharp ridges may be a widespread feature on Pluto’s “far side”. The study is also significant in that it advances our understanding of Pluto’s global geography and topography, both past and present. This is due to the fact that it demonstrated a link between atmospheric methane and high-altitude features. As such, researchers can now infer elevations on Pluto by looking for concentrations of methane in its atmosphere.

Not long ago, Pluto was considered one of the least-understood bodies in our Solar System, thanks to its immense distance from the Sun. However, thanks to ongoing studies made possible by the data collected by the New Horizons mission, scientists are becoming increasingly familiar with what its surface looks like, not to mention the types of geological and climatological forces that have shaped it over time.

And be sure to enjoy this video that details the discovery of Pluto’s bladed terrain, courtesy of NASA’s Ames Research Center:

Read This Next
Jupiter Jokesters
Nitwits Claim Wrongly to Have Disproved the Existence of Jupiter
Free Galileo
Scientists Call for Making Pluto a Planet Again
Ultima Thule
New Horizons Will Fly Past the Most Distant Object We've Ever Visited
Futurism
Alan Stern: We Are Returning to Pluto
Futurism
Scientists Weigh in On the Possibility of Life in Pluto's Oceans
More on Off World
Grrrrrrrr
Yesterday on the byte
Internet Erupts as NASA Spots Cartoon Bear on Surface of Mars
Gl1tc4
Yesterday on the byte
NASA Says Another James Webb Instrument Has Suffered a Glitch
comet Spotting
Yesterday on the byte
Behold! Dazzling Green Comet Approaches
READ MORE STORIES ABOUT / Off World
Keep up.
Subscribe to our daily newsletter to keep in touch with the subjects shaping our future.
+Social+Newsletter
TopicsAbout UsContact Us
Copyright ©, Camden Media Inc All Rights Reserved. See our User Agreement, Privacy Policy and Data Use Policy. The material on this site may not be reproduced, distributed, transmitted, cached or otherwise used, except with prior written permission of Futurism. Articles may contain affiliate links which enable us to share in the revenue of any purchases made.
Fonts by Typekit and Monotype.