Nitwits Claim Wrongly to Have Disproved the Existence of Jupiter 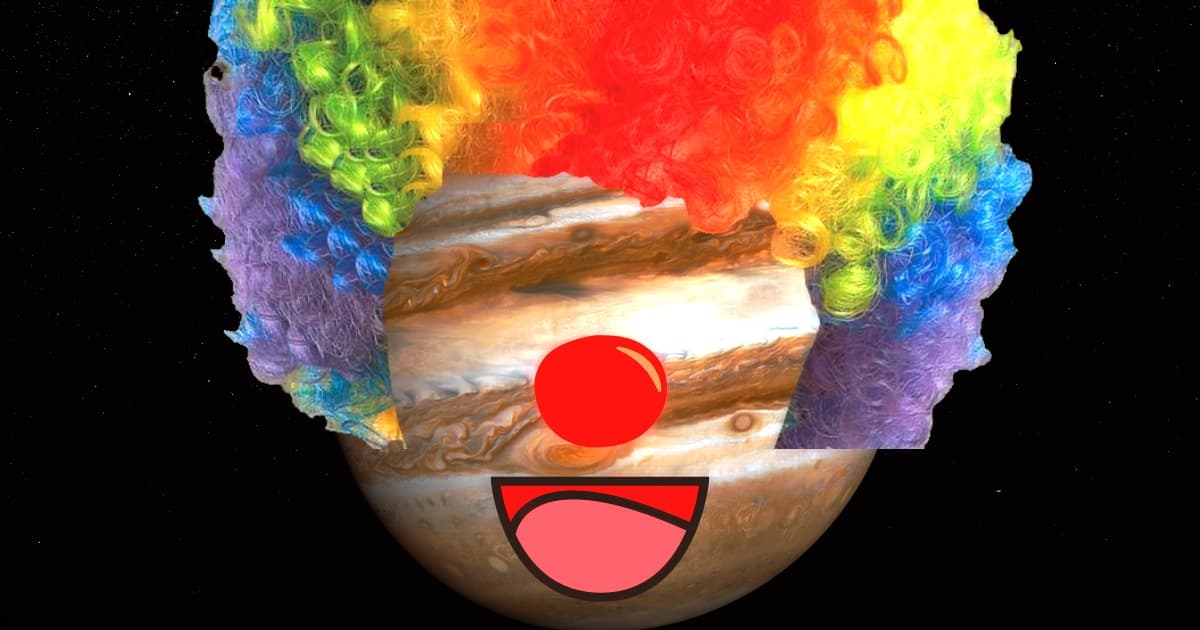 It feels like only yesterday we mourned the loss of our dearly departed planet Pluto. So it was hard to imagine losing another beautiful solar system buddy — but the good news is we don't have to, because the goofballs who tried to prove Jupiter doesn't exist are 100 percent wrong.

A meme has been circulating since 2021 that shows a soda can exploding in a vacuum. The claim seems to be that if a soda can can't survive space, there's no way a planet made of gas could hold together.

"This simple experiment, in which a soda can exposed to a vacuum environment explodes, demonstrates the impossibility of the existence of a pressurized environment within a vacuum without the presence of a suitable container," reads the hopefully meme, spotted by USA Today.

"'Gaseous planets' as NASA tells us cannot exist," the conspiracy concludes at the bottom.

It's worth asking whether the meme is facetious. The account that shared it, Flat Earth Research, is so over the top that it's difficult to ignore the possibility.

At the same time, though, many commenters seem to be taking the meme seriously, and there certainly are many people who, for reasons that defy comprehension, still think the Earth is flat. So let's go there.

First of all, it's pretty clear that gas giants do, in fact, exist. You can see several of them with the naked eye, for instance. And beyond our solar system, NASA currently reports more than 1,400 gas giant discoveries on its website and defines a gas giant as a large planet mostly composed of helium, hydrogen, or both. Like Jupiter and Saturn, these planets don’t have hard surfaces and instead feature swirling gas around a solid core.

Likening a gas giant to a soda can is more than a little reductive, and it's also why the experiment doesn't debunk NASA's research. Elise Knittle, an Earth and planetary sciences professor at University of California, Santa Cruz, told USA Today that aluminum cans are pressurized to hold in the fizz from the carbon dioxide. The strength of the can and outside atmospheric pressure hold the soda in the can, but when dropped into a vacuum the pressure differential is great that the can ruptures.

It takes a BIG object to have enough self-gravity to hold together, which planets have, but soda cans don't.

"The gravity is so great from the planet that it counteracts the pressure gradient between outer space and the planet," Knittle told the pub.

It's also worth mentioning that, you know, our very own Sun is a giant ball of burning gas and seems to hold its shape just fine. Every star does the same.

Nice try, Jupiter-deniers, but we're not falling for your tricks. Tell the government we want Pluto back, too.

More on our love affair with Jupiter: NASA Scientists Predict Settlements on Moons of Saturn, Jupiter

Read This Next
Monkey Business
China Plans to Send Monkeys to Space Station to Have Sex With Each Other
Overview Effect
William Shatner Says His Space Trip Left Him With a Feeling of Terrible Grief
Astronaut Drip
We Just Got the First Peek at NASA's Artemis Moon Landing Suits
Blast Off
Former Astronaut Details Quest to Grow Cannabinoids in Space
RIP
Unfortunate Comet Flies Too Close to the Sun, Disintegrates and Becomes a Ghost
More on Off World
Infra-Red Alert
Yesterday on the byte
James Webb Reveals Mysteriously Powerful "Engine" of Two Merging Galaxies
Die to Fight Anot...
Yesterday on the byte
Mysterious Russian Satellite Explodes
Heavy Metal
Tuesday on the byte
NASA Mars Rover Finds Metallic Object That Smashed Down on Surface
READ MORE STORIES ABOUT / Off World
Keep up.
Subscribe to our daily newsletter to keep in touch with the subjects shaping our future.
+Social+Newsletter
TopicsAbout UsContact Us
Copyright ©, Camden Media Inc All Rights Reserved. See our User Agreement, Privacy Policy and Data Use Policy. The material on this site may not be reproduced, distributed, transmitted, cached or otherwise used, except with prior written permission of Futurism. Articles may contain affiliate links which enable us to share in the revenue of any purchases made.
Fonts by Typekit and Monotype.