The first humans could land on Saturn's moons before the year 2100. 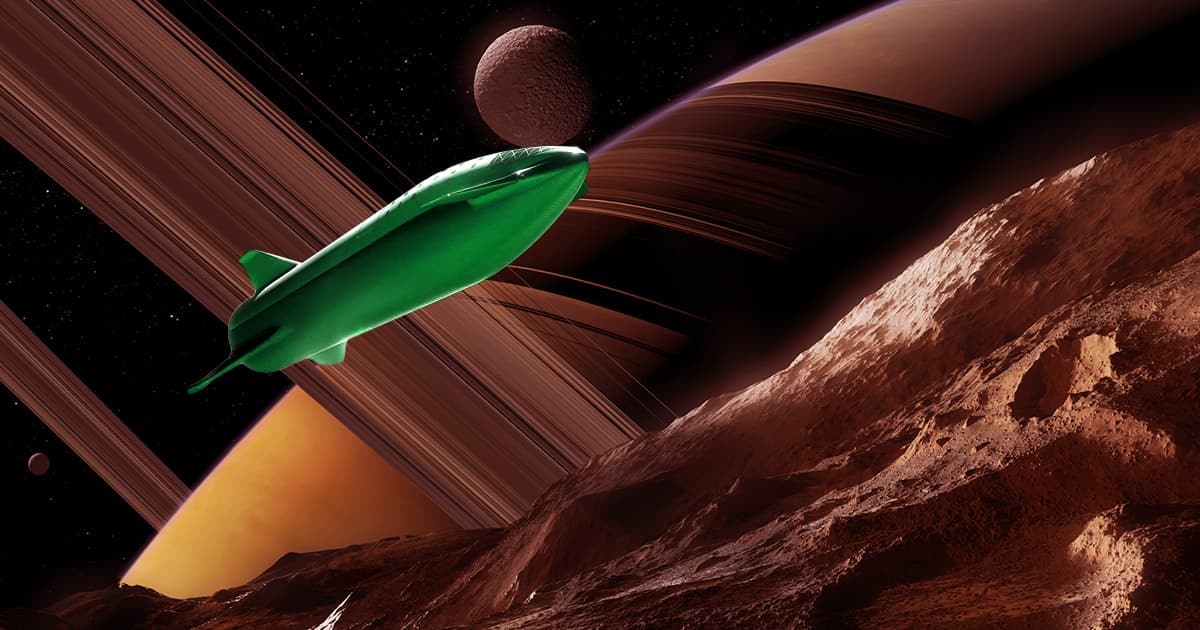 Scientists from NASA's Jet Propulsion Lab in California are projecting that humanity could become a multi-world species in a much shorter timeframe than one might think.

And the clock is ticking, as the team argues in a preprint paper published in July.

"Beginning with the development and deployment of the first nuclear weapons near the end of World War II, humanity entered a ‘Window of Peril’ which will not be safely closed until robust off-world colonies become a reality," the paper reads.

"Our findings suggest the first human-crewed missions to land on Mars, selected Asteroid Belt objects, and selected moons of Jupiter and Saturn can occur before the end of the 21st century," they argue.

By the 23rd century, we could reach the ends of the Solar System, and by the end of the 24th century, we could start traveling to other star systems. It's a refreshingly out-of-the-box thought experiment that illustrates the importance of humans finding a home away from home — a sentiment long held by SpaceX CEO Elon Musk.

And without a strong push into deep space, they argue, humanity could be doomed.

"An aggressive and sustained space exploration program, which includes colonization, is thus seen as critical to the long-term survival of the human race," they write.

It's one possible response to Fermi's Paradox. That theory, brought forward by Nobel laureate Enrico Fermi in 1950, brought attention to the lack of clear evidence of extraterrestrial life, despite the incomprehensible number of stars and planets in the known universe.

And on a practical level, humanity is facing several existential threats, including nuclear war, climate change, and of course the menace of yet another pathogen spreading across the globe. And that's not to mention asteroid impacts, erupting super-volcanoes, or runaway artificial intelligence.

There may be an obvious solution: getting the hell off of Earth.

But how long would that take? To arrive at an answer, or at least an estimate, the NASA team crunched the numbers.

Instead of taking every possible piece of human knowledge about the cosmos into account, a Herculean task, the team decided to key in on computing power — the number of processors in a single microprocessor to be precise — which could eventually enable us to travel to the far reaches of space and establish off-world colonies.

The more computing power, the better we are at building out the kind of technologies that will allow us to embark on deep space missions.

Their conclusion: we could land the first humans on Mars by 2038, and in the Asteroid Belt around the year 2064. And we could get to Proxima Centauri, the closest neighboring star system, by 2254.

"By creating at least one, and preferably multiple, self-sustaining and genetically viable off-world colonies, humanity can best assure its long-term survival from both natural and human-caused calamities that threaten life on Earth," the team concludes.

And the stakes couldn't be higher.

"Off-world colonization, like the Great Filter’s self-annihilation, is within humanity’s reach — which we choose as our future will constitute Earth’s reply to Fermi’s Paradox," they wrote.

Read This Next
Futurism
The Inside Scoop on Elon Musk's Plan to Make "Insurance for Life as We Know It"
Futurism
Neil deGrasse Tyson Reveals When He Thinks We’ll Find Aliens
More on Off World
Cat and Mouse
3:38 PM on the byte
SpaceX to Launch "Hunter" Satellites for Targeting Rival Spacecraft
Space In Space
1:44 PM on the byte
NASA Official Admits There's a Bit of an Issue on the Space Station
No More Hops, Mor...
Yesterday on the byte
Suggestion: NASA Should Make Its Mars Helicopter Do Some Gnarly Tricks From "Tony Hawk"
READ MORE STORIES ABOUT / Off World
Keep up.
Subscribe to our daily newsletter to keep in touch with the subjects shaping our future.
+Social+Newsletter
TopicsAbout UsContact Us
Copyright ©, Camden Media Inc All Rights Reserved. See our User Agreement, Privacy Policy and Data Use Policy. The material on this site may not be reproduced, distributed, transmitted, cached or otherwise used, except with prior written permission of Futurism. Articles may contain affiliate links which enable us to share in the revenue of any purchases made.
Fonts by Typekit and Monotype.