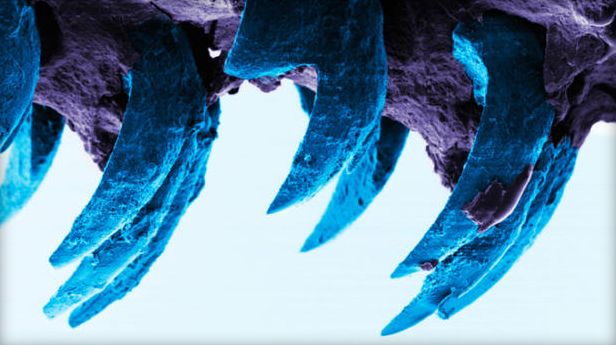 We use nature as a guide for producing a lot of different technologies. We watch birds fly, and we dream of ways that we can soar across the skies with wing-like structures. We turn to the ocean, we see the way that fish glide through the waters, and then we use these principles to develop fins for our feet, allowing us to travel through the sea at increased speeds. Now, we may be turning to a new part of nature in order to develop ways to create stronger materials. Where will we be looking? Apparently, at the teeth of tiny snail-like creatures.

In a study that will be coming out this month from the Journal of the Royal Society Interface, British researchers announce that they have discovered the strongest natural material known to man. It was found in the teeth of shelled, aquatic creatures that are known as limpets. Ultimately, the teeth take the place of the previous strongest biological material on Earth—spider silk.

Lead author Asa Barber said that this new find could help us adapt the material into technologies to build better planes, boats, dental fillings, and a host of other devices. Since this is the strongest known "natural" material, some may think that the material that makes up the teeth are only strong when compared to other natural materials. However, they also beat many of our more impressive man-made materials. For example, the teeth surpass Kevlar, which is a synthetic fiber that we use to make bulletproof vests and puncture-proof tires.

To give you a better understanding of just how strong this material is, it  can be compared to a strand of spaghetti that is able to hold up more than 3,300 pounds (1,300 kg).

In order to test the strength of this material, Barber looked at the teeth fibers for tensile strength (tensile strength is the amount of force that a material can withstand without breaking). To do this, he attached each end of the fiber to a lever and pulled on the sample with an atomic force microscope. He found that the material had a strength of 5 gigapascals, which is a staggering five times the strength of most spider silks (which, as was mentioned, was the previous contender for the strongest known material).

The teeth are composed of very thin fibers that contain a hard mineral called "goethite." Limpets use them to scrape food off of rocks, and the key to their strength is their size. They are so small they must be examined with a microscope. and are just 1/100th the diameter of a human hair. The ultra-thin filaments are so little that they are able to avoid the holes and defects that we commonly find in larger materials.

Although they are very small, they can be put together in order to make larger materials that are similarly flawless—they do no weaken like most materials when constructed in such a manner.

“Generally a big structure has lots of flaws and can break more easily than a smaller structure, which has fewer flaws and is stronger,” Barber said in a university press release. “The problem is that most structures have to be fairly big so they’re weaker than we would like. Limpet teeth break this rule as their strength is the same no matter what the size."

Barber asserts that we should continue to look to nature, as we never know what new resources we may find there: “All the things we observe around us, such as trees, the shells of sea creatures and the limpet teeth studied in this work, have evolved to be effective at what they do. Nature is a wonderful source of inspiration for structures that have excellent mechanical properties.”