Scientists Sequence DNA They Found From 2 Million Years Ago 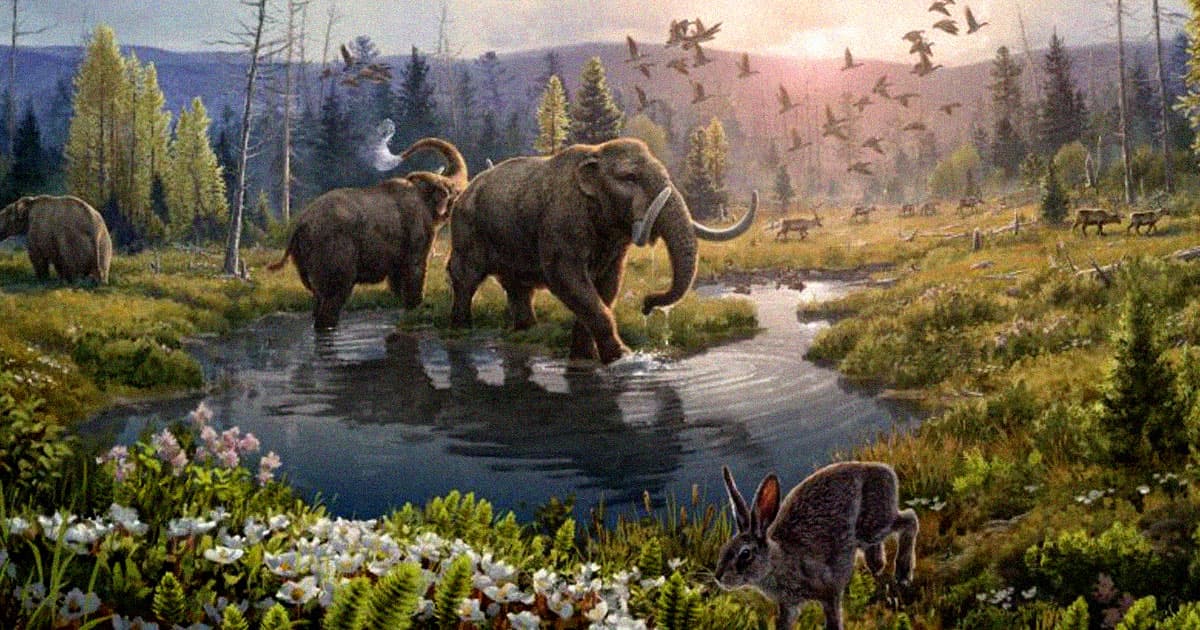 An international team of scientists has recovered 2 million years old DNA from a variety of plants, fish, and even an ancient mastodon.

It's the oldest DNA we've ever been able to analyze, MIT Technology Review reports, with the previous record set last year when scientists recovered partial genomes from a one-million-year-old Siberian mammoth.

The genetic material was collected from ancient sediment in Greenland, an area of the world that once harbored a far warmer climate that allowed a rich ecosystem of flora and fauna to flourish.

Some of the samples were taken from a 300-feet-thick deposit of clay and sand back in 2006 and stored in a freezer in Copenhagen.

The findings could give us clues as to how the local Greenland ecosystem was able to adapt to warming climates over the last two million years — and how current plant species may be able to adjust to a climate that's now warming even more rapidly.

"It's a climate similar to what we expect to face on Earth due to global warming," the University of Copenhagen's Eske Willerslev, senior author of a new paper about the project published in the journal Nature, told MIT Tech, "and it gives us some idea how nature can respond to increasing temperatures."

The fragments paint a fascinating picture of what Greenland may have looked like millions of years ago.

"It feels almost magical to be able to infer such a complete picture of an ancient ecosystem from tiny fragments of preserved DNA," University of California, Santa Cruz paleogeneticist Beth Shapiro told the New York Times.

The recovered DNA includes fragments from flowering plants and trees, species that haven't been spotted in the area in a long time.

"This is an ecosystem with no modern analogue," Willerslev told MIT Tech. "It’s a mixture between arctic species and temperate species."

The fact that DNA remains of a mastodon, an ancient and long extinct relative of the elephant, were found in the area surprised scientists.

"Not in a million years would you expect a mastodon up there," Love Dalén, a paleontologist at the Swedish Museum of Natural History, who was not involved in the study, told Nature.

"Reindeers, according to paleontologists, should not have survived; they shouldn’t even exist at that time," Willerslev told Nature.

The samples were only recoverable thanks to freezing temperatures and the fact that they were bound to clay and quartz, slowing down DNA degradation significantly.

In short, it's a tremendous achievement of modern science, enabled by cutting-edge gene sequencing technologies and providing an exceedingly rare snapshot into our planet's distant past — and perhaps a glimpse of our future as well.

READ MORE: DNA that was frozen for 2 million years has been sequenced [MIT Technology Review]

Read This Next
Futurism
Plan to Create a Genetic Rolodex of Life on Earth Could Save Lives
Futurism
Watch: Do We Really Share 99% of Our DNA With Chimps?
Futurism
NASA Images Have Revealed a Massive New Crack on the Petermann Glacier
Futurism
Greenland's Ice Caps Have Passed the Point of No Return
More on Earth & Energy
Stem Ware
Friday on the byte
Scientists Discover World's Oldest Preserved Vertebrate Brain
From Bad to Worse
Thursday on the byte
Global Warming Is Worse Than We Thought, AI Tells Scientists
RIP Fred
Thursday on the byte
Instead of Predicting Length of Winter, Groundhog Simply Dies
READ MORE STORIES ABOUT / Earth & Energy
Keep up.
Subscribe to our daily newsletter to keep in touch with the subjects shaping our future.
+Social+Newsletter
TopicsAbout UsContact Us
Copyright ©, Camden Media Inc All Rights Reserved. See our User Agreement, Privacy Policy and Data Use Policy. The material on this site may not be reproduced, distributed, transmitted, cached or otherwise used, except with prior written permission of Futurism. Articles may contain affiliate links which enable us to share in the revenue of any purchases made.
Fonts by Typekit and Monotype.