A crack in one of Greenland's glaciers has scientists baffled and worried.

In this era of global warming, cracks in ice sheets are, unfortunately, not all that rare or surprising anymore. However, the massive rift that was just spotted by Dutch scientist Stef Lhermitte from Delft University of Technology in Greenland’s Petermann Glacier, which boasts the largest ice shelf in the Northern Hemisphere, is particularly worrying.

After being alerted to the crack via Lhermitte’s Twitter account, NASA’s cryosphere-monitoring initiative, Operation IceBridge, flew out to take new images and confirmed that the situation is worse than expected. 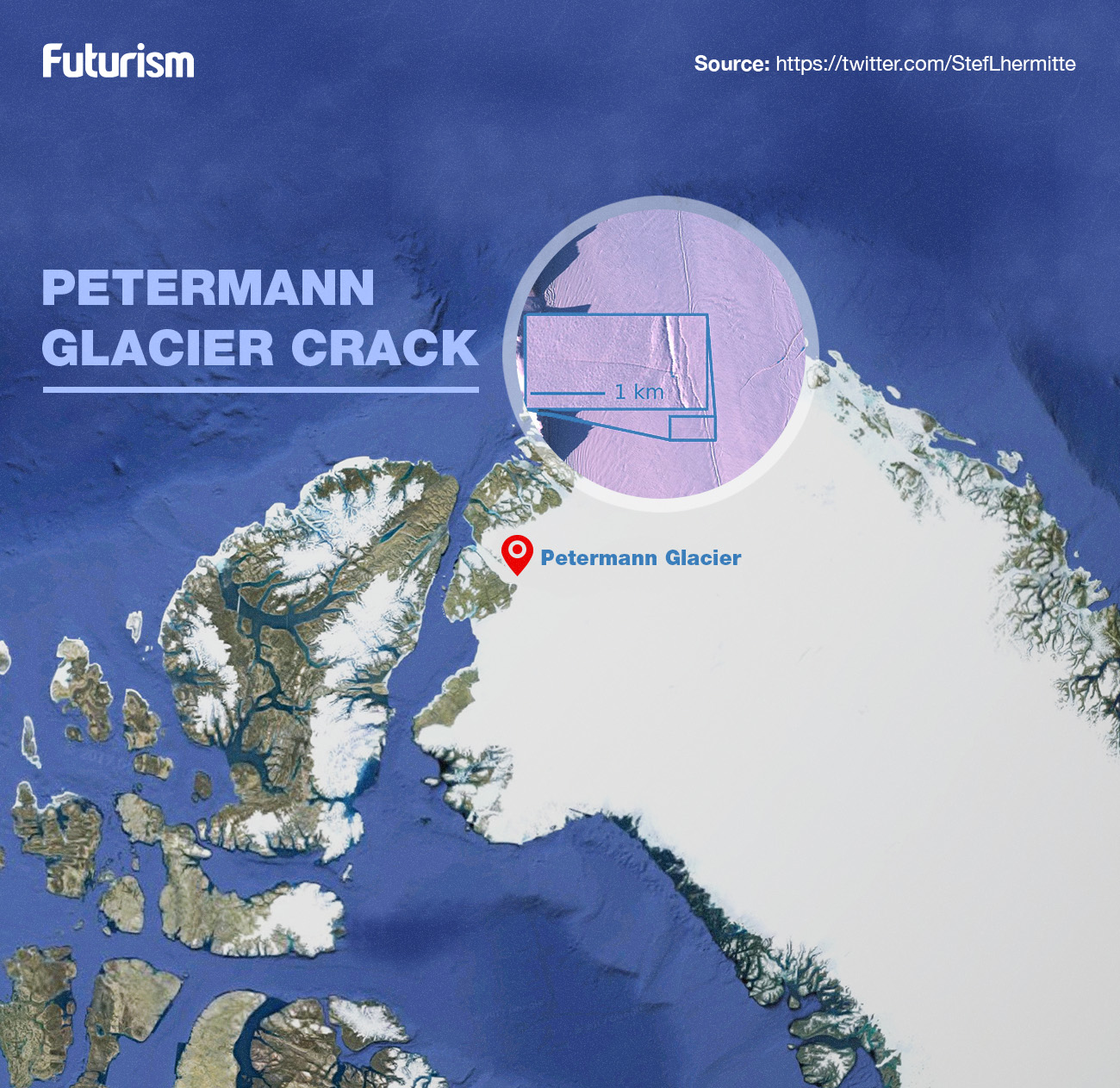 Typically, glacial cracks happen along the edges of a glacier where ice melts. This particular crack, however, is actually cutting through the middle of the glacier’s ice shelf, the portion of the glacier that floats over the ocean. The farther inland a crack is, the greater its chances of causing a glacier to destabilize. The location of this new crack implies that the ice shelf has actually gotten too thin in the middle.

Quite simply, the fact that this pretty significant glacier is disintegrating right before our eyes is very worrying. Scientists still don’t know for sure how the crack even started or what will happen next. In addition, this current rift is also inching closer to an older one. If the cracks meet, it could cause a calving event that would cause a massive chunk of the iceberg to break off.

Calving events regularly take place and are actually an important part of an ice sheet’s life cycle. But unusual rifts raise questions about how changes in the environment are affecting calving rates. Annually, around 8mm (0.3 inches) of water from the oceans goes into Antarctica and Greenland ice sheets as snowfall. If no ice returns to the oceans, sea level will go down by 8mm each year.

Researchers have yet to determine if the volume of ice going in and coming out is equal, but the mass balance (the difference between ice input and output) will affect global sea levels. To put this into context, according to the U.S. Geological Survey (USGS), sea levels would rise 80 meters (256 feet) if all of the glacial ice on Earth melted, causing flooding in coastal cities across the planet.

Scientists believe that the rifting will continue as we approach summer, and it could actually cause the shelf to break off into a massive iceberg and float away. To truly understand what’s causing the ice shelf to thin, however, the team has to conduct further research. One thing is for certain, the effects of climate change are quickly proving to be both drastic and, in many cases, irreversible.