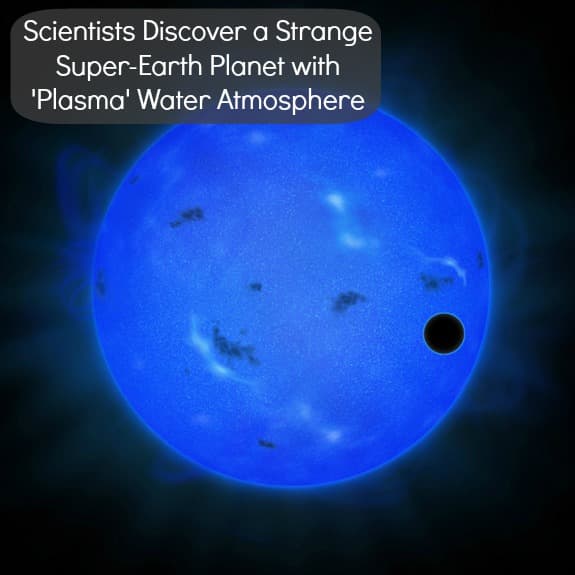 In recent years, astronomers have discovered a host of strange worlds—they discovered a planet that has a year that is only 4 Earth-hours long, and another that seems to be made almost entirely of diamond. Now, we have another strange planet to add to this list: Gliese 1214 b. This alien planet is nearly six times the size of the Earth, which means that the planet finds itself somewhere between the Earth and our solar system's ice giants (Uranus and Neptune) in size. What’s more, it is covered with a water-rich atmosphere. That sounds promising, doesn’t it? At first glance, maybe. It is a huge planet with an abundance of water; however, this planet seems to include a strange "plasma form" of water.

Ultimately, it is the high temperature and density of the planet that gives it an atmosphere that is so dramatically different from the atmosphere found on Earth. For starters, Gliese 1214 b orbits its star once every 38 hours, making it 70 times closer than Earth is to the Sun. Since it is so close, the temperatures on the planet reach up to 540 degrees Fahrenheit (280 degrees Celsius), which is a little warm for most all Earth-based life.

The size of the planet is the next thing that contributes to the exotic form of water. Principle investigator Norio Narita  notes that, "as the temperature and pressure are so high, water is not in a usual form (vapor, liquid, or solid), but in an ionic or plasma form at the bottom the atmosphere — namely the interior — of Gliese 1214 b…..At high pressure and high temperature, the behavior of water is quite different from that on the Earth. At the bottom of the water-rich atmosphere of Gliese 1214 b, water should be a super-critical fluid."

A supercritical fluid is defined as any substance that exists at a temperature and pressure above its critical point (where distinct liquid and gas phases do not exist). Ultimately, this is just another reminder of how strange and amazing our universe is.