Scientists Discover New Element: Ununseptium, The Heaviest Element Ever Made 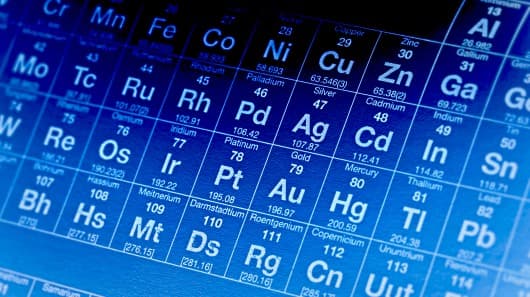 Scientists  just announced that they have created and observed a new super-heavy element— element 117, which had been temporarily dubbed "ununseptium." This element was one of the missing pieces of the periodic table of elements, and it could be a bridge to the long sought "island of stability" in super-heavy elements.

The name for this element comes from the fact that it has 117 protons in its nucleus. Elements containing this many protons do not occur naturally on Earth. Rather, as far as we have determined, the only way to create them on our planet is synthetically in a laboratory. Ultimately, this is why such elements are called "super-heavy" elements. This super-heavy classification includes all elements that occur after rutherfordium, which has 104 protons jammed into its center; however, uranium, which has 92 protons, is the heaviest element that can be commonly found in nature. Scientists generally artificially create elements that are heavier than uranium, which is done by adding protons into an atomic nucleus through nuclear fusion reactions.

Generally speaking, the more protons and neutrons that are added into an atomic nucleus, the more unstable an atom becomes. As a result, most super-heavy elements only exist for microseconds or nanoseconds before decaying (in case you were wondering, that's not very long). Because they exist for such a short time, it is hard to find practical applications for such elements. However, as previously mentioned, scientists believe that a "island of stability" exists somewhere on their periodic table. This island is characterized by a point at which super-heavy elements become stable again. Over the years, researchers have created heavier and heavier elements in the hopes of discovering just how large atoms can be, and in an attempt to determine whether or not this island actually exists.

This newest find brings us a bit closer to determining if this island actually exists.  As Horst Stöcker, scientific director at the GSI Helmholtz Center for Heavy Ion Research (the organization responsible for the discovery), noted in a statement, "The successful experiments on element 117 are an important step on the path to the production and detection of elements situated on the 'island of stability' of super-heavy elements."

Ununseptium was first reported in 2010 by a team working at the Joint Institute for Nuclear Research in Dubna, Russia. However, such reports require careful testing before they can be verified. Consequently, since then, scientists have been preforming tests to confirm the existence of the elusive new element.

Worried that ununseptium might be the (unfortunate) permanent name of this new element? Don't be. A committee from the International Union of Pure and Applied Chemistry (IUPAC), which is the international organization that has the responsibility of overseeing the inauguration of new elements and standardizing nomenclature in chemistry, will review the findings and decide whether to formally accept element 117. At such time, they will grant it an official name.