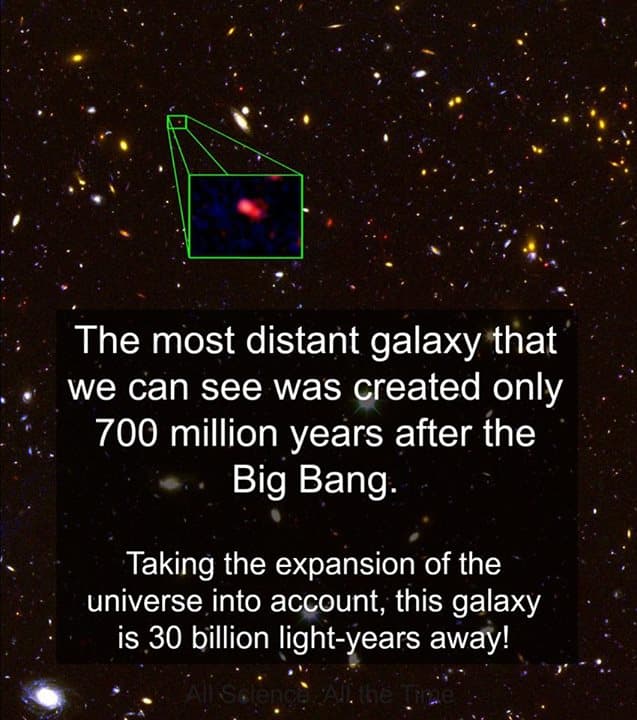 Lurking about 13.1-billion light-years away is the coolest galaxy that you'll hear about this year (seriously, it's awesome). What makes this wanderer so interesting? First, it has been dubbed with the exceedingly catchy name z8_GND_5296. Okay...so maybe the name is terribly bland and uninteresting, but don't let that fool you, because this galaxy is unique. At least, it is unique to us--it is the most distant galaxy ever discovered!

An international team of astronomers first observed this galaxy with the help of the Hubble Space Telescope. This find was recently confirmed by the Keck Observatory based in Hawaii. So, just how distant is z8_GND_5296? Well, it formed a mere 700-million years after the big bang, meaning that the galaxy is 30 billion light-years away. How did we determine this?

Astronomers measure a galaxy's distance by analyzing its redshift. As a general rule, the redder the galaxy appears, the farther away it is. GND takes the trophy of "farthest" galaxy from the previous champion (who had a redshift of 7.21) with a redshift of 7.51. If we account for velocity and time, z8_GND_5296 is about 30-billion light-years from Earth in real time.

So, in other words, this galaxy is really, REALLY far away.

The discovery of z8_GND_5296 and like galaxies is helping astronomers learn more about the early universe. These galaxies tend to be much more evolved than we originally thought they would be, but they are also churning out stars at an incredible rate. Their ability to make new stars so quickly can help us understand why these galaxies look so mature only a short time after the universe burst into existence.

In the coming years, with the launch of the new James Webb Telescope, scientists expect to find a lot more of these outer galaxies as we gain the ability to probe this region of spacetime.