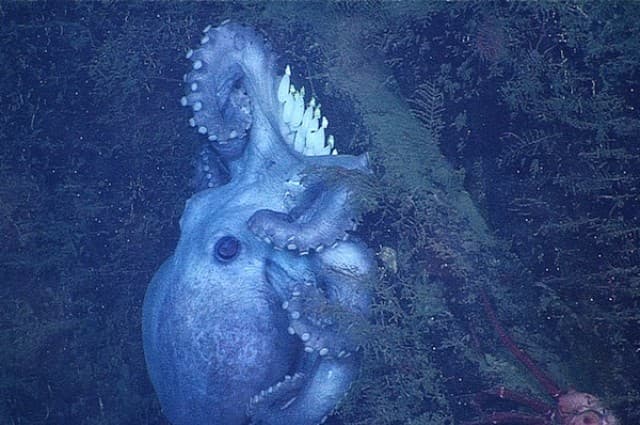 If you think that 9 months is a long time to wait for a baby, be glad that you are not an octopus. Researchers from the Monterey Bay Aquarium Research Institute (MBARI) recently announced the longest known brooding period for any species. The title goes to the deep-sea Graneledone boreopacifica, an octopus that guards its eggs for an astounding 4.5 years. This is the longest known brooding period of any animal on the planet.

Moreover, most octopus species don't live very long. They typical lifespan is just one to two years. Indeed, nearly all cephalopods (a grouping that includes squid, nautilus, octopus, and cuttlefish) are only known to live one or two years, which this octopus beats during its brooding time alone. Ultimately, this means that Graneledone boreopacifica is also the longest lived octopus.

Amazingly, over the course of the octopus' 53-month brooding period, the researchers never witnessed her feeding. This obviously had an impact on the octopus, and researchers watched as she grew paler, lost weight, her skin sagged, she her eyes grew cloudy. Researchers believe that the octopus was able to survive the lack of food because of her inactivity, which kept her metabolic demands low. Scientists associated with the study also note that it is possible that the octopus nibbled on some passing crabs or consumed some of the damages eggs; however, no such feedings were actually witnessed and the octopus did not eat a crab that the team offered her.

Ultimately, this level of dedication is extreme even for octopuses. Previously, the longest brooding octopus was the deep-sea Bathypolypus arcticus, which had a brooding time of some 14 months in the lab. For most shallow-water species, the brooding time lasts some three months. Obviously, the 53 month vigil of the Graneledone boreopacifica blows the shallow-water species out of the water. However, this particular octopus lives deep beneath the waters—some 1,397 meters (4,583 feet) deep in the Monterey Submarine Canyon. Because it is so costly and time consuming to reach these depths, little is known about the way that the average deep-sea octopus functions in its natural habitat. So these brooding patters may not be uncommon for other deep-sea species of octopus.

The researchers from MBARI, led by Bruce Robison, initially encountered the octopus (pictured above) in April 2007. When they returned the next month, they noticed that she was guarding a clutch of eggs. Over the course of the next four and a half years, the team made a total of 18 visits to see this octopus. They knew that it was the same octopus, and the same clutch, based on scars that were seen on the octopus and the growth of the eggs.  Robison tells Nature, "It went on and on, and we were just staggered. Every time we’d drop down to visit we’d say, 'This is the last time she’s going to be here.'" Ultimately, the eggs hatched in between the team's September and October 2011 trips. The work was published in PLoS One this week.

At these depths, temperatures are rather low. The waters averaged about 3 degrees Celsius (37 degrees Fahrenheit). And despite the fact that little is known about the deep-sea dwellers, scientists speculate that the baby octopuses’ long development period is due to the slow metabolism that is brought on by colder temperatures (which means that the cold waters are likely a contributing factor to the mother's sparse eating habits).

Since these particular baby octopuses had such a long time to develop, they could swim and hunt soon after their hatching. Obviously, this increases their odds of survival. In fact, these are the most highly developed octopus hatchlings known to date. However, as previously mentioned, the toll on the mother is rather steep. Generally, a female octopus will have one reproductive period in its life, and brooding will last about a quarter of its life. Once this period is over, the octopus usually dies. Yet, there is quite the legacy left behind. This clutch size was between 155 to 165 eggs.

Robison states, “We tend to think of parental care only in higher life-forms, but here’s a parent who is going all out to ensure the survival of her offspring.”