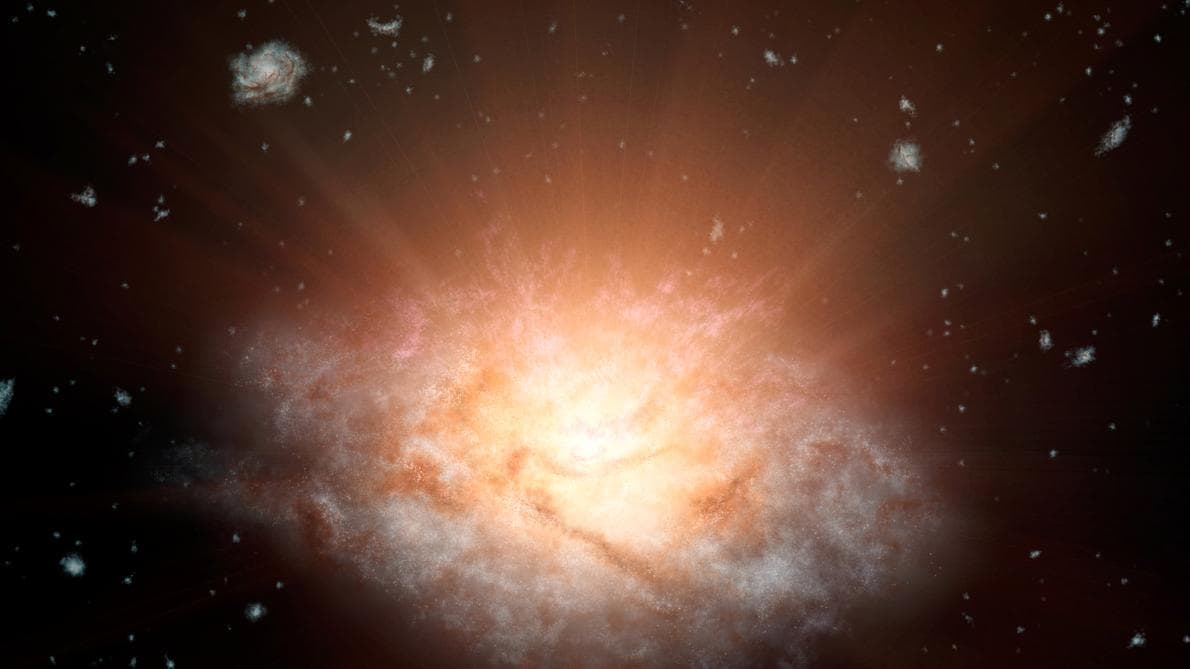 Astronomers just discovered the brightest galaxy in the known universe.

What we are really seeing is a “monster quasar,” says co-discoverer Peter Eisenhardt, who is an astronomer at NASA's Jet Propulsion Laboratory (JPL).

Quasars, or “quasi-stellar radio sources,” are the brightest and most distant star-like objects in the known universe. In fact, they are so bright and they emit so much energy, some of them are producing 10 to 100 times more energy than the entire Milky Way Galaxy in an area that’s comparable to the size of our own solar system.

Scientists generally agree that quasars are produced by supermassive black holes that are consuming matter. The radiation that we see comes from the accretion disk of these objects.

As the matter spins faster and faster, it heats up. Thus, giving off massive amounts of light and other forms of radiation such as x-rays, light rays, gamma rays, and radio waves (this heated material surrounding the black hole is the accretion disk).  Ultimately, the matter is heated to millions of degrees, which creates an intense beacon that can be seen across the universe (convenient, as that just so happens to be where we are).

According to a paper published in the Astrophysical Journal, this quasar weighs ten billion times the mass of the sun.

NASA’s orbiting Wide-field Infrared Survey Explorer (WISE) telescope detected this amazing galaxy. The "WISE" from the telescope is what gave this galaxy its name.

Ultimately, the detection of this galaxy raised a few questions. This beast was found lurking at the farthest edges of the visible universe, the light taking some 12.5 billion years to reach us. Since we are seeing this massive beast as it was just over a billion years after the big bang, astronomers are left wondering how a black hole could grow so big so fast.

Hopefully, the James Webb Space Telescope, which is currently under construction, will help us answer some of these questions.

The James Webb Space Telescope (JWST), is Hubble’s successor. It is set to be more sensitive by a factor of about 100 than all the other telescopes that have come before it (if we don't have any errors in the mirror, that is). This telescope will allow us to better image the first stars and black holes forming in the universe. We will be able to see farther and deeper than ever before.

You may have heard that JWST is primarily an infrared telescope. The reason for is the expansion of the universe.

We call the mechanism driving the expansion “dark energy.” And because space is expanding, light is stretched as it travels across the cosmos. Since it has such a far distance to travel in order to reach us, the most distant light is stretched so much that it enters the infrared part of the spectrum. Ultimately, this is why the JWST is primarily infrared.

In any case, once this telescope is launched, hopefully, we will get more detailed images and glimpse new objects, which will allows us to better understand how such large black holes could exist in such a young universe.