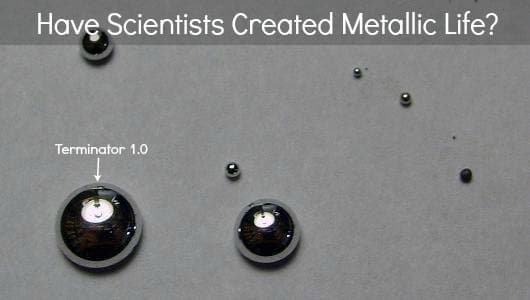 One of the greatest challenges facing scientists in the search for life is figuring out what life is and where it can thrive. As you’re probably aware, all life on Earth is carbon-based. Carbon is an extremely versatile element, so it provides a perfect foundation for life to form and evolve. However, does that mean that carbon is the only element that can support life? Previously, scientists have believed that life could form from other elements (namely silicon), but now we have some evidence to support this hypothesis.

Lee Cronin at the University of Glasgow has successfully created lifelike cells out of metal, such as tungsten (atomic number of 74). If creating lifelike metal wasn’t a big enough feat, Cronin also has reason to believe his metallic life is evolving. To that end, he has stated that he believes he can get evolution to work outside of ‘organic’ biology.

Cronin’s metallic cells are constructed from large polyoxometalates. An entire article could be devoted to explaining what a polyoxometalates is, suffice I to say, it is a structure consisting of three or more transition metal oxyanions.

Cronin has successfully gotten his cells to assemble into bubbly spheres that he calls Inorganic Chemical Cells, or iCHELLs. It takes more than a bubble structure to be cell-like and, more importantly, alive. Cronin has compared his iCHELLs to organic cells, noting that the iCHELLs possess an outer membrane that is able to select and separate chemicals allowing them inside or letting them outside the cell’s structure based on the chemical’s size. Altogether, not much different than the function a cell wall provides in organic cells.

The iCHELLs also have the ability to evolve; at least, that’s what Cronin claims. He embarked on a seven month experiment where he has put his iCHELLs into different environments in the hope that they would evolve separately from one another, adapting themselves to the specific environments in which they were placed – much in the same way organic cells do. The early results of this experiment have been promising and Cronin believes that he can demonstrate the iCHELLs actively evolving.

Whether or not Cronin’s metallic cells are eventually classified as being alive, he has made very important and historic advances in our understanding of what life is and the materials with which it can form. If Cronin, or other scientists, are able to build on this work and successfully create fully-living non-carbon-based cells, the implications would be staggering. All of the sudden, the odds of life forming elsewhere in the universe greatly increase because it has more building blocks to play with.