Scientists Create Holograms You Can See, Hear, and Feel

Watch a video of the amazing hologram in action. 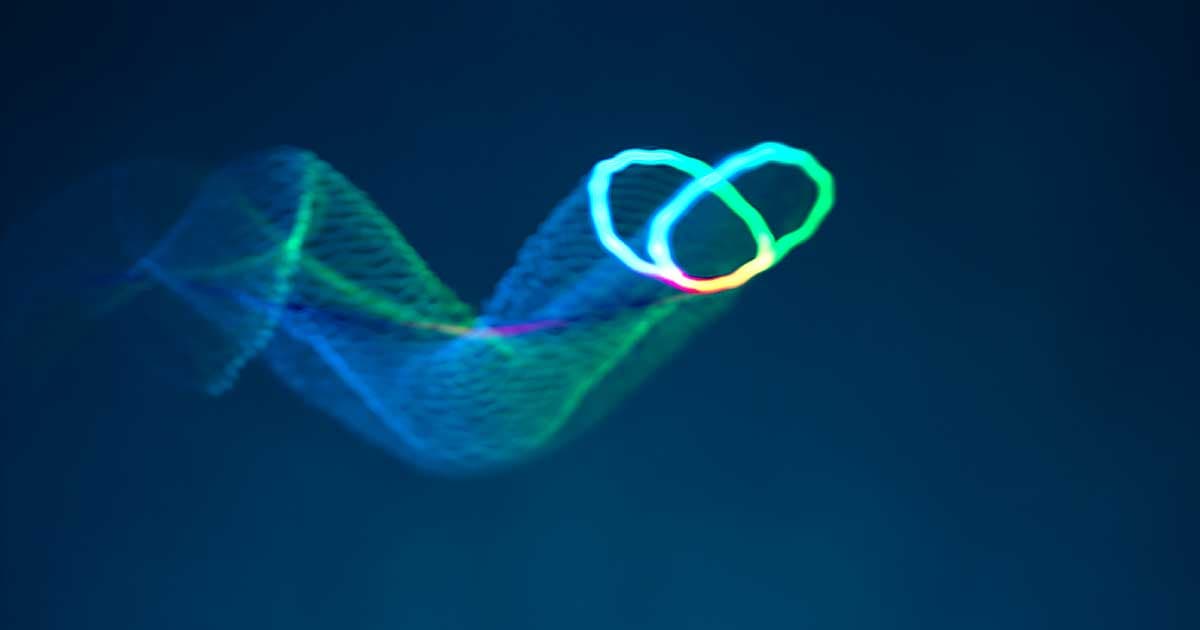 Image by University of Sussex

But now, researchers from the University of Sussex have found a way to create cutting-edge holograms that you can not only see but also hear and even feel — and they pulled it off by drawing on some vintage tech.

The researchers published a paper on their device, which they call the Multimodal Acoustic Trap Display (MATD), in the journal Nature on Wednesday.

The device works by using ultrasound waves to trap and move a two millimeter-wide polystyrene bead around in midair. The bead traces out an object's shape in three dimensions while LEDs shine red, green, and blue light on it.

Because the bead is moving so fast, the human eye sees only the completed shape — a compelling illusion not entirely unlike the way a rapid series of still frames looks like a moving image.

“Our new technology takes inspiration from old TVs which use a single color beam scanning along the screen so quickly that your brain registers it as a single image," researcher Ryuji Hirayama said in a press release. "Our prototype does the same using a colored particle that can move so quickly anywhere in 3D space that the naked eye sees a volumetric image in mid-air.”

The use of ultrasound waves allows the device to produce audible noise as well as a physical sensation.

"Even if not audible to us, ultrasound is still a mechanical wave and it carries energy through the air," researcher Diego Martinez Plasencia said in the press release. "Our prototype directs and focuses this energy, which can then stimulate your ears for audio, or stimulate your skin to feel content."

The researchers envision future versions of the device making use of multiple beads to create even more detailed holograms. And perhaps even more exciting than the prototype itself is the fact that, unlike many cutting-edge technologies, this one might not have too much difficulty making the leap to consumer product.

"The MATD was created using low-cost and commercially available components," Hirayama said in the press release. "We believe there is plenty of room to increase its capacity and potential."

Read This Next
Trippy Study
Scientists Made Mice Hallucinate by Shining Light Into Their Brains
Futurism
What if Our Universe is a Hologram?
Futurism
For the First Time Ever, We Can See Inside Living Cells Without Damaging Them
Futurism
Physicists Successfully Levitate Large Objects With Sound Waves
Futurism
Hologram First: Scientist Create Color Holograms Using Nanoblocks
More on Hard Science
Moved to Tears
Yesterday on the byte
Scientists Say New James Webb Images Are So Powerful That It Was Emotional Just Looking at Them
Good God
Tuesday on the byte
Huge Cloud of Toxic Yellow Gas Kills 13
zombie star
Tuesday on futurism
Scientists Puzzled by Star That Exploded in Supernova But Somehow Survived
READ MORE STORIES ABOUT / Hard Science
Keep up.
Subscribe to our daily newsletter to keep in touch with the subjects shaping our future.
+Social+Newsletter
TopicsAbout UsContact Us
Copyright ©, Camden Media Inc All Rights Reserved. See our User Agreement, Privacy Policy and Data Use Policy. The material on this site may not be reproduced, distributed, transmitted, cached or otherwise used, except with prior written permission of Futurism. Fonts by Typekit and Monotype.