Scientists Create an Oxygen Particle Allows You To Live Without Breathing 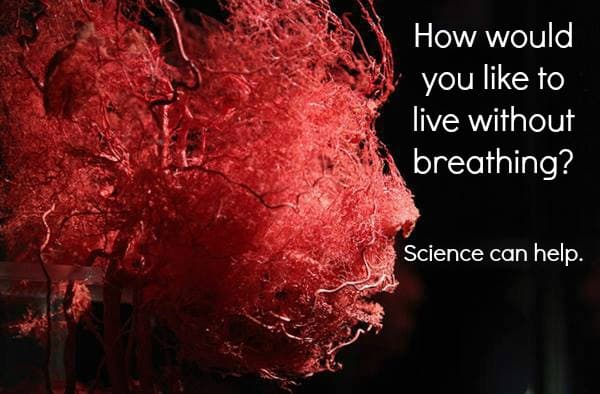 When I was little, I would spend my summer swimming about in the pool pretending to be a mermaid. Unfortunately, my performances were never very successful. I would slide into the pool, glide beneath the water, and gracefully swim to the bottom to have a tea party. Then I would surface, five seconds later, gasping and choking for air. But a recent discovery could forever change the way that we see water, and breathing in general.

If you were unfortunate enough to miss it, in the summer of 2012 scientists were able to keep rabbits with blocked windpipes alive for up to 15 minutes without a single breath. This feat was accomplished after researchers injected oxygen-filled microparticles into the animals' blood.

These microcapsules consist of a single-layer shell of lipids, each surrounding a small bubble of oxygen gas. Through this structure, the oxygen is encapsulated and suspended in a liquid mixture, so can't form larger bubbles (large bubbles of released oxygen would be problematic as they could travel to the heart or brain and kill you). And these particles are tiny. The average size ranges between just 2 and 4 micrometers in diameter, which is amazingly small (the limit on the human eye is often cited as objects 50 micrometers in diameter, about the size of a dust speck. The average width of a human hair is 80 micrometers).

The particles are injected directly into the bloodstream. Here, the particles come into contact with the red blood cells that circulate throughout the body. Once the particles meet the cells, the oxygen transfers within seconds of contact. When the scientists mixed the oxygen particles with blood, their research found that 70% of the oxygen had transferred into the blood in under 4 seconds. “By the time the microparticles get to the lungs, the vast majority of the oxygen has been transferred to the red blood cells.” This distinguishes these microcapsules from the various forms of artificial blood currently in use, which can carry oxygen around the body, but must still receive it from the lungs.

Ultimately, this is of great assistance to anyone who has a blocked airway…or who is pretending to be a mermaid.