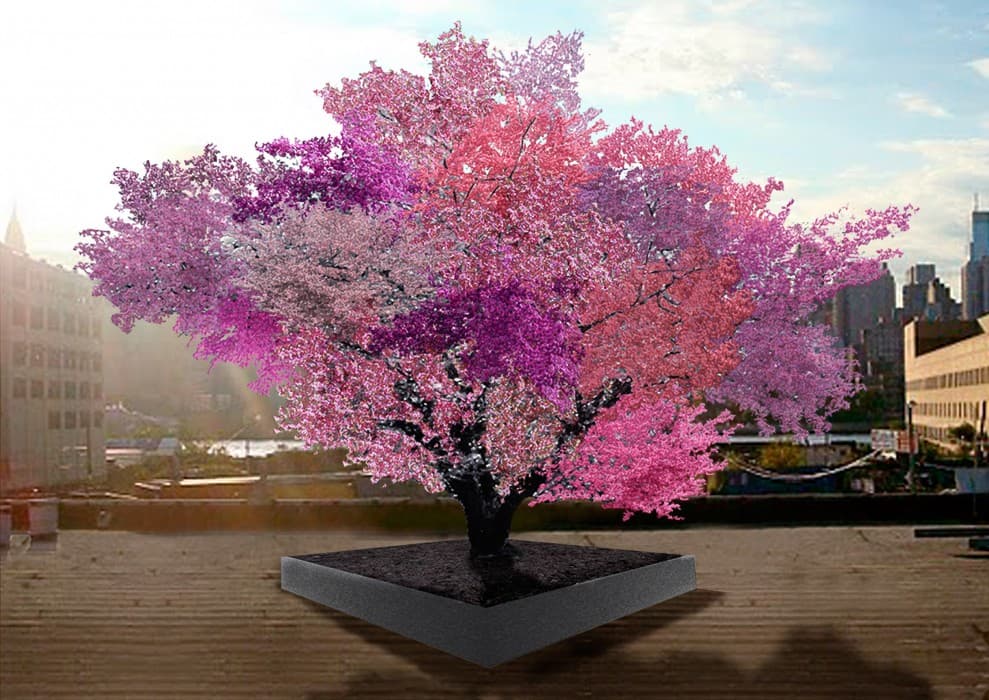 When art and science meet, the results are fruitful.

This was certainly the case for Syracuse University Professor Sam Van Aken. While teaching at SU's College of Visual and Performing Arts, Van Aken was inspired to begin the Tree of 40 Fruit project, which combined sculpture and botany.

The Tree of 40 Fruit began as one single tree. Over time, pieces from 39 different varieties of trees bearing stone fruit were grafted to the pre-existing branches by Van Aken. He approached the project as a sculptor, but kept his knowledge and love of plants in mind throughout the process.

The project began in 2008 when Van Aken heard that an orchard at the New York State Agricultural Experiment Station in Geneva was about to be abandoned. The location housed more than 200 varieties of plums and apricots. Van Aken picked up the lease, and his project began.

"An Entire Orchard in one Tree"

The 40 varieties of fruit ripen between July and October, resulting in a multi-colored subject as the seasons change. One half of the tree might be in full bloom while the other side might look dead, according to Van Aken.

The fruits that grow on the tree are all stone fruits, meaning they have pits. The selection that Van Aken currently works with include plums, peaches, apricots, nectarines, cherries, and almonds.

The result of all this has rightly been called "an entire orchard in one tree." Van Aken was able to assemble his choices for this "orchard" by traveling around New York State. He visited places that specialized in heirloom and antique varieties of stone fruit.

Many other growers didn't understand his goals at first. They questioned why he would want to have to go back again and again to harvest the fruit as it bloomed periodically. An easy harvest wasn't the main goal, though. Instead, Van Aken wanted people to stumble upon the tree, become curious, and start to ask questions and learn.

Chip grafting is the process by which the Tree of 40 Fruit was created. Van Aken begins by removing a sliver of a tree, including a bud, with a knife. He then takes the separated branch and joins it with a pre-existing one on another tree that bears different fruit.

The branches are then bound with clear plastic. This creates a mini greenhouse around the graft, trapping humidity and helping the branch heal. All together, the process takes between 8 and 9 years to grow to peak blossom. Seeing Van Aken work on his trees shows just what a personal and hands-on process this really is.

Van Aken was fascinated with the process of grafting from a young age. To him, it was "Dr. Seuss and Frankenstein and just about everything fantastic." Van Aken's tree could have been plucked right off the pages of a Dr. Seuss story; the renderings of what it will look like in full bloom are vibrant.

14 of these trees are now growing across the United States. As the Tree of 40 Fruit project continues to evolve, Van Aken's goals are also growing. He shares,

"I realized that for various reasons, including industrialization and the creation of enormous monocultures, we are losing diversity in food production and that heirloom, antique, and native varieties that were less commercially viable were disappearing. I saw this as an opportunity to, in some way, preserve these varieties."

In fact, the varieties of fruit that his trees bear come from plants over 1,000 years old from areas including England, Syria, and China. On a grander scale, Van Aken admits that his tree isn't here to end world hunger. What it can do, though, he hopes, is "lead to that type of thinking."

Van Aken also hopes to be able to have more control over how the tree blooms. He's drawn maps and created timelines that all focus on what different times the flowers blossom. By doing this, he will essentially be able to "sculpt" how the tree blossoms and learn more about genetic engineering.

Want to see one of these trees in person? Check out this map to see where they are located.