We're not gonna burst your bubble, but... 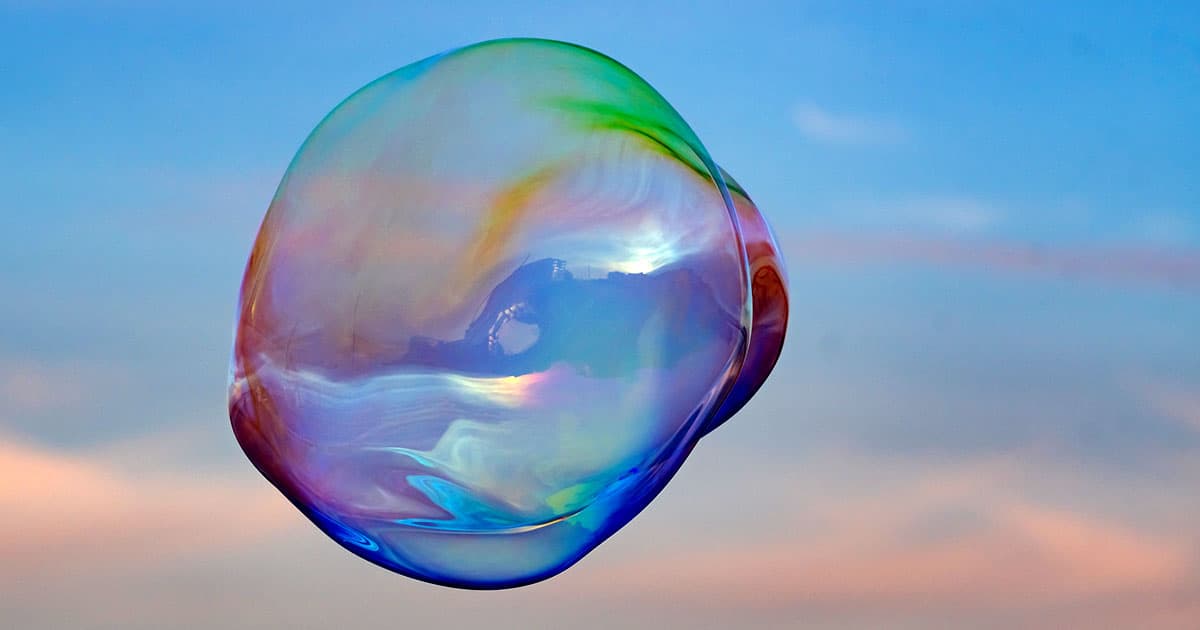 Now, scientists have pulled off the seemingly impossible, leaving our childhood attempts in the dust. In a new study, researchers from the University of Lille in France created bubbles that can live as long as 465 days.

They did, however, take some liberties.

"Soap bubbles are by essence fragile and ephemeral," the study's authors wrote in their paper. "We design bubbles made of a composite liquid film able to neutralize all these effects and keep their integrity for more than one year in a standard atmosphere."

According to APS Physics, the team studied a type of bubble known as a "gas marble." Previous research has shown that plastic beads packed on the bubble’s shell can make it strong enough to be held in a hand or rolled along a surface — but this was the first time scientists studied the bubbles' lifespan.

Soap bubbles lasted (unsurprisingly) the shortest amount of time, normally less than one minute. Water-glycerol marbles lasted the longest, with the oldest survivor making it to 465 days after its "birth."

The team believes the glycerol was be able to absorb enough water from air to compensate for evaporation and also stopped the bubble from draining enough water to rupture.

So what, exactly, is the point of a geriatric bubble?

Some suggest the science could be used in medicine and consumer products.

"I could imagine that the general problem of preventing evaporation could have many practical applications," New York University math professor Leif Ristroph, who wasn't involved in the study but has studied bubbles in the past, told NBC News.

"I’m daydreaming here, but I could imagine it might be useful to 'armor' little droplets in aerosols and sprays to make them last longer in air," he added. "For example, some sort of medicine that’s administered by spraying and breathing in the aerosol."

The researchers behind the study, however, have yet to comment on the possible use cases of their titan bubble.

More on important bubbles: New Theory: The Universe is a Bubble Inflated by Dark Energy

Read This Next
Futurism
Stephen Hawking's Most Dire Predictions for the Future
More on Future Society
Bird Crap
Yesterday on the byte
It Looks Like Elon Musk Is Actually Building a Twitter Payment Platform
Balloon News
Friday on futurism
China Says "Spy Balloon" Soaring Over America Is Completely Innocent
Down in Flames
Wednesday on the byte
Elon Musk Apparently Thinks Twitter Is a "Flaming Dumpster Rolling Down the Street"
READ MORE STORIES ABOUT / Future Society
Keep up.
Subscribe to our daily newsletter to keep in touch with the subjects shaping our future.
+Social+Newsletter
TopicsAbout UsContact Us
Copyright ©, Camden Media Inc All Rights Reserved. See our User Agreement, Privacy Policy and Data Use Policy. The material on this site may not be reproduced, distributed, transmitted, cached or otherwise used, except with prior written permission of Futurism. Articles may contain affiliate links which enable us to share in the revenue of any purchases made.
Fonts by Typekit and Monotype.