Scientists Have Accurately Quantified Dust Around Planets in Search for Life 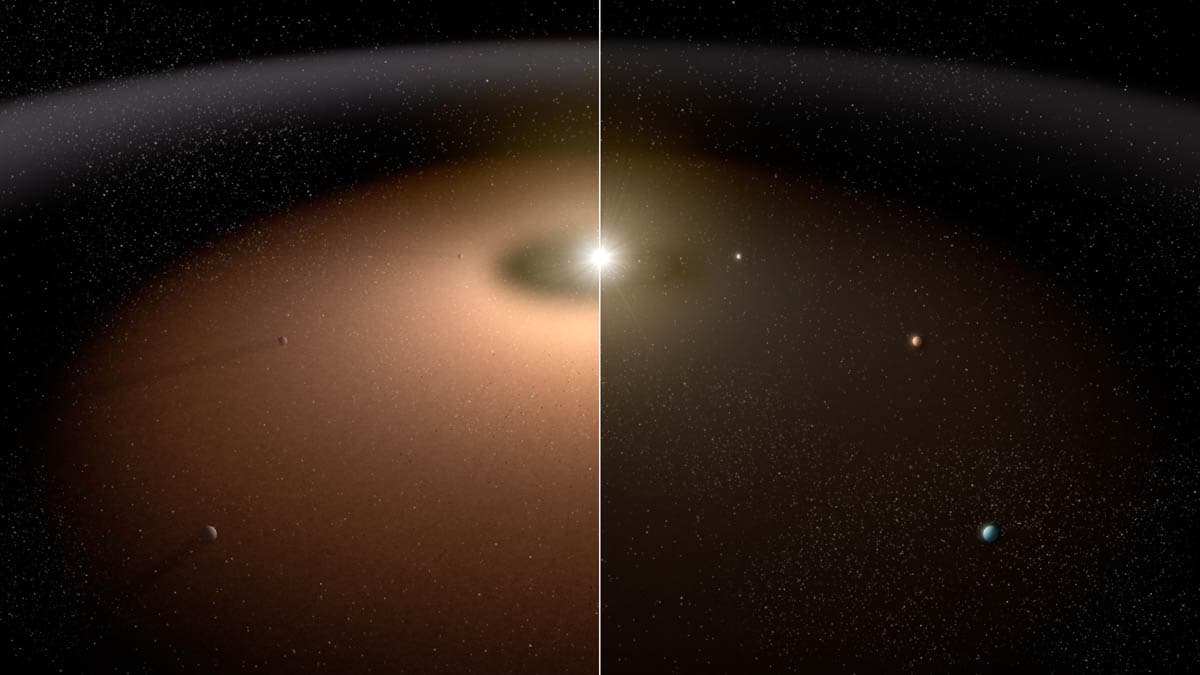 A new study from the Keck Interferometer, a former NASA project that combined the power of the twin W. M. Keck Observatory telescopes atop Mauna Kea, Hawaii, has brought exciting news to planet hunters. After surveying nearly 50 stars from 2008 to 2011, scientists have been able to determine with remarkable precision how much dust is around distant stars — a big step closer into finding planets than might harbor life. The discovery is being published in the Astrophysical Journal online, on December 8th.

“This was really a mathematical tour de force,” said Peter Wizinowich, Interferometer Project Manager for Keck Observatory. “This team did something that we seldom see in terms of using all the available statistical techniques to evaluate the combined data set. They were able to dramatically reduce all the error bars, by a factor of 10, to really understand the amount of dust around these systems.”

How Keck Has Helped:

The Keck Interferometer was built to seek out this dust, and to ultimately help select targets for future NASA Earth-like planet finding missions. Like planets, dust near a star is also hard to see. Interferometry is a high-resolution imaging technique that can be used to block out a star’s light, making the region nearby easier to observe. Light waves from the precise location of a star, collected separately by the twin 10-meter Keck Observatory telescopes, are combined and canceled out in a process called nulling.

“If you don’t turn off the star, you are blinded and can’t see dust or planets,” said co-author Rafael Millan-Gabet of NASA’s exoplanet Science Institute at the California Institute of Technology in Pasadena, California, who led the Keck Interferometer’s science operations system.

“Dust is a double-edged sword when it comes to imaging distant planets,” explained Bertrand Mennesson, lead author of the study who works at NASA’s Jet Propulsion Laboratory, Pasadena, California. “The presence of dust is a signpost for the planet formation process, but too much dust can block our view.” Mennesson has been involved in the Keck Interferometer project since its inception more than 10 years ago, both as a scientist and as the optics lead for one of its instruments.

“Using the two Keck telescopes in concert and interfering their light beams, it is possible to distinguish astronomical objects much closer to each other than when using a single Keck telescope,” Mennesson said. “However, there is an additional difficulty when searching for warm dust in the immediate stellar environment: it generally contributes very little emission compared to the star, and that is when nulling interferometry comes into play.”

In addition to requiring high performance from a large number of hardware and software subsystems, the nuller mode requires them to work smoothly together as a single, integrated system, according to Mark Colavita, the Keck Interferometer System Architect. “The nulling mode of the interferometer uses starlight across a wide range of wavelengths, including visible light for the adaptive optics to correct the telescope wave-fronts, near-infrared light to stabilize the path-lengths, and mid-infrared light for the nulling science measurements.”

Ground and space-based telescopes have already captured images of exoplanets, or planets orbiting stars beyond our Sun. These early images, which show giant planets in cool orbits far from the glow of their stars, represent a huge technological leap. The glare from stars can overwhelm the light of planets, like a firefly buzzing across the Sun. So, researchers have developed complex instruments to block the starlight, allowing information about a planet’s shine to be obtained.

The next challenge is to image smaller planets in the “habitable” zone around stars where possible life-bearing Earth-like planets outside the solar system could reside. Such a lofty goal may take decades, but researchers are already on the path to get there, developing new instrument designs and analyzing the dust kicked up around stars to better understand how to snap crisp planetary portraits. Scientists want to find out: Which stars have the most dust? And how dusty are the habitable zones of Sun-like stars?

In the latest study, nearly 50 mature, Sun-like stars were analyzed with high precision to search for warm, room-temperature dust in their habitable zones. Roughly half of the stars selected for the study had previously shown no signs of cool dust circling in their outer reaches. This outer dust is easier to see than the inner, warm dust due to its greater distance from the star. Of this first group of stars, none were found to host the warm dust, making them good targets for planet imaging, and a good indication that other relatively dust-free stars are out there.

The other stars in the study were already known to have significant amounts of distant cold dust orbiting them. In this group, many of the stars were found to also have the room-temperature dust. This is the first time a link between the cold and warm dust has been established. In other words, if a star is observed to have a cold belt of dust, astronomers can make an educated guess that its warm habitable zone is also riddled with dust, making it a poor target for exo-Earths imaging.

“We want to avoid planets that are buried in dust,” said Mennesson.

Like a busy construction site, the process of building planets is messy. It’s common for young, developing star systems to be covered in dust. Proto-planets collide, scattering dust. But eventually, the chaos settles and the dust clears — except in some older stars. Why are these mature stars still laden with warm dust in their habitable zones?

The newfound link between cold and warm dust belts helps answer this question.

“The outer belt is somehow feeding material into the inner warm belt,” said Geoff Bryden of JPL, a co-author of the study. “This transport of material could be accomplished as dust smoothly flows inward, or there could be larger cometary bodies thrown directly into the inner system.”

Notice: This is a press release from Keck Observatory. See the original news story here.