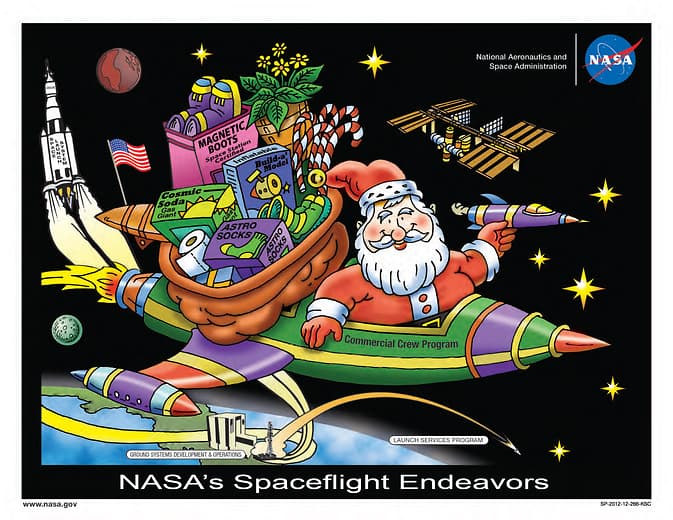 One of the most widely known Christmas-stories involve good ol' St. Nick. After keeping tabs on you for a year, Santa decides whether you've been good or bad, then proceeds to deliver gifts accordingly. To do that, he zips around on his sleigh, pulled by flying reindeer, and visits a staggering number of children in a single evening and is back home in time for Christmas dinner with Mrs. Claus (not to mention, he needs to finish before the kids wake up so he isn't seen).

Obviously, the "classic" version of Santa can't exist, but with an advanced understanding of relativity and physics, Santa could still accomplish all of the same magic on Christmas Eve. There are plenty of places that "debunk" the classic version of Santa (such as the video below), and it is amusing to think about vaporizing reindeer and a disintegrating Santa, but when Science looks to physics, things get more interesting:

To expand on points in the main video:

Santa would need some very advanced technology and a spectacular understanding of avionics to even get started.

Dr. Larry Silverberg, from North Carolina State University, who is a professor of mechanical and aerospace engineering, explained, "Santa is using technologies that we are not yet able to recreate in our own labs. We have a long way to go to catch up with Santa in fields ranging from aerodynamics and thermodynamics to materials science."

Santa's sleigh is the most advanced form of aircraft that has ever been constructed. The sleigh is made from a honeycombed titanium alloy, making it very light and very strong (about 20 times stronger than any material we can make today). In addition to this material, the sleigh can actually morph and change its shape on a moment-to-moment basis to allow it to travel with enormous efficiency.

The sleigh is also equipped with laser sensors that allows Santa to detect upcoming weather conditions, such as thermals, and wind, and state-of-the-art electronics that takes the sleigh along the optimum path. With the morphing truss, laser sensors, and electronic gadgets, Santa has the smoothest ride in the North Pole.

Santa also utilizes 3D printing technology well beyond anything we can create today (actually, it's more like a Star Trek replicator than 3D printing). His nanotaymaker (also called the "Magic Sack") creates toys or coal on the spot so Santa doesn't have to lug all of those gifts around.

Now, relativity makes an appearance. Because Santa is able to stretch spacetime as he desires, he can create "relativity clouds". Essentially, Santa is able to create his own pocket of time that moves slower relative to the rest of us on Earth. In Santa's domain, he can deliver the presents over the course of a few months while only a few hours pass on Earth.

If Santa took the quantum route, he has a whole new world at his disposal. Santa could use quantum superpositions to deliver gifts that only assume a state once they are opened (potentially reducing his carry load). He could use quantum tunneling to "fly through solid objects" dropping off presents along the way. He could also use teleportation technology to literally beam presents all over the globe from the comfort of his workshop.

In the 1980s, the physicist John von Neumann proposed an idea to send a self-replicating probe to a nearby star system. That probe would arrive in the system, make replicas of itself using materials in the system, and those replicas would go to another star system. This process repeats until billions of probes are exploring the galaxy.

Santa could use a similar strategy by sending out a fleet of objects that arrive at a house, replicate toys on the spot (using nanotechnology), and then move on to the next house. Because Santa is environmentally conscientious, these probes would return to the workshop at the end of the Christmas Eve run and Santa would begin to perform maintenance on them for next year.

Either way, skeptics be dammed, Santa can deliver all of his presents to the good children around the world. All he needs is an understanding of science and engineering well beyond anything we have today.