Science is the Word of the Year: 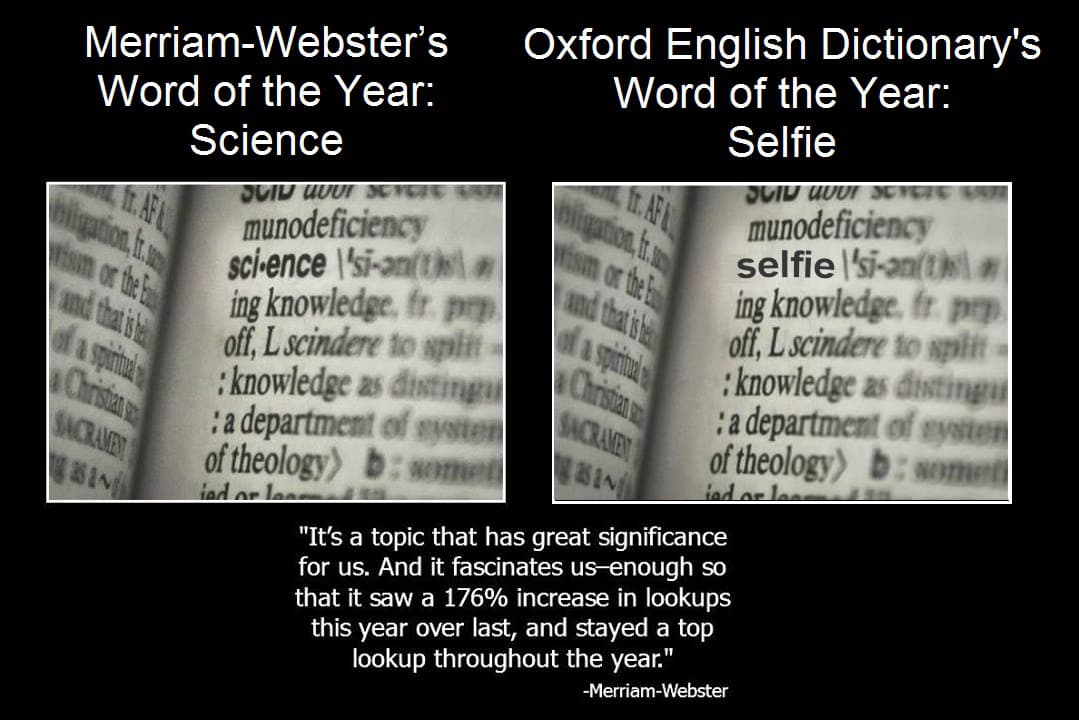 Science is my life.

Reality TV is my life.

Now on the surface, these statements might seem similar. Both tell you a little bit about someone; they offer an insight into a person’s interests. However, the two assertions are wildly different, and this difference in meaning *greatly* impacts our view of the individual that uttered the respective statements.

If you were to hear the first statement, you might expect the person to be rather intellectual and to be fascinated with the wonders of nature and of the universe. They probably have a couple of copies of “The Universe in a Nutshell” in their library. If you were to ask them for an interesting fact, they might tell you that if Canis Majoris (the largest known star) were in the center of our solar system, it would extend far beyond the orbit of Saturn. If you asked them about the most important news, they might discuss the discovery of the Higgs. If you asked them where they’d like to visit, they might say Mars, and they probably have a strong opinion about whether or not Pluto should be a planet. They search the internet for things like “quarks” and “quasars” (see what I did there?).

If you were to hear the second statement, you might expect the person to be rather concerned with popular culture and to be fascinated by the lives of celebrities. They probably have a few copies of “Us Weekly” on their TV stand. If you were to ask them for an interesting fact, they might tell you that Misha Collins is the most interesting person on twitter (he totally is). If you asked them about the most important news, they might tell you that “Catching Fire” broke Thanksgiving records for ticket sales (it did). If you asked them where they’d like to visit, they might say the mall, and they probably have very strong opinions about shoes. They search the internet for things like “celebrity gossip” and “reality tv.”

Now, these may be extreme examples, but they are meant to convey a point – one word (like “science” or “reality tv”) can tell you a lot about a person. Don’t believe me? Check a friend’s internet search history. I guarantee that this will help you *really* get to know them (probably more than you ever wanted to).

Why are we talking about this? Because looking at the headlines, it seems that people are only concerned with gossip and war and smut and violence; however, this isn’t an honest refection of society. In fact, Merriam-Webster’s Dictionary recently announced that the number of look-ups for the word “science” increased by more than 176% from 2012 to 2013. This is important because words don’t just tell us about a person’s interests, they tell us about a culture’s values and interests (think “fascism” for the 1940s and “civil rights” for the 1960s – these ideas resonate with the major concerns of the time, World War II and social upheaval in the United States).

As such, the increase in searches for this term is inspiring. And it comes at a time when we really need science. Of course, every age needs science, but during the last few decades the term has taken a serious beating. There are a number of camps who use and abuse the term. For example, there are the climate-change deniers, those who assert that vaccines cause autism, and people who claim that there is no correlation between American football, concussions, and lasting neurological conditions. Ultimately, at best, people in all of these camps do not understand science or they can’t understand the science behind these issues (at worst, they willfully choose to blatantly ignore science).

So it’s fantastic that people are looking up the meaning of this term. It shows that it is something that people are concerned with -- something that they want to know. And we need to know the meaning of the term, we need to understand it. In some instances, understanding science, and recognizing its accuracy, is literally the difference between life and death (consider: the cigarette companies that, for years, denied the science behind the harm caused by smoking).

As such, this increase in searches for “science” is simply fantastic, and Merriam-Webster’s decision to make the term the “word of the year” is similarly inspiring. Of course, it is a little disheartening that the Oxford English Dictionary decided to make “selfie” their word of the year, but, you know…baby steps.