Science Has Figured Out How to Win at Rock-Paper-Scissors: 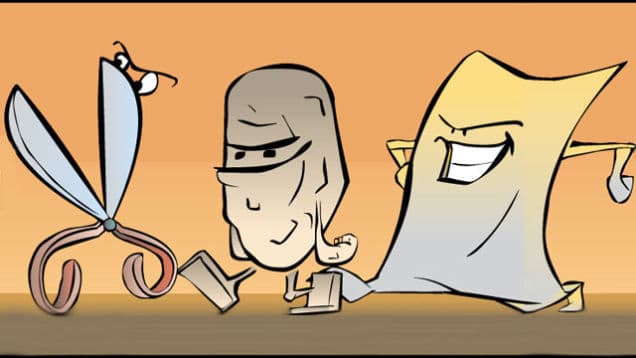 Rock-Paper-Scissors is (quite possibly) one of the most important games in the world. People use it to determine who gets the front seat of the car, who has to take out the trash, and who gets the last popsicle.  Okay, so maybe it isn't really the most important game in the world, but popsicle's are important. And now it seems that scientists have discovered a sure-fire way to win this challenging pastime.

If you are familiar with rock-paper-scissors, then you know that this is supposed to be a game of luck or chance. However, as we all know, games of chance depend on probability, which is (you guessed it) Science! If you are familiar with Stephen Fry's television show Q.I (if you are not, you need to rectify this immediately), then you know that the best opening move is scissors. This is because (for whatever reason) most people assume that the most common gesture is "rock." As a result, most people play "paper" as the first opening move, so the best strategy is to open with "scissors." Of course, now that I have told you that, I have altered the probabilities. But before I digress too much...

Chinese researchers recently took 360 students and broke them into groups of six. Then they had them play 300 rounds of the game in random pairings. Worried about the students not being as invested as you usually are in this game and, thereby, resulting in skewed data? Fear not. In order to ensure that the players never lost incentive (which would be totally justified after playing 300 rounds), the winners of each round were given a small sum of money as a reward.

The scientists found that, "if a player wins over her opponent in one play, her probability of repeating the same action in the next play is considerably higher than her probabilities of shifting actions." Conversely, if a player loses two or more times in a row, then they will not play the same sign. Instead, they play whichever sign would have beaten the one that just allowed the other person to win.

Sound confusing? Here is the handy cheat sheet to help you win:

Last Round: You Won

Last Round: You Lost

Last Round: You Lost (and the other person saw this article)

There you go. I wish you all the best. But, if things don't work out in your favor, you could always just do what the fellows over at Q.I. suggest and get a real rock to throw at your opponent (please don't really do that).