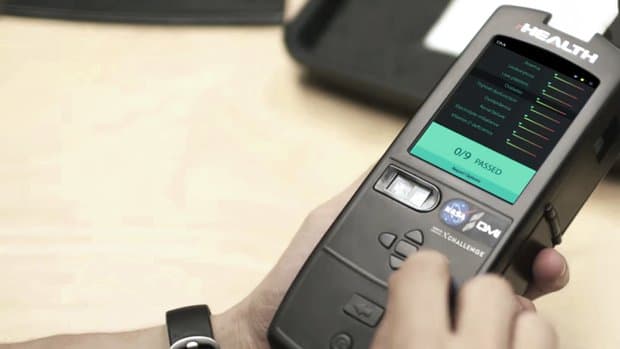 Make way for the tricorder! Anyone who is familiar with Star Trek will know about the medical tricorder. It is an amazing device that doctors can use to (almost instantly) diagnose patients. And now, a team of researchers has developed a device that is remarkably similar.

It's called the "reusable Handheld Electrolyte and Lab Technology for Humans" (rHEALTH). The DNA Medicine Institute (DMI) has been working with NASA’s Glenn Research Center on this device, and recently  produced a working model capable of performing a number of hematology, chemistry, and biomarker tests from a single drop of blood (or other bodily fluid). In short, the rHEALTH sensor is designed to be a universal health sensor with the ability to perform hundreds of different clinical lab tests—all from one drop of blood. What's more, it can complete the test in a matter of minutes, and has a detachable 'wireless vitals sensor module' for monitoring all vital signs.

To get technical, it's a reusable microfluidic device that performs rapid, low-cost cell counts and measurements of electrolytes, proteins, and other biomarkers. While it was developed in order to monitor astronauts' health on the International Space Station (ISS), it obviously has a lot of uses on Earth. This device would make it much easier for doctors to treat patients where they are (which is known as "point-of-care" [POC] diagnostics). This means that an individual could be treated at their bedside, in a doctor’s office, or hospital. They wouldn't have to be transported to a fancy lab with a bunch of equipment.

The device was developed with funding from NASA’s Small Business Innovation Research (SBIR) program. And the researchers recently successfully tested the technology with NASA in a series of parabolic flights over 160 parabolas, from gravity levels from zero to 1.8 g. They are currently on track to develop a version of the technology for routine consumer and clinical use, which could save a number of lives, especially where it is hard to get access to medical treatment.

Another great leap forward for science.

WATCH: The Healthcare Of Tomorrow