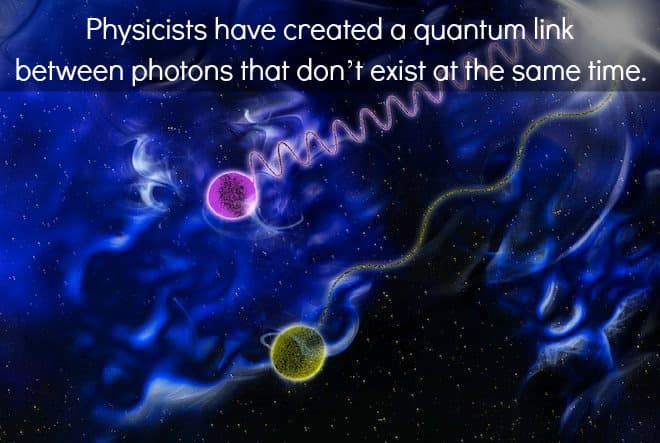 Firstly, a recap on quantum entanglement. One of the most overused quotes in all of science, which came from Einstein, famously refers to quantum entanglement as “spooky action at a distance,” when two photons are entangled, by observing one you can know the state of the other.

Adrian Cho from ScienceNOW explains this spooky phenomenon as such, “Entanglement is a kind of order that lurks within the uncertainty of quantum theory. Suppose you have a quantum particle of light, or photon. It can be polarized so that it wriggles either vertically or horizontally. The quantum realm is also hazed over with unavoidable uncertainty, and thanks to such quantum uncertainty, a photon can also be polarized vertically and horizontally at the same time. If you then measure the photon, however, you will find it either horizontally polarized or vertically polarized, as the two-ways-at-once state randomly “collapses” one way or the other. Entanglement can come in if you have two photons. Each can be put into the uncertain vertical-and-horizontal state. However, the photons can be entangled so that their polarizations are correlated even while they remain undetermined. For example, if you measure the first photon and find it horizontally polarized, you’ll know that the other photon has instantaneously collapsed into the vertical state and vice versa—no matter how far away it is.”

The standard model of particle physics allows for time-separated entanglement, but the question is, how the hell do you entangle two photons that don’t exist at the same time? You basically take entanglement swapping to the next level.

Entanglement swapping is pretty self-explanatory. Physicists entangle two pairs of photons (photons 1 & 2 and photons 3 & 4) by firing a laser at a specially designed crystal a few times. When they are done, photons 1 & 2 are entangled and photons 3 and 4 are entangled, but photons 1 and 4 are not entangled – but they will be after some clever and precise manipulations of photons 2 and 3.

When scientists take a measurement, it “projects” the particle into a definite state. When the experiment starts, photons 2 and 3 are not entangled, but by using this trick of measurements, the research team entangles these two photons together. Photons 2 and 3 are entangled, but this act of entanglement also destroys them. Because of the nature of entanglement, photons 1 and 4 also become entangled and thus entanglement swapping has taken place (as demonstrated by the diagram).

This same principle has been show to work even after the first photon is destroyed. Essentially, scientists entangled photons 1 and 2 and photons 3 and 4, destroy photon 1, make the entanglement measurement on photons 2 and 3, and are left with photon 4 entangled with a now non-existent photon 1. Because the physicists measured the polarization of photon one, they are able to confirm the polarization readings from photon 4 as being entangled with photon 1. By the nature of the experiment, there is never a point in time where both photons 1 and 4 coexist with each other – thus, photon 4 is entangled with a photon outside of its own time.

If that didn’t make any sense, you’re not alone. Anton Zeilinger, from the University of Vienna, says “It’s really neat because it shows more or less that quantum events are outside our everyday notions of space and time.” Which is really just another way of saying “That shit is crazy.”