How Scalable Blockchain Technology Can Bring Us Closer to Earth 2.0 [Sponsored]

A massively scalable blockchain that could fundamentally change how our world operates. 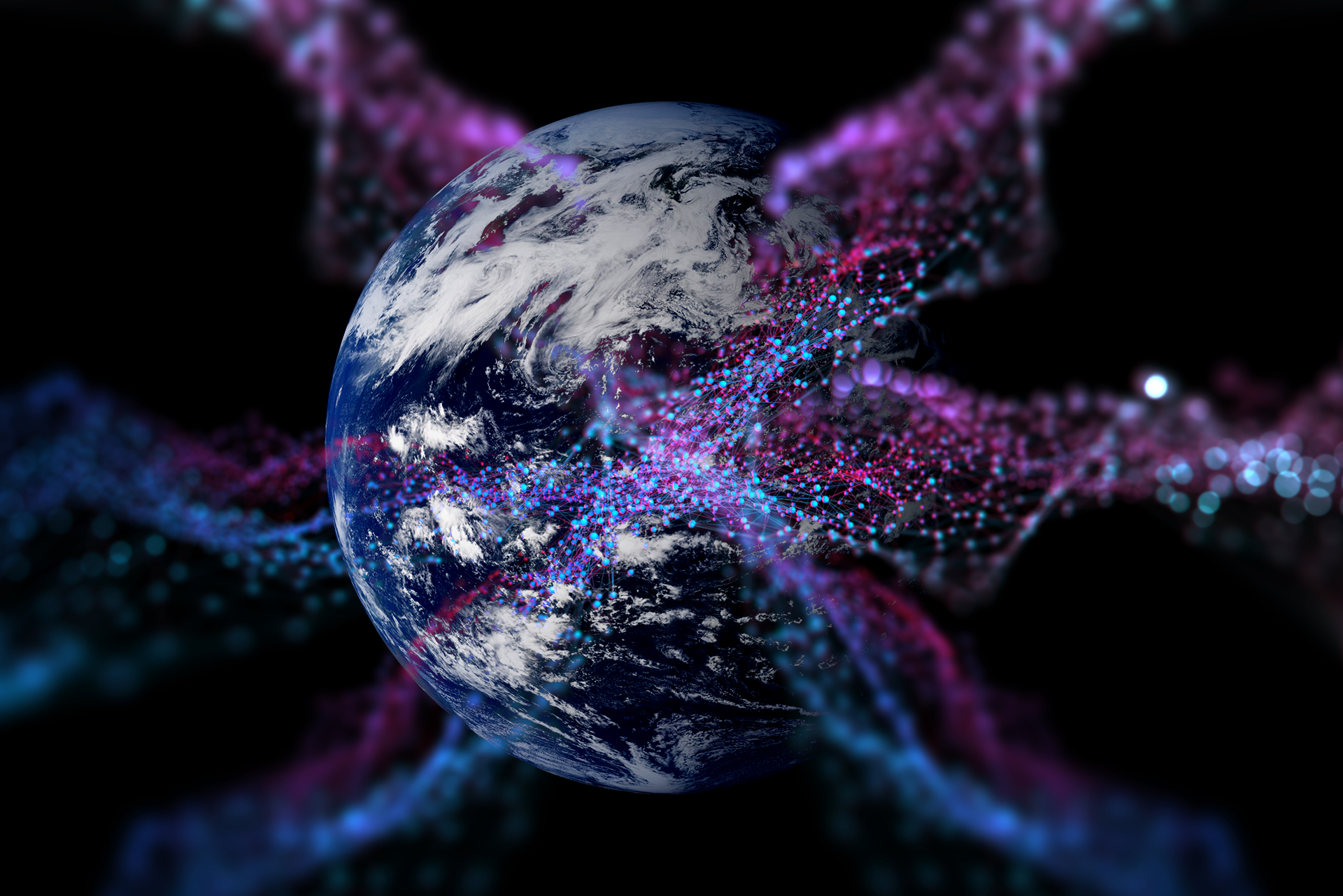 There’s more to blockchain than Bitcoin.  The cryptocurrency may be one of the most infamous names associated with the platform, but the possibilities for blockchain technology extend into industries far beyond finance. Just ask the third generation blockchain, RChain.

Some of the most imaginative uses for blockchain technology sound like the gadgets and networks that exist only in the world of sci-fi. But the speed and scalability made possible by new blockchain providers are making a futuristic universe more than just a fantasy. The technology has the potential to drastically change the way we mobilize, design smarter communities, and help crack the code on creating social impact.

One of the industries that stands to gain the most from blockchain innovation is transportation. We’ve come a long way from the horse and buggy, where autonomous cars powered by a speedy and secure blockchain network are part of a future where fewer people waste time in traffic and more people have access to a safe ride. The cars will improve safety by eliminating human error that leads to road accidents, and autonomous car services could provide new ways for an elderly non-driver to get to a doctor’s appointment, for instance, or for a tiring commute to turn into extra nap time. An autonomous car owner could also rent their car out via a secure blockchain network, turning an autonomous vehicle investment into another revenue stream.

And the technology doesn’t have to be limited to cars. Amazon has dreamt of a future where autonomous drones deliver its packages, but the potential for a blockchain system that can power such a feat can do more than just same-day delivery. An NGO, for example, could use autonomous drones to send supplies to tsunami victims from Australia to Indonesia. As soon as word spread about the disaster, people from around the world could log into a blockchain-run app that would allow them to instantly donate. More importantly, because of the speed and security only possible on a peer-to-peer blockchain network, that organization would be able to instantly access those funds and start their relief efforts, minimizing the transactional costs and red tape most organizations face in such moments.

Imagining and executing the technology possible to run these kinds of civic applications is critical in today’s world, said Greg Meredith, president and co-founder of RChain, a company creating a blockchain platform that allows its developers to dream big.

“We have to coordinate at a level we have never coordinated at as a species,” he told Futurism. “We have to be able to form groups that are as agile as the best dancers, as clear-minded as the best poets and mathematicians and software engineers. The good news is there are all these coordination technologies that we’ve barely scratched the surface of. It’s a place where tech in the sense of bits and bytes and code meets tech in the sense of how we govern ourselves.”

The spirit and ability necessary to govern ourselves has gotten lost in industries plagued by bureaucratic slog, inefficiency, and paperwork. But a blockchain technology seamlessly woven into our stodgy systems could make expensive, time-consuming, or confusing tasks suddenly easy and affordable.

“There are so many applications of blockchain technology, it’s hard to know where to start,” Dr. Mike Stay, the CTO of Pyrofex, the partnering company building out the RChain blockchain, told Futurism. “If you’re buying a house, you’ll be able to check a title claim on the blockchain instead of purchasing title insurance for thousands of dollars. You’ll be able to see the history of repairs on your car instead of paying Carfax or AutoCheck. If a company does all its transactions on blockchain and the auditors run some of the nodes, then the audit process is orders of magnitude cheaper.”

In addition to saving time and money thanks to these applications, citizens could also be rewarded via the blockchain for the efforts towards creating a smart community. For instance, a city looking to control water consumption to avoid drought could incentivize homeowners by offering them cryptocurrency via the blockchain that they could then use at local stores or restaurants. Similar rewards exist today, but companies or governments waste valuable time and money on the labor and transactional costs that it takes to distribute those rewards. With the scale of a blockchain like the one the RChain envisions, those incentives could be distributed immediately at a fraction of the cost.

Developing and maintaining these smarter communities could reinvigorate geographic areas that have been restructured as a result of industries dying or relocating, said Nash Foster, the CEO of Pyrofex.

“I became very interested in Greg’s [Meredith]  ideas about decentralization of the global compute infrastructure,” Foster told Futurism. “I realized that Greg’s vision dovetailed with my own desire to re-energize American communities that had been left behind over the last few decades. I’ve seen many of the communities I love lose access to the productive economy as manufacturing and technology jobs were moved overseas. I have long been interested in finding a way to use the Internet to create more economic opportunities in such areas.”

Pyrofex, helmed by Foster and Stay, is one of the many companies investing in a future with RChain. Stay is a longtime colleague and collaborator with Meredith, and their research efforts formed the mathematical foundations of RChain’s technology. Like many of the collaborators behind RChain, they understood the possibilities of the blockchain platform but felt stifled by the limitations of its architecture. They knew that the massive centralized data centers that brought us search engines and social media lack the speed and efficiency to power autonomous vehicles and smarter communities. But they also knew that many of the current blockchain technologies were never designed with scale in mind. Original blockchain architecture relies on a single chain that works for small endeavors, but isn’t equipped to handle massive growth without taking up the energy supplies of entire countries.

RChain approached blockchain with that massive growth in mind, setting out to create a network that would have the scale of Facebook and the speed of Visa credit card transactions. Their decentralized system is powered by what they call the Rho Virtual Machine, or RhoVM.

Rather than having to only build up, bit by bit, the RhoVM allows for a network of parallel blockchains. That means that as the platform continues to grow, it can manage the load by building out linearly on top of a solid and secure foundation. Any kid who has played with building blocks can understand the technique. A tower made of a single stack of blocks will crumble in under a minute. But a fortress built short and wide with a strong base is one that will act as a foundation for several more hours of block building.

It’s only a foundation like RChain’s that can support the growth necessary for futuristic blockchain applications like autonomous medicine-delivering drones or smarter communities free of bureaucratic inefficiency. While RChain achieves scaling and safety through fundamental mathematics and computer science, other blockchain infrastructures might attempt to engineer around a problem to manage such a feat in a lab, but to operate on a global scale, these burgeoning technologies need the speed, efficiency, and scale of RChain’s RhoVM. With the help of a growing network of partners, developers, and bright minds that won’t settle in the past, they’re welcoming a future full of sci-fi dreams made into reality.

The preceding communication has been paid for by Reflective Venture Partners. This communication is for informational purposes only and does not constitute an offer or solicitation to sell shares or securities in RChain or any related or associated company. None of the information presented herein is intended to form the basis for any investment decision, and no specific recommendations are intended. This communication does not constitute investment advice or solicitation for investment. Futurism expressly disclaims any and all responsibility for any direct or consequential loss or damage of any kind whatsoever arising directly or indirectly from: (i) reliance on any information contained herein, (ii) any error, omission or inaccuracy in any such information or (iii) any action resulting from such information.

Each recipient of this communication expressly acknowledges that RChain’s tokens are being sold solely for the purpose of providing purchasers of such tokens with access to the services associated with the tokens, and that such persons are not being offered, and will not be purchasing, any tokens for any other purposes, including, but not limited to, any investment, speculative or other financial purpose. Each recipient further acknowledges that they are aware of the commercial risks associated with RChain’s tokens and the network associated with its tokens.

Read This Next
Dubious Donations
Politicians Refuse to Say Whether They'll Give Back Donations From Sam Bankman-Fried
Sad!
Melania Trump Accused of Secretly Buying Her Own NFT to Avoid Disgrace
Bye Bye Baby
Lawyer for Crypto Laundering Rapper Says She Won't Flee Because of Her Frozen Embryos
Greenwashing
World Wildlife Foundation Cancels NFT Project After Critics Point Out That It Was Actually a Huge Polluter
Bitcoin & Clyde
Feds Arrest Crypto CEO for Bitcoin Laundering, But Her Real Crime Was Against Rap Music
More on Future Society
Balloon News
2:56 PM on futurism
China Says "Spy Balloon" Soaring Over America Is Completely Innocent
Down in Flames
Wednesday on the byte
Elon Musk Apparently Thinks Twitter Is a "Flaming Dumpster Rolling Down the Street"
All Tomorrow's Pa...
Wednesday on the byte
Party Startup Says It Has Zero Plans to Make Any Money With Investors' Funds
READ MORE STORIES ABOUT / Future Society
Keep up.
Subscribe to our daily newsletter to keep in touch with the subjects shaping our future.
+Social+Newsletter
TopicsAbout UsContact Us
Copyright ©, Camden Media Inc All Rights Reserved. See our User Agreement, Privacy Policy and Data Use Policy. The material on this site may not be reproduced, distributed, transmitted, cached or otherwise used, except with prior written permission of Futurism. Articles may contain affiliate links which enable us to share in the revenue of any purchases made.
Fonts by Typekit and Monotype.