Watch the spacecraft "achieve a perfect somersault" over a tiny asteroid. 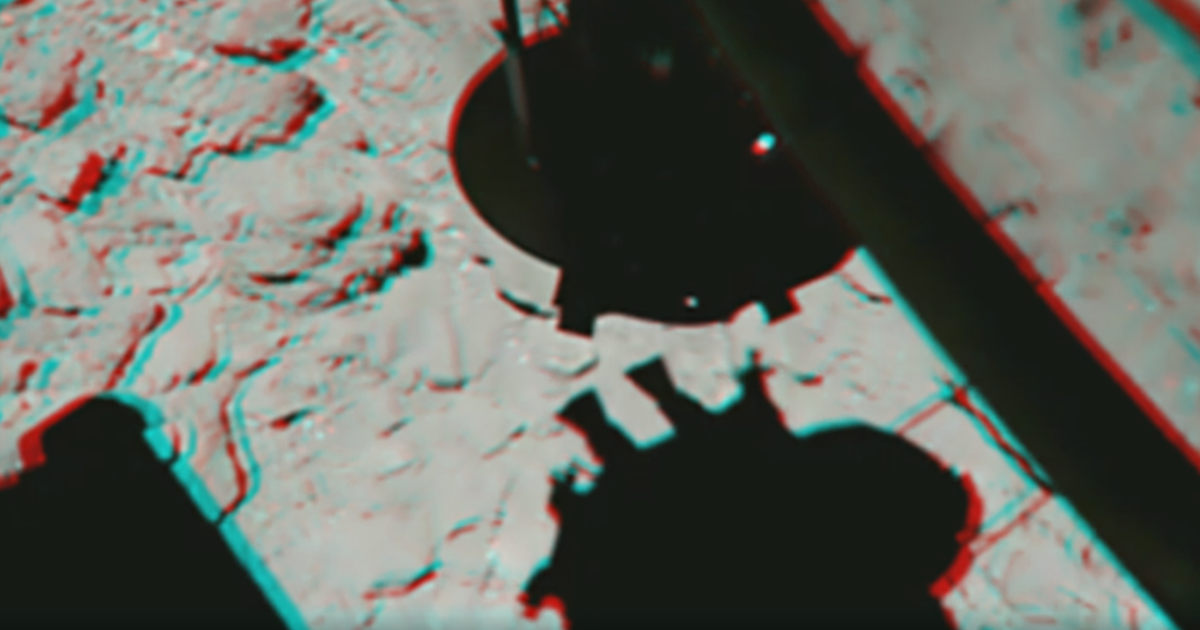 On Feb. 22, JAXA's Hayabusa2 spacecraft successfully landed on a kilometer-wide asteroid called Ryugu and shot its surface with a metal bullet. Now the footage of the groundbreaking maneuver has finally arrived back on Earth.

The new footage shows the mission to collect and return small rock samples to explore the nature of the Solar System's inner planets and find clues about the origin of life on Earth — and it's an extraordinary testament to the scientific power of automated space travel.

In a video released by Japanese space agency JAXA today on Twitter, the spacecraft can be seen approaching the asteroid. The moment it touches the asteroid's surface, a plume of small debris surrounds the landing gear — presumably the moment a metal bullet was fired at 300 m/s (671 mph).

"Hayabusa2 achieved a perfect somersault over Ryugu — like a 'lunar somersault' — and then returned to the home position in a dignified manner," reads an official Feb. 27 statement.

JAXA's team of engineers had to adjust the spacecraft's course during and after its somersault, since the place it decided to land on wasn't even.

"In order to return to the home position, it was necessary to exert a force in a direction difficult to achieve due to the orientation of the spacecraft thrusters," the statement reads.

Hayabusa2 first rendezvoused with the asteroid in June. Since then, it has released two “hopping” rovers in September of last year for its first visit and a third rover on a second mission in October.

The spacecraft is planning to collect more samples during two future visits.

The Hayabusa2 team at JAXA wants to know how their spacecraft did.

More on the Hayabusa2 mission: Japan Just Landed a Robot Spacecraft on an Asteroid

Read This Next
Rock Is Dead
NASA Spacecraft Grabbed Too Many Asteroid Chunks and Now They're Drifting Into Space
Asteroid Armageddon
The "Space Nation" Warns That an Asteroid Could Wipe out Humanity
Particle Plume
NASA Shocked by "Plumes Erupting From an Asteroid’s Surface"
Hayabusa2
Japan Just Landed a Robot Spacecraft on an Asteroid
Shooting Asteroids
A Japanese Spacecraft Is About to Shoot an Asteroid With a Bullet
More on Off World
I Don't Like This...
Yesterday on the byte
Fun Website Lets You Simulate an Asteroid Impact in Your Hometown
TTFN
Monday on the byte
Skkrt! NASA's Orion Heads Back to Earth, Leaves Moon in the Dust
Icy Comet Eruption
Monday on the byte
Astronomers Spot Volcano Erupting on a Distant Comet
READ MORE STORIES ABOUT / Off World
Keep up.
Subscribe to our daily newsletter to keep in touch with the subjects shaping our future.
+Social+Newsletter
TopicsAbout UsContact Us
Copyright ©, Camden Media Inc All Rights Reserved. See our User Agreement, Privacy Policy and Data Use Policy. The material on this site may not be reproduced, distributed, transmitted, cached or otherwise used, except with prior written permission of Futurism. Articles may contain affiliate links which enable us to share in the revenue of any purchases made.
Fonts by Typekit and Monotype.