Japan Just Landed a Robot Spacecraft on an Asteroid

The spacecraft successfully fired a bullet at the surface of an asteroid. 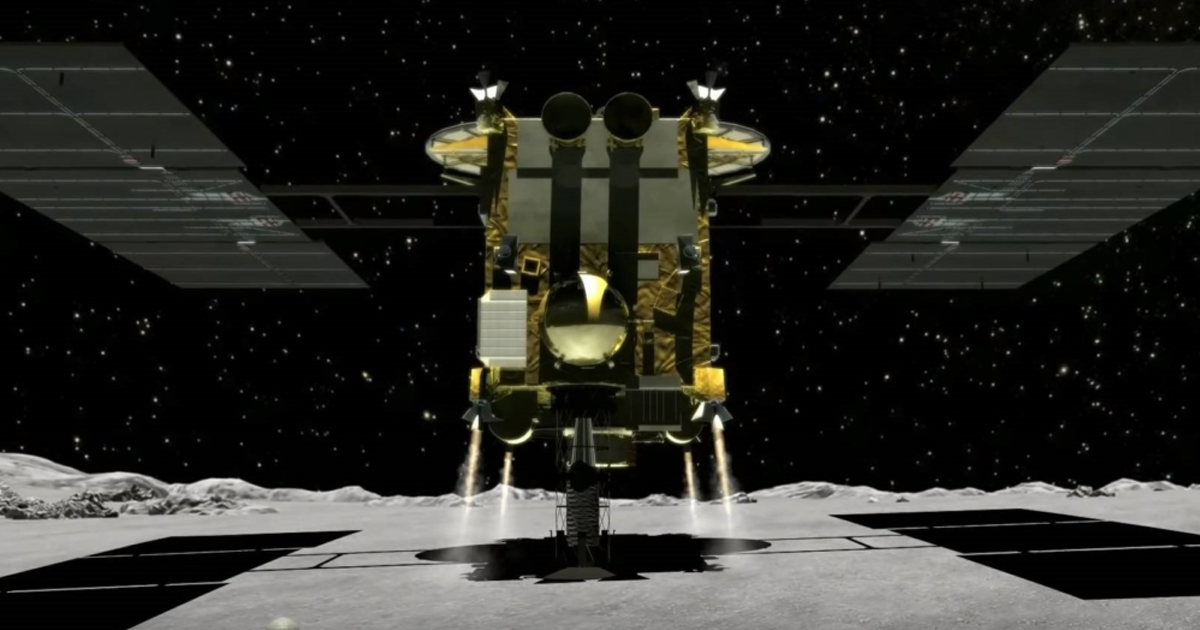 Japanese spacecraft Hayabusa2 touched down on the surface of Ryugu Friday — a kilometer-wide asteroid with an orbit that periodically brings it close to Earth as it circles the Sun.

And the probe has already completed the first big step of its primary mission: collect tiny rock samples to send home.

Congratulations on your successful touchdown, @haya2_jaxa! We're excitedly waiting for the telemetry and confirmation of sample collection. pic.twitter.com/iBeQHZxPsc

Upon landing, Hayabusa2 fired a metal bullet into the rock and scooped up some samples using its on-board "sampling horn."

[TD1-L08E1] This is the navigation image received on 2/22 at around 5:30 JST. You can begin to see the shadow of the spacecraft. pic.twitter.com/P480UlwPqs

There was a delay of several hours while the Earth-bound team waited for the spacecraft to resume communications after firing the bullet — the connection broke off when the spacecraft made contact.

It's not the first time the spacecraft has landed on Ryugu. It released two "hopping" rovers in September of last year for its first visit and a third rover on a second mission in October.

Hayabusa2 will swoop in two more times to collect additional samples later this year. The second approach will hopefully roll out the same way today's mission did. On its third sample collection mission, the spacecraft will fire a copper projectile into Ryugu to collect samples from the subsurface.

The collected samples will then return to Earth in a special return capsule at the end of next year.

More on Hayabusa2: A Japanese Spacecraft Is About to Shoot an Asteroid With a Bullet

Read This Next
Shoo
Scientists Warn Giant Asteroid Is Actually Swarm, Nearly Impossible to Destroy
Rock Is Dead
NASA Spacecraft Grabbed Too Many Asteroid Chunks and Now They're Drifting Into Space
Asteroid Armageddon
The "Space Nation" Warns That an Asteroid Could Wipe out Humanity
Particle Plume
NASA Shocked by "Plumes Erupting From an Asteroid’s Surface"
Futurism
New Video Shows Japanese Probe Shooting Asteroid With Bullet
More on Off World
Drama Bomb
Wednesday on the byte
European Space Agency Halts Plans to Send Astronauts to Chinese Space Station
Futurism
Wednesday on the byte
Asteroid Mining Startup About to Launch First Mission
Carry On, Wayward...
Wednesday on the byte
NASA Says Lucy Spacecraft Will Forge Ahead With Busted Solar Array
READ MORE STORIES ABOUT / Off World
Keep up.
Subscribe to our daily newsletter to keep in touch with the subjects shaping our future.
+Social+Newsletter
TopicsAbout UsContact Us
Copyright ©, Camden Media Inc All Rights Reserved. See our User Agreement, Privacy Policy and Data Use Policy. The material on this site may not be reproduced, distributed, transmitted, cached or otherwise used, except with prior written permission of Futurism. Articles may contain affiliate links which enable us to share in the revenue of any purchases made.
Fonts by Typekit and Monotype.