OSIRIS-REx bit off more than it can chew. 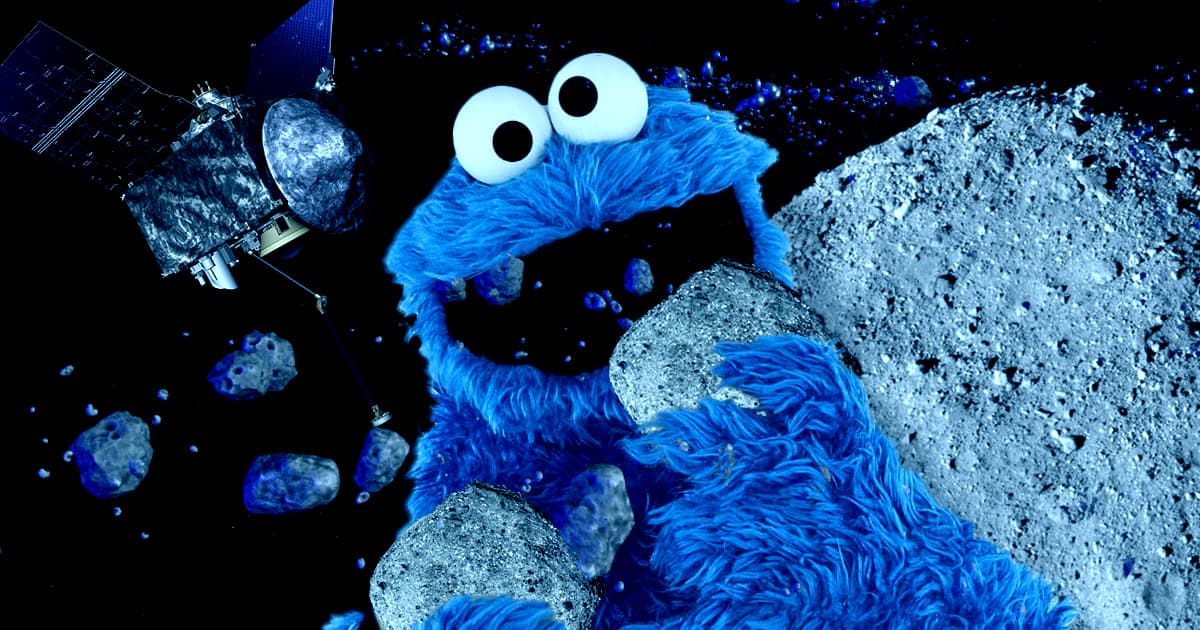 NASA may have gotten a little overzealous with its OSIRIS-REx spacecraft, allowing it to bite off more asteroid than it can chew.

Last week, in a triumphant first for the space agency, its spacecraft touched down on Bennu, a small near-Earth asteroid some 500 meters across, to scoop up a sample to bring back home.

At first, everything seemed to have gone according to plan. But only three days later, scientists made an unfortunate discovery: OSIRIS-REx scooped up so many space rocks that its "mouth" was jammed open, with bits of asteroid rubble tumbling out into space.

"The loss of mass is of concern to me, so I’m strongly encouraging the team to stow this precious sample as quickly as possible," Dante Lauretta, OSIRIS-REx principal investigator, said in a statement.

According to NASA, the spacecraft scooped up at least 60 grams of surface material — but it likely took up far more than that. After reviewing the images, the OSIRIS-REx team found that particles were escaping through tiny gaps around the collector's lid

The team, however, isn't too discouraged by the news.

"And although we may have to move more quickly to stow the sample, it’s not a bad problem to have," he said. "We are so excited to see what appears to be an abundant sample that will inspire science for decades beyond this historic moment."

In response, the team decided to postpone mass measurement activities and a braking burn that was scheduled for October 23.

"We’re almost a victim of our own success here," Lauretta said during a last-minute news conference on Friday, as quoted by The Washington Post.

"Time is of the essence," Zurbuchen added.

OSIRIS-REx will — regardless of the amount of material stored in its belly — make its long return journey to Earth and land, if everything else goes according to plan, some time in 2023.

"I think we’re going to have to wait until we get home to know precisely how much we have," Lauretta said during the conference, per the Post. "As you can imagine, that’s hard... But the good news is we see a lot of material."

More on the mission: Watch NASA’s Spacecraft Touch Down on a Tiny Asteroid

Read This Next
Shoo
Scientists Warn Giant Asteroid Is Actually Swarm, Nearly Impossible to Destroy
A Sip of Opal
NASA Discovers Precious Gemstones on Mars
Moon Wrestling
The Head of NASA Is Scared Chinese Astronauts Will Seize Portions of the Moon
Future Fiction
Scientists Propose Building City Inside Giant Bag Around Entire Asteroid
Shot Well
Head of NASA Relieved to Hear Elon Musk Isn't REALLY Running SpaceX
More on Off World
Exoplanet Dance
Yesterday on the byte
Scientist Releases Amazing Video of Exoplanets Orbiting Distant Star
Space Junk News
Yesterday on the byte
Two Large Chunks of Space Debris Just Almost Collided in an Epic Disaster
Mars Drop
Yesterday on the byte
NASA's Mars Rover Perseverance Just Dropped Off Its Last Sample
READ MORE STORIES ABOUT / Off World
Keep up.
Subscribe to our daily newsletter to keep in touch with the subjects shaping our future.
+Social+Newsletter
TopicsAbout UsContact Us
Copyright ©, Camden Media Inc All Rights Reserved. See our User Agreement, Privacy Policy and Data Use Policy. The material on this site may not be reproduced, distributed, transmitted, cached or otherwise used, except with prior written permission of Futurism. Articles may contain affiliate links which enable us to share in the revenue of any purchases made.
Fonts by Typekit and Monotype.