Russia Blows Up Satellite, Forcing Its Own Cosmonauts to Cower in Fear

"Their actions are reckless and dangerous." 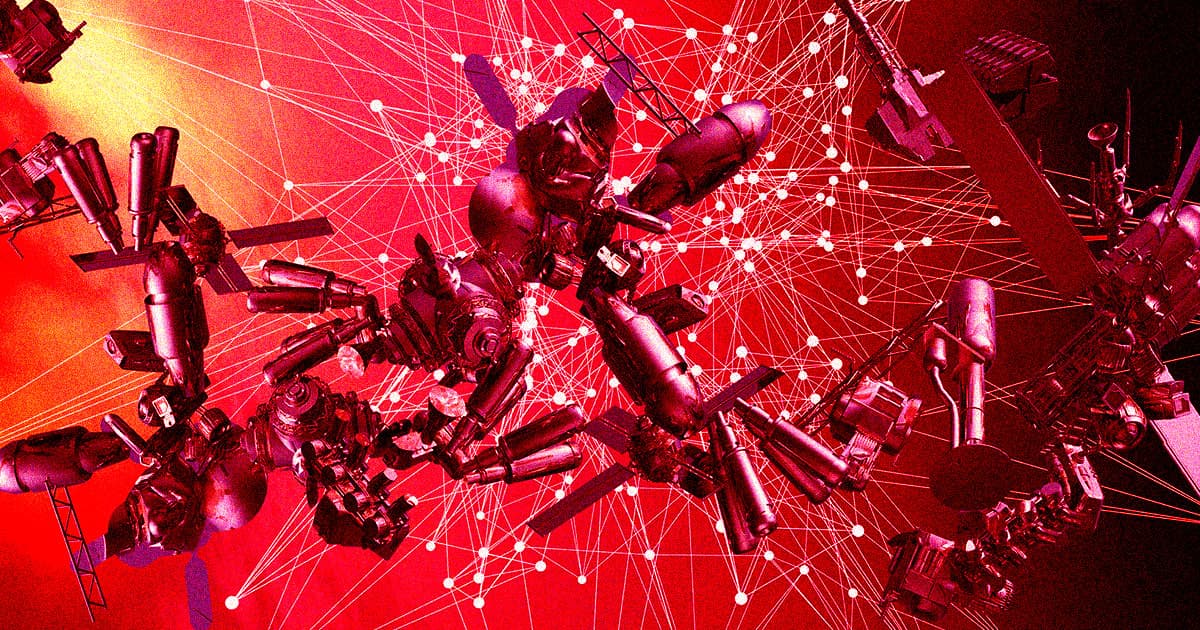 Yesterday, astronauts aboard the International Space Station (ISS) were forced to suit up and shelter in docked vehicles when the orbital outpost passed through a debris cloud. While the origins of the debris were initially shrouded in speculation, we now know the answer: Russia blew up a satellite to test a new weapon.

The US Space Command announced in a statement that Moscow was behind the debris field after it tested a direct-ascent anti-satellite (DA-ASAT) missile on Monday. The missile struck Russian satellite COSMOS 1408 and created more than 1,500 pieces of traceable orbital debris — which, in a callous twist, forced Russia's own cosmonauts stationed on the ISS to hide out in a docked Soyuz module in case of catastrophe.

"With its long and storied history in human spaceflight, it is unthinkable that Russia would endanger not only the American and international partner astronauts on the ISS, but also their own cosmonauts," said NASA head Bill Nelson. "Their actions are reckless and dangerous, threatening as well the Chinese space station and the taikonauts on board."

The revelation came after yet another dramatic moment for the crew aboard the ISS, who had to dodge another debris cloud caused by anti-satellite weapons just last week.

NASA in the same press release that quoted Nelson that the "crew was awakened and directed to close the hatches to radial modules on the station." The astronauts then had to shelter in docked spacecraft twice as the orbital outpost passed through and near the debris cloud.

Russia fired back, saying that that huge cloud of whirling debris doesn't pose a danger to anyone in orbit.

"The US knows for certain that the resulting fragments, in terms of test time and orbital parameters, did not and will not pose a threat to orbital stations, spacecraft and space activities," Russia's defense ministry said.

US authorities, needless to say, disagreed.

"Russia has demonstrated a deliberate disregard for the security, safety, stability, and long-term sustainability of the space domain for all nations," said US Space Command general James Dickinson. "The debris created by Russia's DA-ASAT will continue to pose a threat to activities in outer space for years to come, putting satellites and space missions at risk, as well as forcing more collision avoidance maneuvers. Space activities underpin our way of life and this kind of behavior is simply irresponsible."

So yeah, much like Sandra Bullock dodging Russian ASAT debris in "Gravity," the ISS's real-life crew had to scramble to survive a Russian debris field as well. While this story ended much better for the ISS, the reality is that anti-satellite missile tests pose a significant danger to astronauts — and it’s a danger that’s ramping up quickly.

Read This Next
Duck and Roll
Russia Forced to Dodge Space Debris From When It Blew Up Satellite
Ice Ice Baby
Check Out This Moon-Shaped Ice Crystal on the Space Station's Window
Scheming Dmitry
Former NASA Official Says Russian Space Head Is Trapped, Trying to Escape
Shuttling Russians
NASA Deciding Whether Russian Cosmonaut Is Allowed on SpaceX Launch
Moon Dudes
Putin Says Russia Is Landing on the Moon This Year
More on Off World
Mars Rock Blues
6:07 PM on futurism
Mars Rock Samples Probably Won't Infect Earth With Deadly Martian Plague, Scientist Says
CAPSTONE's Back
4:06 PM on the byte
Celebration Erupts as NASA Restores Comms With Lost Spacecraft
Satellite Blues
3:31 PM on the byte
NASA Still Has No Contact With Spacecraft En Route to the Moon
READ MORE STORIES ABOUT / Off World
Keep up.
Subscribe to our daily newsletter to keep in touch with the subjects shaping our future.
+Social+Newsletter
TopicsAbout UsContact Us
Copyright ©, Camden Media Inc All Rights Reserved. See our User Agreement, Privacy Policy and Data Use Policy. The material on this site may not be reproduced, distributed, transmitted, cached or otherwise used, except with prior written permission of Futurism. Fonts by Typekit and Monotype.