Why Are The Rotational Axes of All These Quasars Aligned? 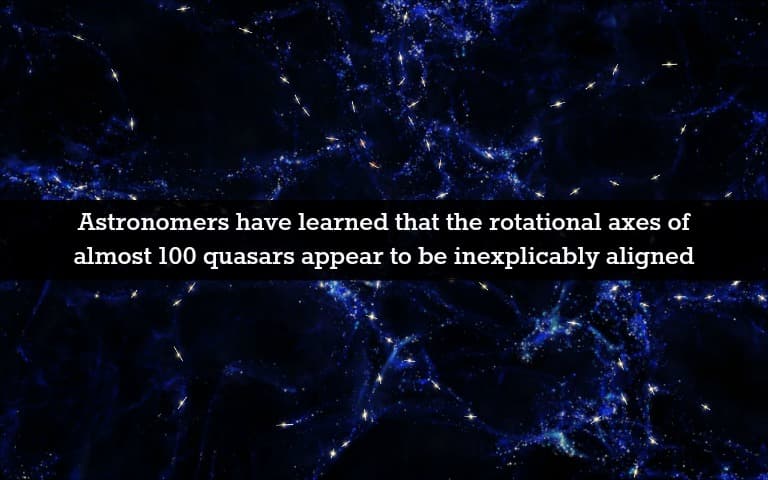 If any object is more fascinating and terrifying than a black hole, it's a quasar. It's an object that happens to be similar to a black hole, but younger, hotter, brighter, and far more rare. New research coming from the European Southern Observatory (ESO) only heightens the mystery surrounding the enigmatic sibling of the contemporary heavyweight black hole.

Both objects contain a singularity and an event horizon, the difference is, quasars also have large, spinning disks of material surrounding them, kind of like a black hole's accretion disk...but on steroids. They burn so bright and spectacularly hot that one of their hallmark characteristics is that they can outshine their entire host galaxies with ease.

They are so active, many of them spit out very long jets of radiation, leading away from their poles. However, since it takes so much food (gas and dust) to keep the power on, quasars are usually only found in the distant reaches of the universe. And since looking back in space also means looking back in time, astronomers use these objects to garner information about the early universe. In short, think of them as fossils of a time far gone.

The new discovery, which was carried out using the ESO's "Very Large Telescope," has shown that there appears to be a mysterious, but distinct, alignment of quasars, coinciding with large-scale structures in the universe. Specifically, the team — led by Damien Hutsemékers from the University of Liège in Belgium — learned that the rotational axes of a large number of supermassive black holes (which are believed to be at the heart of all quasars) all lie parallel to each other, despite the vast distances involved. What's more is that "the rotation axes of these quasars tend to be aligned with the vast structures in the cosmic web in which they reside."

The cosmic web is a large-scale structure to beat all large-scale structures; spanning several billions of light years across, this strange feature is comprised of billions upon billions of large galaxy clusters. Much research has been carried out as an effort to better understand the formation of this gargantuan fixture, but more questions surface than answers. Namely, by studying this structure, we've learned about another more tantalizing mystery, the Large Quasar Group (LQG).

When it was discovered in 2013, it not only broke the brains of many physicists, it also challenged Einstein's 'Cosmological Principle," which tells us that, no matter where we look in space, we should see virtually the same thing (the same amount of matter throughout). However, this grouping of 73 quasars, which span 4 billion light-years at the widest point, stand out.

The quasars found in the LQG, along with several others (coming to a total of 93), were used in this new research. Based on their age and appearance, it seems they formed when the universe was just a third of its current age.

Returning to the new development, shortly after they began their study, the researchers (including Hutsemékers) knew they had stumbled into something spectacular.

“The first odd thing we noticed was that some of the quasars’ rotation axes were aligned with each other — despite the fact that these quasars are separated by billions of light-years,” said Hutsemékers.

The team then went further and looked to see if the rotation axes were linked, not just to each other, but also to the structure of the universe on a macroscale.

When astronomers look at the distribution of galaxies on scales of billions of light-years they find that they are not evenly distributed. They form a cosmic web of filaments and clumps around huge voids where galaxies are scarce. This intriguing and beautiful arrangement of material is known as large-scale structure.

The new VLT results indicate that the rotation axes of the quasars tend to be parallel to the large-scale structures in which they find themselves. So, if the quasars are in a long filament then the spins of the central black holes will point along the filament.

Of course, many astronomers assert that things of this nature could easily be chalked up to coincidence or a fluke, but these researchers contest that by noting that the probability of the alignment being random is less than 1 percent.

“A correlation between the orientation of quasars and the structure they belong to is an important prediction of numerical models of evolution of our universe. Our data provide the first observational confirmation of this effect, on scales much larger that what had been observed to date for normal galaxies,” adds Dominique Sluse of the Argelander-Institut für Astronomie in Bonn, Germany, and University of Liège.

The team could not see the rotation axes or the jets of the quasars directly. Instead they measured the polarization of the light from each quasar and, for 19 of them, found a significantly polarized signal. The direction of this polarization, combined with other information, could be used to deduce the angle of the accretion disc and hence the direction of the spin axis of the quasar.

Despite this, the alignment of the rotational axes pf these sample quasars might make us challenge certain predictions and models, which, needless to say, is a mixed blessing.

You can read the full press release here.