The Riddle of the Antikythera Mechanism Deepens 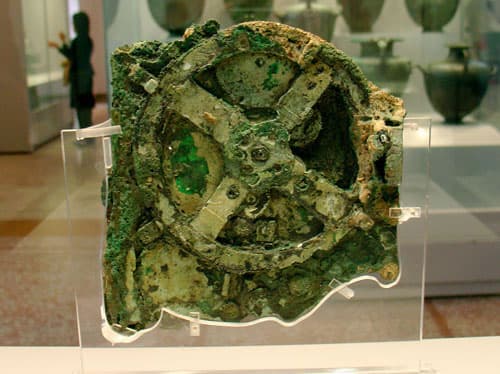 When we think about technology, we tend to think about modern society. Indeed, we generally believe that technological devices were not known to ancient peoples. However, as it turns out, this assumption is a little off-base. Case in point: The Antikythera Mechanism.

This is a truly ancient device. Based on its design, scientists believe that its construction may have been influenced by the scientific teachings of Archimedes (who was an Ancient Greek mathematician, physicist, astronomer, engineer, inventor, and well, pretty much everything). But part of the problem with figuring out when the device comes from is knowing what it was for. If we could clearly tie down its purpose, it would help us connect it to a specific time-period and culture; however, the device has remained somewhat elusive.

Yet, we have figured out some things regarding its functions, and it turns out that the device is truly a complex bit of tech—a real feat of engineering (for its time, anyways). Scientists and researchers assert that the assembly of bronze gears and displays was likely used to accurately predict lunar and solar eclipses, as well as solar, lunar, and planetary positions. If that's not enough, it also tracked the dates of the Olympic Games.

But whatever its overall purpose, it has been noted that "nothing like it would appear for another 1,000 years; it's truly an object out of time."

This device was discovered in an ancient shipwreck near Crete in 1901. Scientists estimate that the ship sunk approximately 2,100 years ago (sometime between 85 and 60 BCE. Initially, it was assumed that the artifacts that were found on this vessel dated to sometime around this period. However, the Antikythera Mechanism defied this assumption.

For a little perspective, at this point, the Great Wall of China was just being erected and was slowly creeping its way across the Gobi desert, and Julius Caesar won't be born for another 50 years (in 102 BCE).

However, in a paper that appeared this month in the journal Archive for History of Exact Sciences, Dr. Christián C. Carman, a science historian at the National University of Quilmes in Argentina, and Dr. James Evans, a physicist at the University of Puget Sound in Washington, suggest that the calendar of the mysterious device began in 205 B.C., which makes it half a century older than previous estimates. Ultimately, this means that the device predates paper (which wouldn't be invented in China until sometime around 100 BCE).

The researchers based their conclusions on the fact that the device's eclipse patterns fit Babylonian eclipse records. The conclusions are bolstered by previous findings. Previously, scholars asserted that the mechanism's eclipse prediction strategy was not based on Greek trigonometry, which did not exist at the time, but was based on Babylonian arithmetical methods borrowed by the Greeks.

Some have noted that it's slightly problematic to date an object to the period at which the device's calendar seems to start. As, for example, it could it have been built to see what celestial arrangements looked like in the past. However, to reiterate, these conclusions are not standing on their own. Rather, it supports other findings about the prediction strategy that the device utilized. Also, it would be a little weird to make a device to predict when previous Olympic games took place.

Either way, it is a complex and wondrous mystery. And maybe it's far older...who knows, maybe it was left behind by Doctor Who on one of his many adventures...