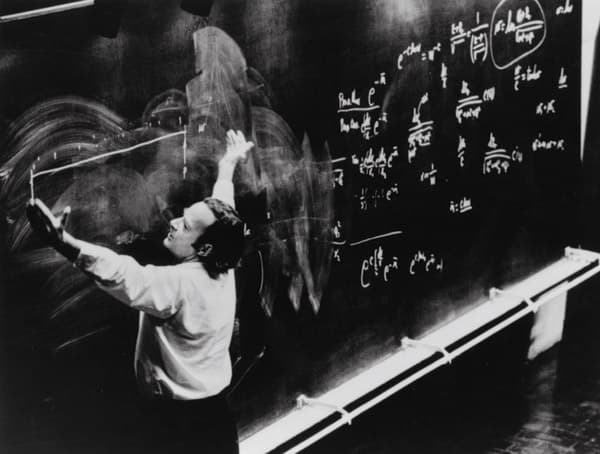 To many, Richard Feynman is an inspiration – the same caliber of inspirational as the greatest of the greats; like Albert Einstein, Sir Issac Newton and Johannes Kepler (the man that shaped the laws of motion). Professor Feynman was a scientist, a teacher, a musician, and an icon. In the physics community, he is a theoretical physicist and known for his work in quantum mechanics. Without a doubt, modern science owes a lot to Feynman, for both his work and his encouraging words to the next generation of scientists.

In addition to his formal education, Feynman spent a lot of time on self education. Through the power of reading, he was able to teach himself concepts and subjects ahead of what he was learning in school (in an interview, Feynman credits a book series ‘[subject name] for the practical man’ (such as ‘Algebra for the Practical Man’). You can still find these books online and may be able to download PDF versions).

Later, Feynman went to Princeton University where he got a perfect score on the entrance exam in mathematics and physics (this is no easy task). During his time there, he took classes with scientists such as Albert Einstein, Wolfgang Pauli, and John won Neumann. For his doctoral work, Feynman – along with his thesis adviser John Archibald Wheeler – laid the groundwork for “path integral formulation” as well as “Feynman diagrams”. He would continue this pioneering work throughout his career

NUCLEAR PHYSICS (& A TOUCH OF MADNESS):

Feynman was also one of the scientists assigned to work on the Manhattan and Trinity projects during World War II. Being a junior physicist, he wasn’t a curtail part of the project. Even then, Feynman helped to solve equations including the formula for calculating the yield of a fission device as well as some equations that were never used because the premise behind them was wrong. In his spare time, Feynman was known for playing practical jokes around the top-secret facility. Some of which, terrified the prankee into thinking nuclear secrets had been stolen by German spies.

Much later, Feynman served on the Challenger inquisition board as well as receiving awards and commendations throughout his life (most notably, the Nobel Prize in 1965 and the National Medal of Science in 1979. He also did this whilst battling cancer). These, however, aren’t some of the most interesting facts about the late-scientist.

During the Manhattan project in 1945, his wife Arline died of Tuberculosis. In 1946, Feynman wrote a letter to his deceased wife, (something that was made into a movie entitled "Infinity.") his final words in the letter were:

P.S. Please excuse my not mailing this --- but I don't know your new address.

This goes to show, even in tragedy, he never lost his sense of humor. Feynman also had a ‘curious character’ and he loved to question everything around him (his second wife even cited this as a reason for her divorce filling). Feynman lived by the mantra that he would rather not have an answer to a question instead of having the wrong answer.

A WORLD OF COLOR:

The last Feynman fun fact I’ll leave you with is this: he also had a neurological condition called “Synesthesia”. Synethesia is a condition in which stimulation in one cognitive or sensory pathway leads to involuntary and automatic experiences in a second cognitive or sensory pathway. In particular, Feynman was a grapheme or color synesthete, which means he associates letters and or numbers with colors. In general, this tends to be very helpful with remembering long strings of numbers and words – simply because they are ‘pretty’ and not just a string of text. Other forms of synesthesia include seeing colors for musical notes or even associating names with tastes.

It occurs to me that I have left out so much information about Feynman in this short description. How he used to fix his neighbors radios as a child, the fact that he was an avid bongo player, and more. Even then, Feynman is able to reach across the barrier of death and inspire us all.

How has Feynman affected your life? And, I have to ask, are there any other Synesthetes on the page? What are your experiences?