What is the Common Cold? (Myths & Facts) 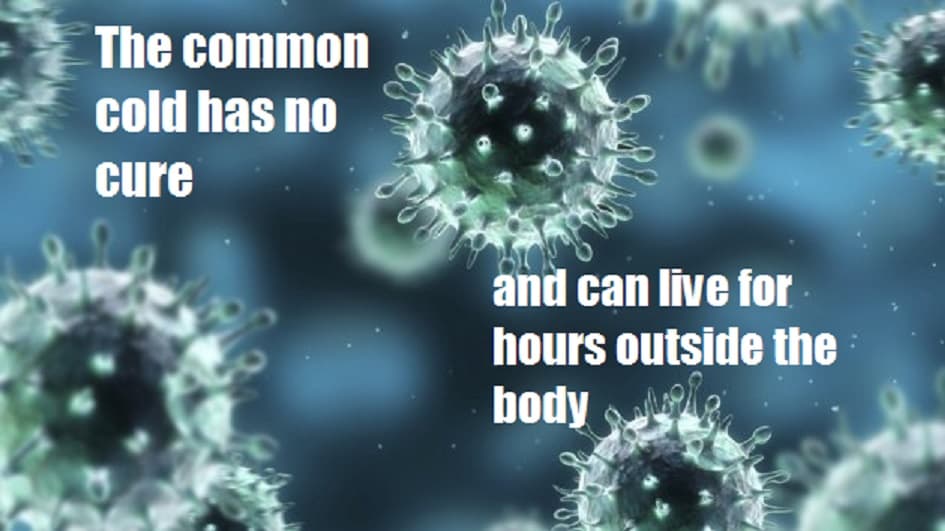 What is caused by over 150 viruses, has no cure, and causes more than one billion reactions in the united states alone? The common cold (queue scary music). This is of the most common illnesses on the planet, and one of the most frequent sicknesses that people complain about. Despite how commonplace it is, most of the population has been misled, and as a result, individuals tend to be misinformed when it comes to what a “cold” actually is.

The symptoms associated with having a “cold” are mild fever, runny nose, body aches, coughing, sneezing, sore throat,  and sounding like musician Tom Waits (hoarse voice). I’d be willing to bet that every person reading this has experienced something like this at least once in their life, if not a few times a year. So, what’s the cause of all this discomfort? Around 50% of “cold” cases are caused by the highly contagious rhinovirus, though there are many other culprits, all variants are spread in similar ways.

Causes of the “cold” are simple. Essentially, you ingest someone else’s infected excretions. This can be done in a variety of ways. In film, the saliva of an infected zombie usually causes infection to others, and it's the same thing with a cold. After an infected person touches their mouth, their hand is covered in viruses. The moment that you shake hands with this individual, you’re covered in the virus too. With an average hand washing of every 2.5 hours in America, it's likely that you will touch your mouth and infect yourself before you have a chance to wash your hands. (Huffington Post has some more information about why touching your face is just gross, here).

However, handshakes aren't the easiest forms of transmission. Ultimately, sneezing and coughing are the best chance a virus has of getting into a new host. When a person sneezes or coughs they "aerosolize" their saliva, as well as mucus from inside the nose and throat. Literally, they create a mist of infection coating their surroundings. But don’t fear, not every surface you touch is infected with these nasty viruses. Viruses similar to Rhinovirus only live about 3 hours outside of the body, and generally can’t reproduce. Frequent hand washing (with water and soap) is usually enough to remove the viruses from the skin.

Now to move on to the more complicated aspects of the "cold."

What exactly does it mean to be infected with a virus? Better yet, what is a virus? Viruses are organisms which have two or three main components. First, they have genetic material, DNA or RNA, which they use to replicate themselves. Second, there’s a protein that covers the genetic material to protect it. Third, in some viruses there’s a lipid layer over the virus to further protect it. Viruses lack enzymes (other than those needed for replication), so they require a host cell to “live” and replicate. There has been large debate regarding whether or not viruses are alive, as they have no further internal structure and cannot live long without a host cell. However, let's leave that discussion for the time being...

Now we know what a virus is, and how it gets into our bodies, but how do we stop it? First, we have to understand that “cold” symptoms are a reaction to the virus, and if you are just treating the symptoms, you are not treating (or stopping) the virus. Through this, I am trying to emphasize that a cold is not a cough. A cough is a product of irritants in the lungs (in the case of “cold” symptoms, usually mucus). If you take something to help with your cough, that's all you're doing--alleviating your cough, not treating your cold. Which brings us to our main point: Over the years, there have been hundreds of “cures” for the common cold. I’m sorry to announce, but none of them are worthy of your time.

The viruses that cause cold symptoms are always mutating and evolving. Even if we could pinpoint which of the 150-300 were causing your cold, developing an antiviral would be useless because of the low chance that a person would be infected with the same strain again. There are simply too many viruses, mutating too much, to create a cure. Not to mention that, unless there are other health problems, the common cold rarely becomes severe enough to warrant  a mass produced antiviral. It's annoying, but not deadly.

Now then, let's move on to the myths about colds:

Myth: Winter is the “cold season” and you can catch a cold from being chilled.

Truth: The only way to “catch” a cold would be to be exposed to a cold virus, being chilled, having wet hair, or it being winter are all NOT ways you can get a cold. These have nothing to do with catching a cold virus. That being said, dry air can aid a virus that is trying to make its way into your body because dry sinuses = less protective mucus, which makes it easier for a virus to break in.

Myth: Vitamin C will protect you against colds.

Truth: Unless a deficiency is already present (which is rare, and is usually caused by other illness) the body already has as much vitamin C as it can use. Our bodies do a good job of using what it needs, so as you take vitamin C supplements, what your body doesn't need is passed through the kidneys and excreted. If you’ve got enough of a vitamin C deficiency that you actually need to take 200mg/day, a cold is the least of your problems and you should look at a different diet (click for more info on vitamin C).

Myth: Antibiotics will cure a cold.

Truth: Absolutely not. Antibiotics are for bacterial infections, not viral infections. Taking antibiotics for a cold (who knows why a doctor would prescribe them) will only worsen the issue of antibiotic resistant bacteria, and may cause more harm than good. On a similar note, over the counter cold medicines will only relieve symptoms, but they will do absolutely nothing to the cold virus. This includes; acetaminophen type pain relievers, antihistamines, and expectorants. Masking of cold symptoms may make it seem like the cold is getting better faster, but really you’re just more comfortable through the natural process that takes 7-10 days.

There are many other myths out there, that I can’t bring myself to discuss – hopefully we all know wearing garlic cloves around the neck does nothing to the common cold.

Rest: While there is no cure for the common cold, taking it easy for the duration of your cold will make you feel less miserable. Also, if you think about your body as a machine, rest helps use the resources you have to clear the body of viruses.

Hydration: This is key in treating colds, as your body fights off viral infection, it’s using more water in metabolic processes, along with sweating from a fever. Keeping your sinuses moist can also help usher the virus out of your body, as well as help sore throats. Drink water at any point that you’re awake during a cold, and obviously stay away from dehydrating beverages.

Chicken soup, in addition to being a comfort food (comfort is about the best you can do with a cold) has been shown to act as an anti-inflammatory inhibiting the movement of neutrophils cells, also speeding up the movement of mucus, reducing the time in which viruses are in contact with the sinuses.

In the end, cold viruses will attack, last a week or so, and there’s nothing we can do about it--at all. My best advice, and the best advice of doctors, is just rest and try to stay comfortable, whatever that means to you. Either way, to me, the worst part about the common cold is the battle between myth and science that we create, don’t let yourself fall into that sickness.