Researchers May Have Discovered Why Cats Love Cardboard Boxes 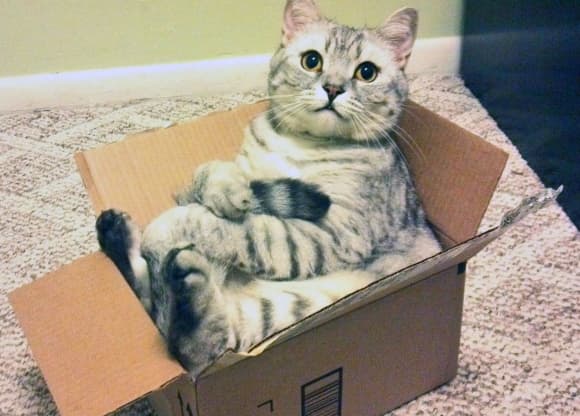 Did you ever wonder why cats are crazy about cardboard boxes? In a paper published in Applied Animal Behavior, researchers discovered that these boxes reduce the stress levels of the cats. of course, we could probably assume this, as cats wouldn't nap in something that makes them stressed increases how tense they are.

But how does a cardboard box reduce stress in cats?

The researchers assert that it has something to do with the smell of cardboard boxes. The scent ultimately has soothing properties. In addition to this, cats do not deal well with stress. Cardboard boxes generally serve as small, contained spaces that only have one avenue of approach, allowing cats to be the masters of their surroundings (at lease from their perspective).

The researchers, led by C.M. Vinke (Faculty of Veterinary Medicine, University of Utrecht), investigated how cats responded to boxes when they were first placed into animal shelters. Ultimately, their findings indicate that cats provided with a hiding box are able to recover faster in their new environment compared to cats without a hiding box.

The Domestic Cat: The Biology of its Behaviour explains: “Cats do not appear to develop conflict resolution strategies to the extent that more gregarious species do, so they may attempt to circumvent agonistic encounters by avoiding others or decreasing their activity."

This could be very important information for those who have recently adopted (or plan on adopting) a new cat, as a high stress level can result in increased instances of diseases in cats. Its also notable for people to remember if they have recently moved.