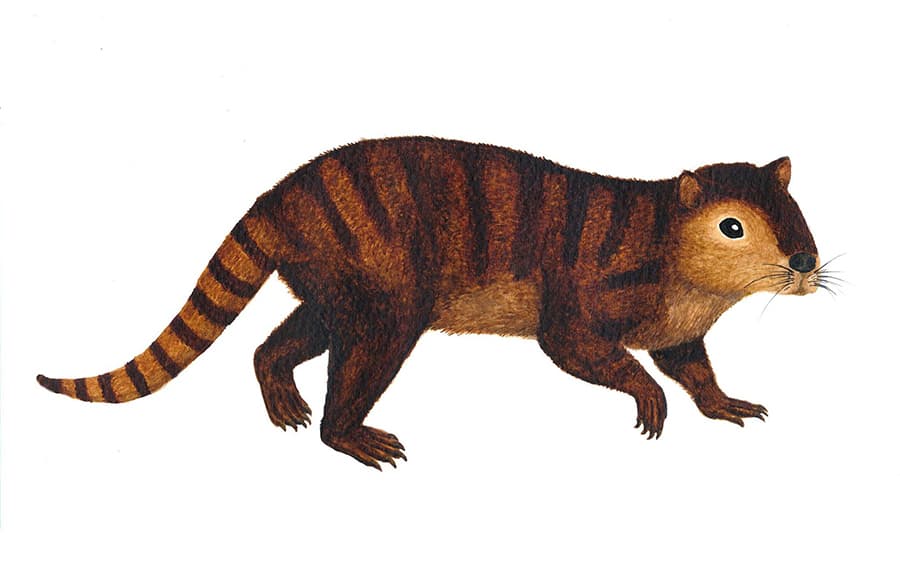 When an asteroid took out the dinosaurs 66 million years ago, many mammals died off alongside them. A survivor, and perhaps a pioneer of the “Age of Mammals” was recently discovered. Its name is Kimbetopsalis simmonsae.

The Kimbetopsalis was one of the largest mammals around after the dinosaurs’ reign of power ended in ash. If you’re imagining an even more intimidating beast than the Tyrannosaurus Rex, a creature with sharp teeth and height to match, think again.

Instead, imagine a three-foot-long beaver, complete with its buckteeth, broad face, and chunky frame, scurrying around lava flows. Think Rodents of Unusual Size from The Princess Bride, but friendlier.

The Kimbetopsalis is actually not a rodent, though. It's a multituberculate mammal, a rodent-like creature that died out about 40 million years ago. The creatures from the genus Kimbetopsalis first emerged in the Jurassic period. These fuzzy creatures stayed hidden, as to not fall prey to the predators that surrounded them.

A million centuries later, they emerged, inheriting the spot at the top of the food chain.

“The history of life hinges on moments that can reset the course of evolution,” Stephen Brusatte, a professor of vertebrate paleontology at the University of Edinburgh. As the world changed rapidly due to the meteorite impact, “dinosaurs couldn’t cope and all of a sudden they were gone. Their size and strength couldn’t save them. Mammals fared better, and now one species of brainy ape occupies that dominant place in nature that was once held by the dinosaurs.”

The Kimbetopsalis actually used to be quite small. However, over the course of just 500,000 years, it grew, utilizing the newfound ecological space. The creatures hold the title for the longest-living mammal group in history thanks to its 160-million-year run.

In a paper published in the Zoological Journal of the Linnean Society, scientists announced the discovery of the Kimbetopsalis. A few teeth and a skull fragment were found among the sand and rock formations of New Mexico’s badlands during an archeological dig.

Carissa Raymond, a sophomore at the University of Nebraska, uncovered the fossils. This was her first dig. At the time she found the fossils, she didn’t even have formal training in fossil finding and had never taken a mammal biology class.

Raymond was recruited by UNL paleontologist Ross Secord, along with two of her peers, to assist with fieldwork in the San Juan Basin. On their third day of digging, Raymond spotted some black teeth lying exposed along with jaws from both sides of the head containing molars and premolars.

"I'd never seen anything like this before," said Secord. In fact, this was the first new multituberculate mammal to be found in the San Juan Basin in more than 100 years, and an entirely new genus.

The fossil of the teeth helped the scientists identify and better understand the diet of the Kimbetopsalis. The huge, knife-like incisors benefited the herbivore in the lush semitropical forest. At the time it lived, New Mexico was actually far from a dry desert. The teeth had cusps arranged in rows (kind of like corn kernels or a meat tenderizer).

This find will act as a catalyst for more work analyzing how mammals have changed over time and to identify sudden changes related to climate shifts. Raymond hopes to continue with this research.

"I knew it was cool-- but not this cool," said Raymond, of her discovery.