Reaching for the Stars: The Dream of Leaving Earth 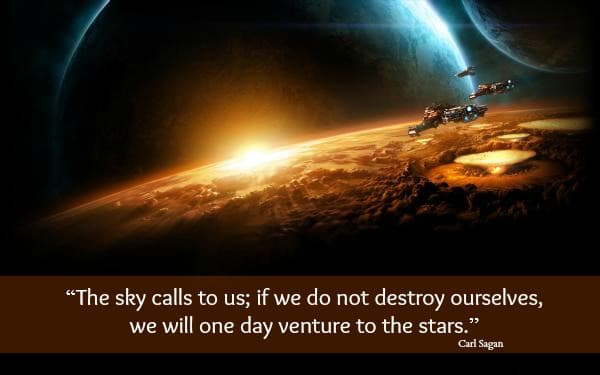 Have you ever heard someone say that the universe seems like a small and rather uninteresting place? If so, it’s not terribly surprising. The universe is full of wonders; however, we don't get to see them all that often. In fact, it has been almost 40 years since humans have ventured farther than 400miles (643km) from our tiny corner of the galaxy.

Historically, economic concerns have been the determining factor in space exploration. And as the cost of material production continues to skyrocket, it seems like we’ll never make it to another planet—much less another star. Year after year, the dream of traveling to through interstellar space becomes more and more elusive. But that doesn’t mean that we should abandon hope. Indeed, just the opposite. When the moment is right, we need to be prepared to reach out and head for the stars.

So what would it take to get us out into the cosmos? It seems that it will require a little bit of something old, and a mighty portion of something new.

Case in point: In 1976, the Helios 2 probe headed from Earth on its journey to explore the Sun. Traveling at speeds exceeding 157,000 mph (252,600km/h), Helios 2 is the fastest spacecraft ever built. However, at this rate, it would take us around 17,000 to 18,000 years to make the 4 light-year trip to the nearest star, Proxima Centauir. And when you start thinking about what it would take to supply people for this journey (how much food, water, and fuel these travelers would need), it becomes apparent that the spacecraft designed to carry these passengers would need to be immense. Unimaginably immense. So it’s clear that new technology is a must.

A Nuclear Pulse: In this model, thermonuclear bombs would be expelled from the back of a spacecraft and explode against a “pusher plate.” The force of these explosions would subsequently propel the craft faster and farther into space. Such an enterprise is feasible using current technology, and it would get us to Proxima Centauir in centuries instead of millennia. However, the spacecraft would still need to be huge, and there would be extreme dangers from both internal explosions and post-detonation radiation.

Beamed Solar Sail: This giant piece of reflective fabric would use solar photons (particles of light) to propel a vessel to the edge of the solar system. After passing into interstellar space, an orbiting laser would have to be used for propulsion. Again, this model is feasible with current technology, and it would get us to the stars in mere centuries. The problem is that such a sail would need to be roughly 100,000 square-miles (about the size of Mississippi and Alabama combined), and the laser would require more electricity than then entire Earth currently does.

Nuclear Fusion: Without getting into all of the scientific know-how, this model would use heat to fuse deuterium pellets, and magnets to direct the subsequent explosion out the back of the craft. These explosions would propel the craft at excessive speeds. With such a device, we could reach the stars in decades! This model is far less dangerous than using bombs, but deuterium is exceedingly rare and we currently lack the technology to make a reliable fusion reactor.

Antimatter: This plan would collide protons with their antimatter twins, and magnets would be used to direct the subsequent explosion and propel the craft forward. Like nuclear fusion, this method would get us to the stars in decades. However, radiators the size of Florida would be needed to dump all of the excess waste and heat.

Of course, there are a number of other theories and ideas. These are just a few of the plans in development by agencies like Icarus Interstellar, a nonprofit organization whose mission is “to realize interstellar flight before the year 2100.” Currently, all of these theories are out of our grasp and seem unbelievably fantastical. However, one of them may lead to a feasible enterprise. The atoms in our bodies were manufactured in the depths of stars, so it seems only fitting that we return to them someday. Of course, this will only happen if determined individuals continue to work on this project...