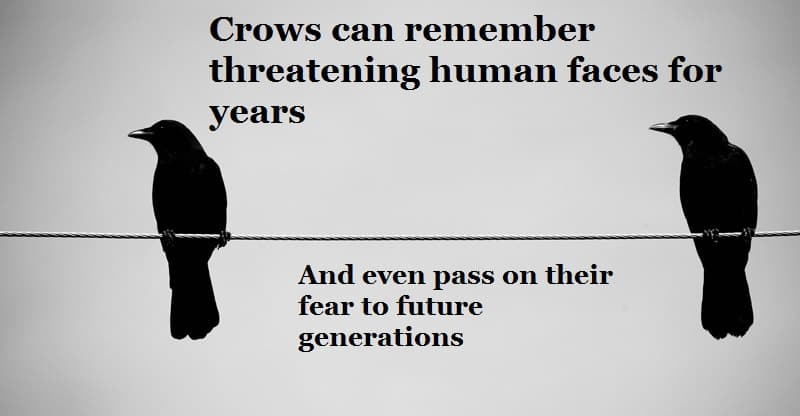 “The Raven,” by Edgar Allen Poe, may seem like gloomy poetic fiction, but a raven speaking “nevermore” is not. (Raven speaking "nevermore" here). Ravens can speak, but that’s only the tip of the iceberg of intelligence for the Corvid family of birds (which includes crows, magpies, jays, in addition to the raven and many other species).

So, how smart is one of the most common family of birds? Cracked.com has this humorous and horrifying article about crow intelligence, which sarcastically hits on the big indicators of just how smart these birds can be.

Corvids are known for their speed in solving problems with the use of tools, and their careful examination of the situation. Bernd Heinrich, of the University of Vermont, has spent many years studying the raven’s ability to problem solve. In this study, he and his colleagues designed an experiment to test how a raven would problem solve when a tasty reward is given. Food was hung on a string behind a wire cage, and it was attached to the perch containing the raven. In order to get the treat, the raven has to pull the string up, then hold it on the perch before pulling up another length, repeating until the food is within reach. Some adult birds would examine the situation, then (without hesitation) complete the task in under a minute. This shows that the raven solved a problem internally--without using the process of trial and error.

If using tools doesn’t surprise you, consider the fact that crows can remember who you are. The University of Washington, Seattle did a set of experiments in 2006 to test the memory of local crow flocks. John Marzluff, the brains behind the experiment had researchers wear rubber masks (one of Dick Cheney) while capturing birds with a net launcher. For three years afterward, the crows remembered the masked faces, and alerted others of their presence. The birds took defensive measures as well by diving at the researchers. If that wasn't scary enough, future generations of birds who had never seen the masks reacted in the same manner, indicating that the crows were passing down the stigma throughout generations. The published results can be found here.

I don’t know about you, but I have a new respect for these flocking, trash eating, squawking birds. Ravens have shown that they can solve problems (assuming they get rewards), and crows have shown memorization of trash pickup days of whole neighborhoods over many months. Next time you see a crow, just remember, it probably has your face down...just in case you try anything fishy.