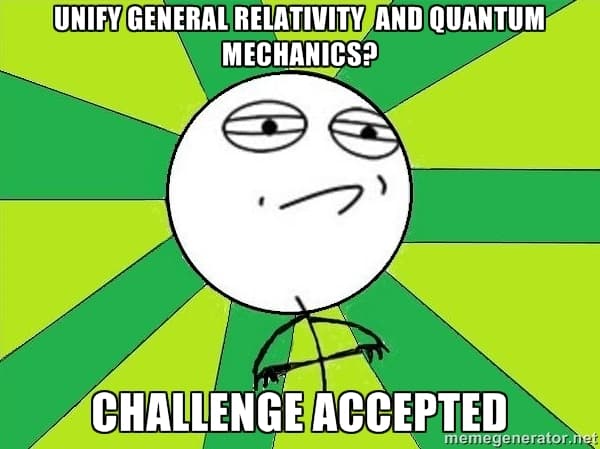 Question: I read a brief history of time by hawking and I am interested to know why Einstein’s theory of relativity and quantum physics can’t come together to come up with a theory of everything?” Asked by Siddharth Gadepalli

Answer: Scientists have been working on this very issue for years, and we’re still faced with the same problems, although the discovery of the Higgs Boson is helping.

In one corner we have Quantum mechanics, a group of theories developed by physics in the early to mid-1900s. Influential figures were, but are not limited to Max Plank, Werner Heisenberg, Wolfgang Pauli, Erwin Schrödinger, Richard Feynman, and Albert Einstein. Quantum mechanics is the theory of the very small, interactions between atoms and the particles atoms are made of. Quantum theory does a good job of describing chaotic wave-like particles in ways classical physics never could.

On the other side, we’ve got Einstein and General Relativity, which gives us black holes, an expanding universe and allows the TARDIS to travel

through time (well, maybe not just yet). Einstein developed two big points in General Relativity; first, space and time are a unified dimension regularly called “space-time”, secondly Einstein gives Newton a pat on the back with a reason for the existence of gravity. Very large objects, according to General Relativity, can curve and distort a smooth space-time, creating the gravity we know and love.

Problems in unified field theory arise with great force, literally. Quantum Mechanics describes in detail three fundamental forces; the strong (affecting particles inside the nucleus of an atom), the weak (responsible for radioactive decay), and the electromagnetic (binding electrons to atoms, and allowing atoms to work together to form everything we know). There is a fourth force, gravity, which is missing from the quantum model. General relativity does a good job of explaining what gravity is, when and where it happens, and even what happens when there’s an infinite amount of the force (ex. Black holes).

To answer the question above directly, the issue is that gravity is not cooperating with Quantum Mechanics. The three forces I first mentioned have all been proved to work together, and interact with each other to form the world we see around us (the electroweak interaction is one example) – Gravity however has not been so kind. As we don’t know how the force of gravity is carried (via a particle, like a photon for electromagnetic force), or how it interacts with other forces, we can’t successfully unify Quantum Mechanics and General Relativity.

There are other issues when joining the theories, like dealing with space-time of course, but it seems a quantum theory of gravity is the Holy Grail. Scientists will continue to try to force gravity into a quantum world by way of particle accelerators and study of black holes (because they’re infinitely small, but have infinite gravity), there’s no doubt that someday we’ll reach a conclusion.