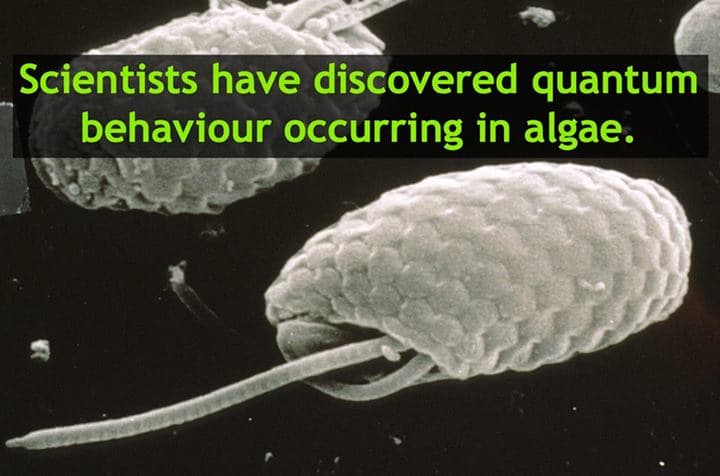 Quantum biology is really what it sounds like. It's the analysis of biological functions at the quantum level. This goes beyond simple chemistry and instead focuses on life's ability to actually control quantum forces. Just as life evolved to manipulate macro forces, allowing us to move in and manipulate our environment, life could have also evolved to manipulate the quantum scale. The emerging science of quantum biology studies this process, and they've have made an incredible breakthrough.

Meet the cryptophytes. They are a type of single celled organisms, most commonly known to the general public as "algae." This algae in particular likes to live at the bottom of large bodies of water, or underneath ice. The important thing is the algae lives in places that don't get a lot of sunlight.

Green things like algae use photosynthesis to do life-sustaining things - that is basically "plant biology 101" summed up in a single sentence, you're welcome. Before we continue with photosynthesis, we should probably talk about quantum mechanics.

Specifically, this experiment dealt with quantum coherence. Quantum coherence is the underlying thing that allows quantum superpositions to happen. A quantum system is coherent when all of the waves are "in step" or "in sync" with each other. A system that is coherent is able to exist in different states simultaniously, which we usually call quantum superpositions and then follow the statement by making Schrodinger's cat jokes. Normally, researchers only see this behavior in the lab, but then that brings us back to the algae.

Scientists found a couple of algae that are able to turn on and off coherence, allowing them to harvest light and operate with a much greater efficiency. Professor Paul Curmi, the senior author of the paper, stated in a press release, "Most cryptophytes have a light-harvesting system where quantum coherence is present. But we have found a class of cryptophytes where it is switched off because of a genetic mutation that alters the shape of a light-harvesting protein. This is a very exciting find. It means we will be able to uncover the role of quantum coherence in photosynthesis by comparing organisms with the two different types of proteins."

Can we pause for a moment to comprehend how cool that is?

All in all, if the organism is able to harvest light more efficiently, it can life in conditions that are much darker. That's why this insane feat of biology is useful.

As mentioned before, quantum biology is an emerging field of science studying the ways biology use intelligently manipulates quantum mechanics to it's advantage. Many researchers believe this field has a lot to teach us. Perhaps it will be the next revolution in biology as wonderful as realizing organisms exist on the microscopic level.