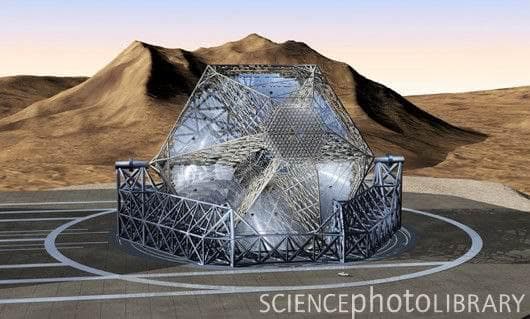 The Giant Magellan Telescope is currently under construction, the initial blast on the mountain tops of Chile actually happened March 23 this year at the location where the Magellan telescope is going to be built. GMT is being built atop Las Campanas Peak in Chile at an altitude of 2,550 meters (8,366 feet) above sea level, one of the reasons for this location in particular is that has a fairly stable weather pattern that spends most of the year with clear nights. GMT is a $700 million project that is being funded by the U.S, Korea and Australia who has currently put in about 10% of the funding, ultimately this will be a very good investment for all Australian astronomers.

The Giant Magellan Telescope is going to be comprised of seven 8.4m mirrors which coupled with Adaptive Optics will give this telescope the resolution on the order of 10 times better than what we are currently able to get from the Hubble Space Telescope, this is a big achievement on its own from a ground based telescope. GMT is expected to be completed by 2018 so only another 6 years to wait, what are we expecting to find?

According to the GMT website this telescope is going to be used to study extrasolar planets, the formation of the first galaxies and hopefully help with our understanding of dark matter and dark energy. I would also likely think that a telescope of this magnitude would also be able to get a glimpse of the First Stars or at least their bright supernovas, although this may be only be capable of the James Webb Space Telescope or larger telescopes.

The Thirty Meter Telescope is what you would call a very large telescope but it is composed of many many smaller mirrors. TMT has 492 mirrors each about 1.44 meters in size and there are a few very good reasons for doing things in this manner. It is easy to imagine that it would be much cheaper to make nearly 500 relatively small mirrors and to transport them than to make and transport one 30 meter mirror.

Like all new telescopes it has adaptive optics which allows it to effectively see through the atmospheric distortion. Unlike many telescopes it is also going to have a large range of wavelengths that are going to be observable, from 320 nanometers to 28 microns. This means it'll be effective from the ultraviolet all the way into the infrared part of the spectrum. Also unlike many telescopes it has a really long focal length of f/15, in comparison the Anglo Australian Sliding Springs Observatory has a focal ratio of f/3.3 which gives it a much larger field of view.

TMT is going to be located on Mauna Kea, Hawaii at an elevation of 4,050 meters above sea level and this makes it the second highest of the candidate sites and although there can be a little bit of light pollution on that part of Hawaii it's not likely to cause any problems. Along with fairly stable weather patterns for the majority of the year it does make for a good site.

The Overwhelmingly Large Telescope is as the name suggests, overwhelmingly large. OWL has an aperture of 100 meters, the same distance that Bolt ran in 9.58 seconds so this gives a scale that we can relate to. This telescope is made up of 3042 1.6m mirrors which are all on their own a manageable size to forge and transport.

There isn't currently a location set for OWL and this is because the project has been scrapped, it had a budget that was overwhelmingly expensive so maybe in years to come it might be built. Although OWL is no longer being built at this current stage ESO has announced that they are going to build a different very large telescope which they have called.

The ESO and astronomers world wide are wanting to get more information on Dark Energy and maybe actually work out what it is. The EELT may even be able to view the atmospheres around exo-planets potentially finding life on other planets. Astronomers are also wanting to get a glimpse of the first light of the universe with this telescope.

Sadly however this telescope isn't going to start construction until later this decade or early next so there is a long time to wait.

It is really nice to think that within the next decade there is going to be an all new class of very large telescopes around the world that we'll be able to tap into. The past two decades have been the time of 8-10m telescopes with the likes of Gran Telescopio Canarias, Keck and SALT and VLT. These next few decades are going to be the decades of the 20-40m telescopes so very exciting times. If the global economic climate gets better over the next few decades there is always the hope that the Overwhelming Large Telescope will actually begin construction. As good as OWLs replacement the Extremely Large Telescope is, it still only fits the profile of Originally Was Large (OWL).