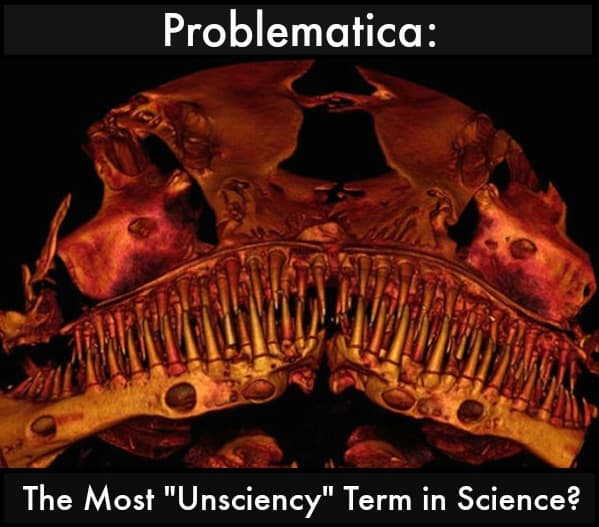 Based on the name alone - one should have an easy time deciphering the nature of the subject matter. To summarize: problematic.

Several different kinds of these creatures have been found - many of them so bizarre, with seemingly contradictory characteristics - we don't even have a name for them. Therefore, they are bunched together in a similar group of organisms, humorously called "problematica." Organisms in this class of species generally contain unexpected (and sometimes inexplicable) characteristics of other species (many of them can be traced back to the Cambrian and Ordovician periods - some 400 million years ago. Meaning; many of them may hold clues about the progression of evolution)

One of my favorite examples of problematica is a sea sloth found and added to the fossil records. We have a modern version of the creature - slow moving, tree dwelling mammals that stretch across six subgroups of species - but it pales in comparison to fossils that were found, originating some 35 million years ago.

Four "sea sloth" species have been discovered through fossil records - telling us that these prehistoric creatures dwelled near coastal regions. Their teeth also tell an important story about their diet. Apparently, scientists noted that the relics of their teeth showed wear patterns that matched that of sand abrasions (anyone who has ever visited the ocean should have a good idea of how these abrasions were formed - through continuous interactions with coarse grains of sand). This could indicate that the creatures feasted on vegetation above the water's surface.

It's unclear why the species evolved in such a way, or why they ultimately went extinct, but they sure are interesting. Greg McDonald, a paleontologist at the Hagerman Fossil Beds National Monument in Idaho, put it like this: "'If we were to find a flying sloth, it would be about as unexplained as this."

And then, we have a creature so strange, it's more plant-like than animal-like. It's even ridiculously hard to explain, so I'll let the researchers that found it describe it:

"This stalked animal (reaching at least 20 cm in length), has a large ovoid calyx connected to a narrow bilayered stem and a small flattened or bulb-like holdfast. The calyx is enclosed by a flexible sheath with six small openings at the base, and a central terminal anus near the top encircled by indistinct openings. A prominent organ, represented by six radially symmetrical segments with comb-like elements, surrounds an internal body cavity with a large stomach, conical median gut and straight intestine. Siphusauctum gregarium was probably an active filter-feeder, with water passing through the calyx openings, capturing food particles with its comb-like elements. It often occurs in large assemblages on single bedding planes suggesting a gregarious lifestyle, with the animal living in high tier clusters. These were probably buried en masse more or less in-situ by rapid mud flow events.

Siphusauctum gregarium resembles Dinomischus, another Cambrian enigmatic stalked animal. Principal points of comparison include a long stem with a calyx containing a visceral mass and bract-like elements, and a similar lifestyle albeit occupying different tiering levels. The presence in both animals of a digestive tract with a potential stomach and anus suggest a grade of organization within bilaterians, but relationships with extant phyla are not straightforward. Thus, the broader affinities of S. gregarium remain largely unconstrained."

[Reference: "A New Stalked Filter-Feeder from the Middle Cambrian"]

The creature, called Siphusauctum gregarium, lived more than 500 million years ago (during the Middle Cambrian period). Additional research has shown that the creatures are exceedingly weird, especially where their bulbous-structured feeding-system (leading to its internal system and gut) is concerned. It seems to be completely unique among not only similar kinds of organisms, but of all of the creatures known to exist over the course of Earth's existence.

Meet the Newest *LIVING* Addition to the Problematica Group:

Scientist just unearthed the strangest species yet; the Kryptoglanis shajii. This creature - found exclusively within the Western Ghats Mountain Range in Kerala, India - can only be explained as an alien/catfish hybrid.

Obviously, on the surface, it's your typical ocean-dwelling, horrific-looking creature.. That in and of itself is nothing strange. What is strange, however, is its bone structure. Since its initial discovery in 2011, biologists and ichthyologists (people that study fish) have struggled to find a category to stick it in.

Perhaps the strangest thing isn't what it does have, but what it lacks. A team of researchers - led by John Lundberg; the emeritus curator of ichthyology from Drexel University - have been looking into these oddities over the last few years and their findings have been just as unexpected as expected.

According to Elizabeth Palmero, a contributor on LiveScience:

"From the outside, Kryptoglanis shajii looks similar to other catfish, but a closer look inside the fish yields some surprising discoveries, Lundberg said. He and his colleagues used digital radiography and high-definition CAT scans to study Kryptoglanis' bone structure, finding that the fish is missing several bony elements.

That discovery alone was not enough to cause a stir among the experts, who explain that many subterranean fish lack some of the bones possessed by others of their species. What did surprise the researchers, however, was that the shapes of some of Kryptoglanis' bones were utterly unique among fishes of any species."

Lundberg even likened the fish to a bulldog in a statement, saying that some of the abnormal structures among the bones resemble the snout of a bulldog (a characteristic that is a prime example of selected breeding). Only, according to Lundberg, "we don't know yet what in their natural evolution would have led to this modified shape."

As of right now, the Kryptoglanis shajii is the only member of its genus and its family. If all of modern civilization disappeared tomorrow, along with all of our books, research and knowledge, people might run across fossilized kryptoglanis shajii in a few million years (if humans survive that long) and throw their hands up in the air in frustration.

You can read a great article about problematica here.