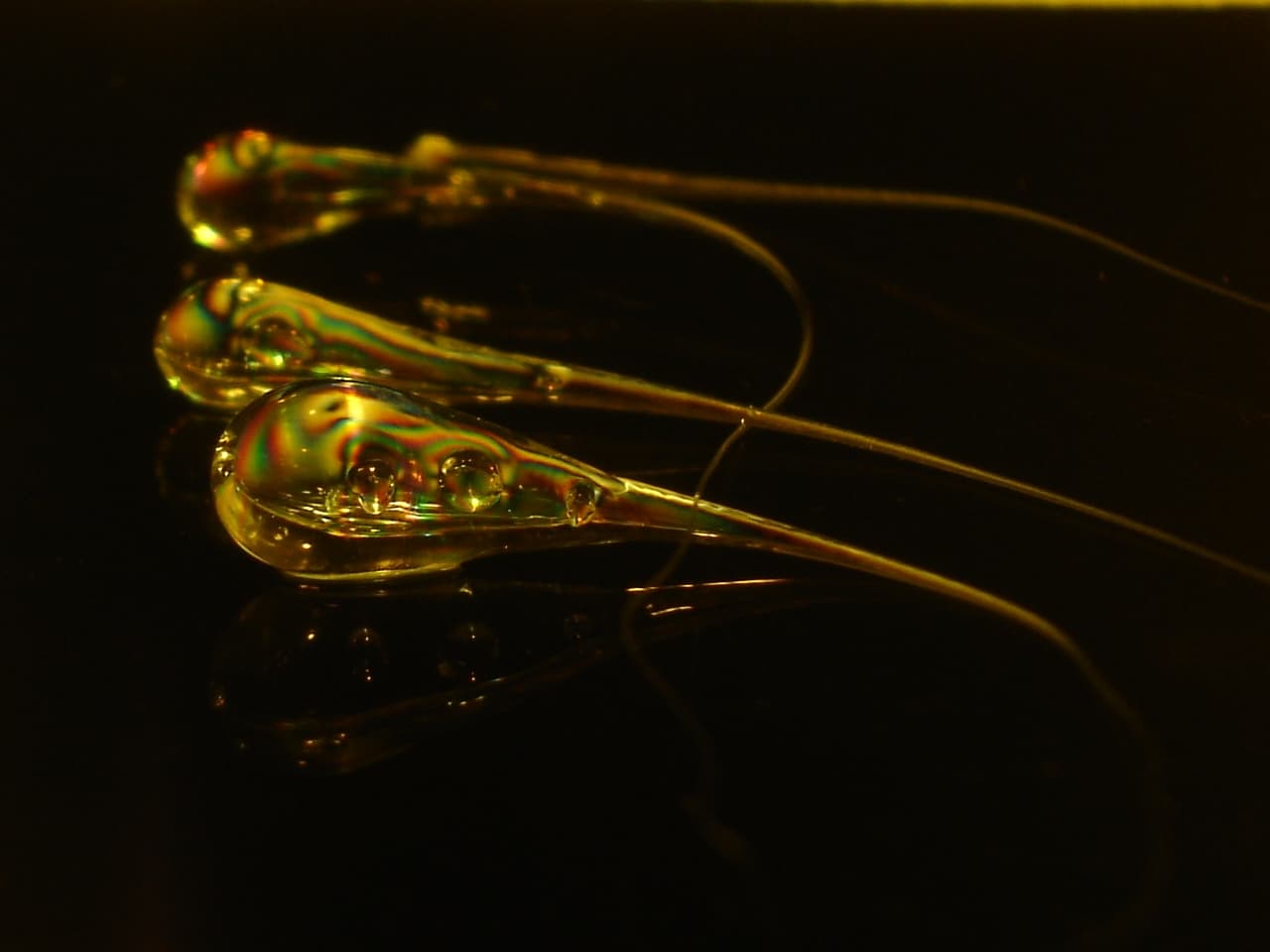 As a general rule of thumb, some of the most interesting natural phenomena tend to be the type that most people have never heard of. "Prince Rupert's Drop" is one such phenomenon that is almost certainly one of them.

In the simplest terms possible, this phenomenon can be seen when molten glass comes in contact with cold water. Almost instantly, the outermost surface of the glass cools very quickly, while simultaneously shrinking in surface area. Yet as the outer-shell solidifies, the inner-core remains fluid, resulting in the liquid spreading out and taking the shape of the cooler shell

Once the fluid in the core is on the cusp of solidifying as well, it too shrinks. Only now, the outer layers have solidified, thus it can no longer adjust itself accordingly to accommodate the solidifying core.

As you can imagine, the internal pressures start to rise. As they do, the insides start pulling on the outside equally from each direction, until the glass has built up an ample amount of energy just waiting to be released.

Now, to the uber cool part:

If you try shattering the thin layer of glass near the tail of the glass sculpture, you incite a chain reaction that sees all of this energy unload at essentially the same time, sparking a shockwave that makes its way throughout each part of the fixture bit by bit, disintegrating the material as it spreads.

All of this goes down in a mere millisecond, so you can't truly appreciate the view until you see this video.

The people from "Smarter Every Day" show the incredible process happening at 130,000 frames per second.

What's even more amazing is the fact that this material is almost invulnerable (like, you can't even smash it with the hammer) at every other section besides the tail, as these internal pressures essentially compress the surface and keep it held together, which,in turn, prohibits small cracks from growing into full-blown fractures.

Read This Next
Futurism
Interview: Michel Bauwens on Peer-To-Peer Economics and Its Role in Reshaping Our World
Futurism
Stunning Images Chart Shapeshifting Nature of Venus' Polar Vortex
Futurism
Astronomy Photo of the Day: 11/10/15 — CARMA-7
Futurism
No, Science Does Not Say That Religious Children Are More Likely to be 'Immoral"
Futurism
Scientists Take a Closer Look, Find No Evidence of Alien Megastructures
More on FromQuarkstoQuasars
What’s the (Anti)...
6. 12. 21 on the byte
Physicists Find Particles That Switch Between Matter and Antimatter
Futurism
11. 7. 15 on futurism
Newfound Radio Galaxy is the Largest Known, And It's Dying
Futurism
11. 5. 15 on futurism
New Visualization Shows Incredible Variety of Extraterrestrial Worlds
READ MORE STORIES ABOUT / FromQuarkstoQuasars
Keep up.
Subscribe to our daily newsletter to keep in touch with the subjects shaping our future.
+Social+Newsletter
TopicsAbout UsContact Us
Copyright ©, Camden Media Inc All Rights Reserved. See our User Agreement, Privacy Policy and Data Use Policy. The material on this site may not be reproduced, distributed, transmitted, cached or otherwise used, except with prior written permission of Futurism. Fonts by Typekit and Monotype.