Predicting 2017: How Future Energy Will Change Our Lives

The world will never be the same. 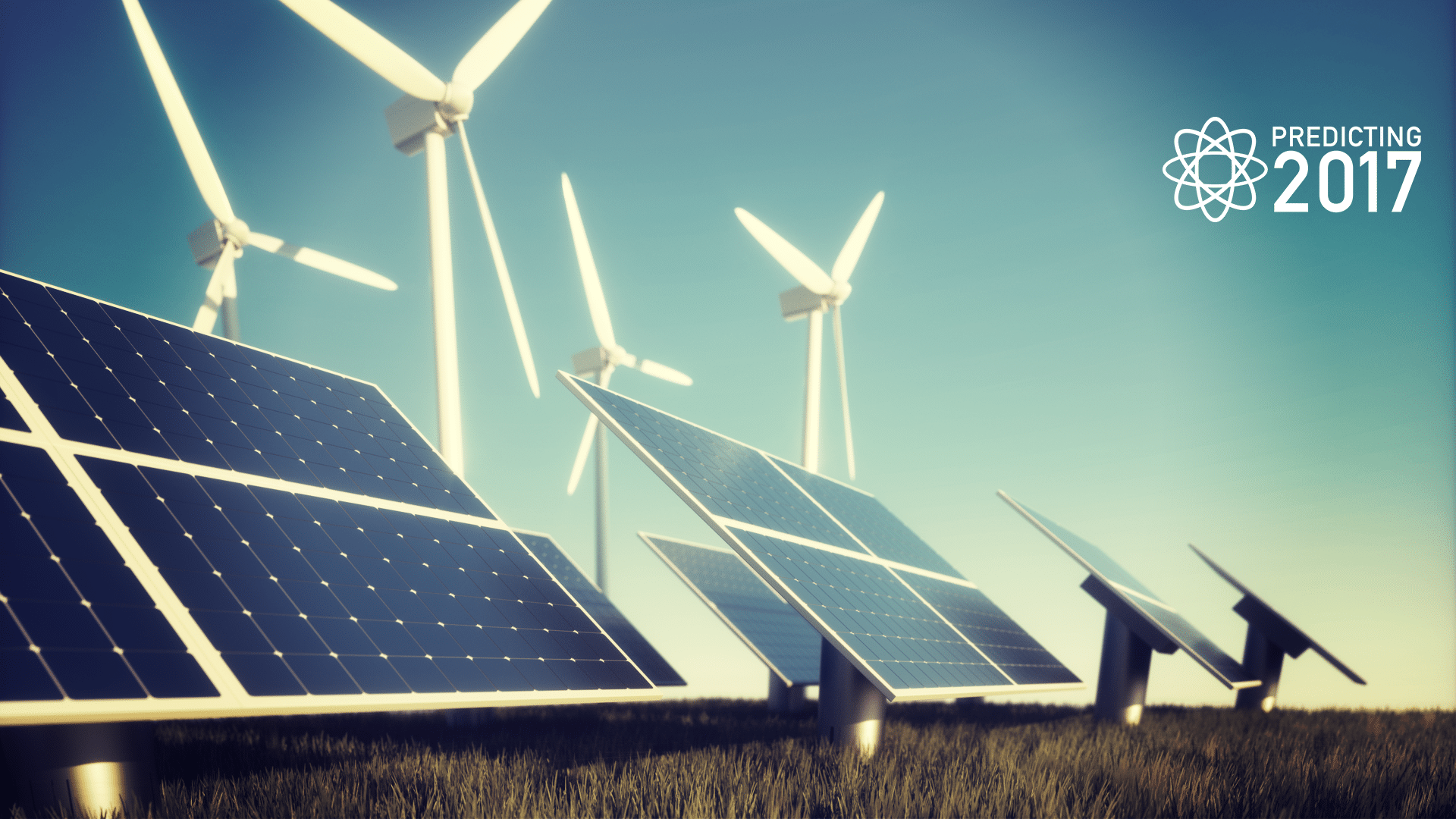 2016 was a remarkable year for energy—solar power became cheaper than fossil fuels, Elon Musk unveiled new solar roof tiles, the US installed its first commercial offshore wind farm, and a teenager devised a method for creating cheap “solar leaves.” If last year is any indication, 2017 promises to be an even wilder ride.

Here’s a look at some of the ways the coming year promises to revolutionize our energy future.

2017 may well be the year that some of the most promising emerging energy markets…well, emerge. Foremost among these is Africa, where we’ve seen the spread of pay-as-you-go (PAYG) solar startups—such as PEGAfrica—which provide solar arrays to households in West Africa on credit.

The business model obviates the need for a secure energy infrastructure by combining solar photovoltaics (PV) with energy storage and mobile pay technology—a simple, effective plan for supplying electricity where it’s most needed. PAYG solar is spreading through Africa like wildfire and 2017 promises to see more of it, with new startups getting in on the act, and new technologies refining the business model. Africa could be the new energy frontier, with a renewable energy infrastructure that might just become the envy of the world.

If the use of renewable energy is to become economically competitive, then it’s incumbent on the largest energy consumers to commit to its development and consistent use—and this is just what we’re beginning to see the major Silicon Valley tech corporations start to do. Google has announced that it plans for all of its data centers to be powered by renewables no later than 2017. Facebook’s targets are more modest, but its newest data center—set to be constructed this year in Los Lunas, New Mexico—will receive 100 percent of its power from renewable energy.

All of this translates into a massive new injection of capital investment in renewable energy technology, which could make 2017 the tipping point for innovation and affordability as major energy companies and startups alike scramble to fill this huge unmet need. At the same time, the aviation giants are bankrolling something of a green revolution of their own—this time involving the use of renewable jet fuels.

JetBlue made headlines when it announced a massive renewable jet fuel purchase agreement, and quality aviation biofuels have finally reached the market with Honeywell Green Jet Fuel and Neste Renewable Aviation Fuel.  Look for 2017 to be the year when airlines make major investments in biofuels, and start the shift toward their regular use.

Meanwhile, the coming year will see a number of new innovations in the evolution of cleaner, more efficient energy systems as scientists and startups leverage massive national investments in research and development to pioneer novel technologies.

Take the US Department of Energy’s budget request for FY 2017, which includes a preview of key research initiatives for the coming year.  We can expect important investments in clean transportation—whether it’s slashing the cost of battery and energy storage technology, developing next generation biofuels, researching advanced sensors and data analytics for improved energy management, or further refining vehicle automation and connectivity. Other areas of research will concentrate on more efficient power conversion using supercritical CO2, whether in conventional fossil fuel plants or concentrating solar power arrays, and combining pumped hydroelectric energy storage with solar PV.

And let’s not leave out fusion research: 2017 could be the year of remarkable new breakthroughs in fusion energy, with startups like General Fusion and Tri Alpha attempting to achieve on a (comparative) shoestring what lavishly funded behemoths like the ITER Project have failed to do.

The Fly in the Ointment

Extrapolating 2017 from the developments in 2016 is all very well and good; but when it comes to forecasting the future, it really boils down to the unanticipated. And there are many variables that could change the equation—perhaps none more important than the incoming Trump administration.

President-elect Trump has signaled a desire to shift the country’s energy policy away from the Obama administration’s commitment to renewable energy—in fact, reinvigorating the fossil fuel industry, particularly coal, was a major cornerstone of his campaign. But if his pledge to upgrade the country’s infrastructure is to bear fruit, it will have to include some degree of renewables, since the increasing efficiency and affordability of clean energy is making it more economically attractive. Ironically, 2017 may see tremendous private and public investment in alternative forms of energy, especially if Trump’s promise to wean the country off its OPEC dependency (holding one's breath is not advised) is to have any chance of success.

And then there’s the Tesla wildcard—by which we mean that Elon Musk could change the rules of the game at any moment. Last year’s introduction of the Tesla “energy ecosystem” opened up the possibility of a future in which every home becomes a power plant; and we can only expect more similar developments in 2017. The cliché "game-changer" was coined for people just like Musk; look to see him further justify that sobriquet in the coming year.

Last year was full of surprises—some anticipated, others decidedly not. 2017 promises to be no different. Market forces and accelerating research and investment means the avalanche in disruptive new energy technologies will continue in the new year; we clever little apes will persist in finding extraordinary new ways to eke out more energy to power our thirsty civilization.

So stay tuned to Futurism—we’ve got everything hungry minds need to survive 2017.

Read This Next
Solar Slay
Solar Powered Machine Turns CO2 and Waste Plastic Into Valuable Fuel
Fusion vs Fiction
Gloomy Physicists Say Nuclear Fusion Breakthrough Is Too Late to Save Us
Fusion Force
China Announces Plan for Hybrid Fission-Fusion Power Facility
Fusion Futility
Elon Musk Slams Fusion, Says Future of Energy Is Wind and Solar
Remember Donald?
Donald Trump Goes on Bizarre Rant Against Electric Cars
More on Earth & Energy
Fly Guy
Yesterday on the byte
Bird Advocates Horrified by Pigeon Dyed Pink For Gender Reveal Party
The Dos and Do-Do...
Yesterday on the byte
Startup Backed By "Jurassic World" Producer Says It Will Revive Extinct Dodo Using Complete Genome
Shark Smile
Tuesday on the byte
Influencer Fined for Eating Endangered Great White Shark
READ MORE STORIES ABOUT / Earth & Energy
Keep up.
Subscribe to our daily newsletter to keep in touch with the subjects shaping our future.
+Social+Newsletter
TopicsAbout UsContact Us
Copyright ©, Camden Media Inc All Rights Reserved. See our User Agreement, Privacy Policy and Data Use Policy. The material on this site may not be reproduced, distributed, transmitted, cached or otherwise used, except with prior written permission of Futurism. Articles may contain affiliate links which enable us to share in the revenue of any purchases made.
Fonts by Typekit and Monotype.