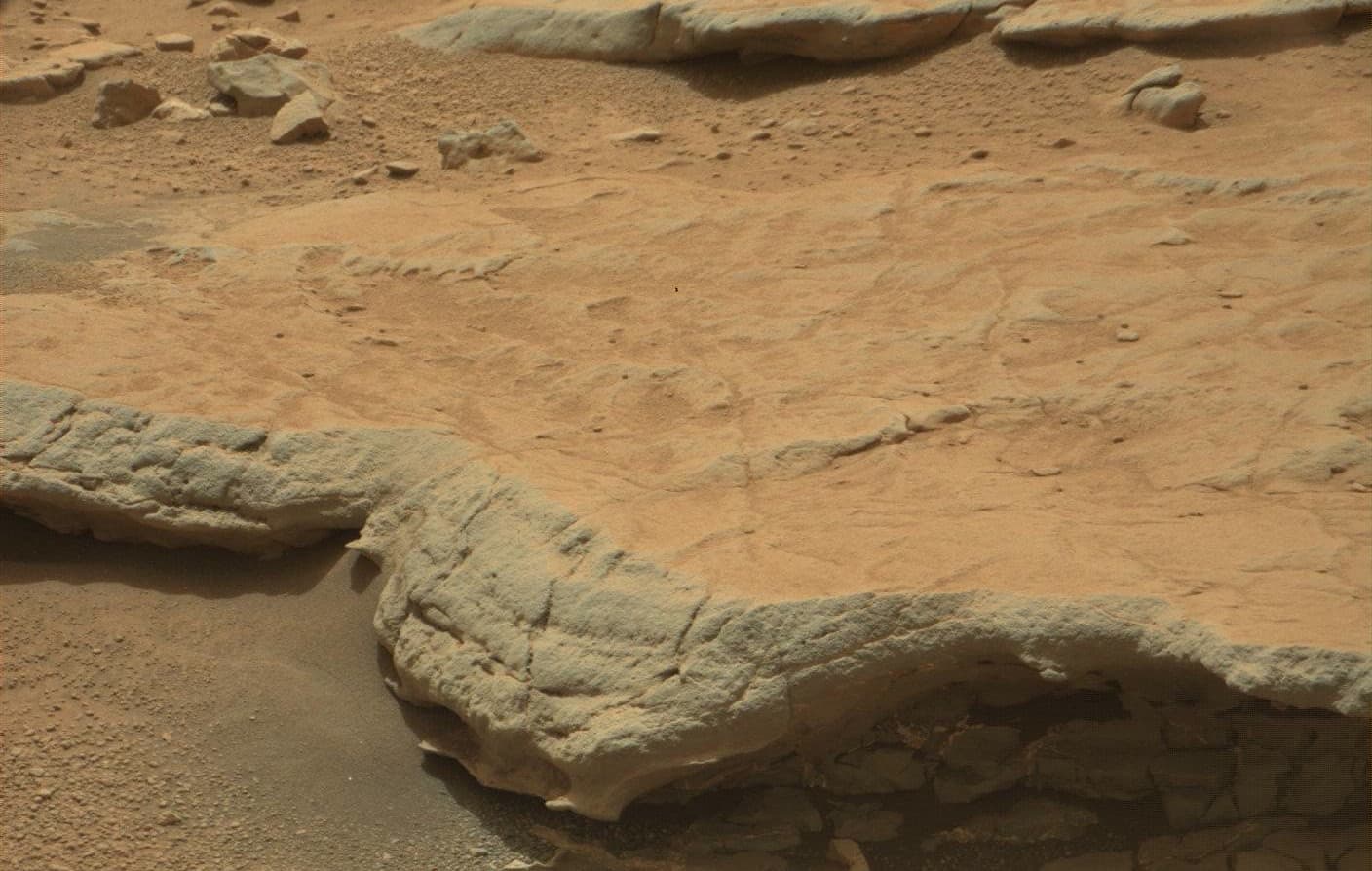 A careful study of images taken by the NASA rover Curiosity has revealed intriguing similarities between ancient sedimentary rocks on Mars and structures shaped by microbes on Earth. The findings suggest, but do not prove, that life may have existed earlier on the Red Planet.

The photos were taken as Curiosity drove through the Gillespie Lake outcrop in Yellowknife Bay, a dry lakebed that underwent seasonal flooding billions of years ago. Mars and Earth shared a similar early history. The Red Planet was a much warmer and wetter world back then.

On Earth, carpet-like colonies of microbes trap and rearrange sediments in shallow bodies of water such as lakes and costal areas, forming distinctive features that fossilize over time. These structures, known as microbially-induced sedimentary structures (or MISS), are found in shallow water settings all over the world and in ancient rocks spanning Earth's history.

Nora Noffke, a geobiologist at Old Dominion University in Virginia, has spent the past 20 years studying these microbial structures. Last year, she reported the discovery of MISS that are 3.48 billion years old in the Western Australia's Dresser Formation, making them potentially the oldest signs of life on Earth.

In a paper published online last month in the journal Astrobiology (the print version comes out this week), Noffke details the striking morphological similarities between Martian sedimentary structures in the Gillespie Lake outcrop (which is at most 3.7 billion years old) and microbial structures on Earth.

The distinctive shapes include erosional remnants, pockets, domes, roll-ups, pits, chips and cracks, which on Earth can extend from a few centimeters to many kilometers.

Although Noffke makes a tantalizing case for possible signs of ancient life on Mars, her report is not a definitive proof that these structures were shaped by biology. Getting such confirmation would involve returning rock samples to Earth and conducting additional microscopic analyses, a mission that isn't scheduled anytime in the near future.

"All I can say is, here's my hypothesis and here's all the evidence that I have," Noffke says, "although I do think that this evidence is a lot."

"The fact that she pointed out these structures is a great contribution to the field," says Penelope Boston, a geomicrobiologist at the New Mexico Institute of Mining and Technology. "Along with the recent reports of methane and organics on Mars, her findings add an intriguing piece to the puzzle of a possible history for life on our neighboring planet."

McKay adds: "That's an easy argument to make, and it's typically not very convincing. However, Noffke's paper is the most carefully done analysis of the sort that I've seen, which is why it's the first of its kind published in Astrobiology."

The images on which Noffke drew are publicly available on the Mars Science Laboratory page on NASA's website.

"In one image, I saw something that looked very familiar," Noffke recalls. "So I took a closer look, meaning I spent several weeks investigating certain images centimeter by centimeter, drawing sketches, and comparing them to data from terrestrial structures. And I've worked on these for 20 years, so I knew what to look for."

Noffke compared the rover pictures to images taken at several sites on Earth, including modern sediment surfaces in Mellum Island, Germany; Portsmouth Island, USA; and Carbla Point, Western Australia; as well as older fossils of microbial mats in Bahar Alouane, Tunisia; the Pongola Supergroup in Africa; and the Dresser Formation in Western Australia.

The photos showed striking morphological similarities between the terrestrial and Martian sedimentary structures.

The patterns found in the Gillespie Lake outcrop are consistent with the microbial structures found in similar environments on Earth.

What's more, the terrestrial structures change in a specific way over time. As the microbial mats form, grow, dry up, crack and re-grow, specific structures become associated with them. Here again, Noffke found that the distribution pattern in Martian rocks correspond with microbial structures on Earth that have changed over time. Taken together, these clues strengthen her argument beyond simply pointing out the similarities in shape.

In her paper, she also describes alternative processes through which these could have formed. For instance, the chips, pits and cracks could be the product of erosion by salt, water, or wind.

"But if the Martian structures aren't of biological origin," Noffke says, "then the similarities in morphology, but also in distribution patterns with regards to MISS on Earth would be an extraordinary coincidence."

"At this point, all I'd like to do is point out these similarities," she adds. "Further evidence must be provided to verify this hypothesis."

At the end of her report, Noffke outlines a detailed strategy for confirming the potential biological nature of the Martian structures. Unfortunately, one important step—returning samples to Earth for further analyses—is just not feasible yet.

Noffke also lists a series of measurements Curiosity could potentially do to strengthen the case if it came across such structures again, including looking for organic or chemical signatures using its Sample Analysis at Mars (SAM) instrument.

But McKay says this likely would not work. "In principle, that instrument could tell us something about the nature of these materials biologically, if there were still large amounts of biological organics in the samples," he explains. "But these are just ancient sedimentary structures, and biology has long since left."

"What's more, in practice this instrument is restricted," he adds. "There was a contamination spill in the instrument presumably during landing. So it has a very high background contamination level."

On Earth, scientists typically confirm the biological nature of microbial sediment structures by searching for specific microscopic textures, which involves cutting rocks into thin slices and studying them under a microscope.

On Mars, this would be very difficult do from an engineering perspective, although McKay doesn't rule out the possibility for future missions. "I don't know if it can be done, but engineers are pretty smart," he says. "If you give them a challenge, they usually find a solution."

He adds: "A sample return mission would be the gold standard. But that's just unlikely to happen anytime soon."