Would it be Possible to Extend the Sun's Life Somehow? 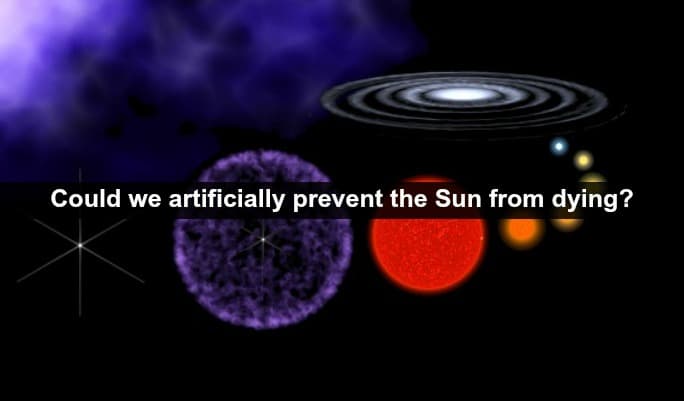 The universe itself is a proficient recycler. Stars are born, they die and the materials that remain help pave the way for the next generation of stars. Our Sun is no exception to this rule. Given the fact that the Sun is around 4 billion years old, it has already reached middle age status. Within another 4 billion years or so, the Sun will start to unravel piece-by-peice. First, the Sun's will start fusing more and more of its hydrogen content, resulting in its luminosity steadily increasing over the course of millions of years. Eventually, most of that will be gone, which will see the Sun start to fuse helium in place of hydrogen. This, in turn, will lead to the destabilization of the Sun's core, the point at which it collapses in on itself, with its gaseous envelope expanding exponentially in size.

When the Sun reaches the red giant phase of stellar evolution, it — along with any innermost planets still circling it  — will truly be doomed. Even if our planet isn't consumed during the transition, the solar winds that are ripping the Sun's envelope apart will also strip Earth of its protective atmosphere, extinguishing any life that managed to cling on after everything else died off (however, it's hypothesized that Earth will be uninhabitable long before the Sun starts to die).

Needless to say, the Sun dying is a very bad thing, which poses a question: could we artificially prolong the Sun's life-span? Furthermore, Could we keep it alive indefinitely?

Neil deGrasse Tyson discusses the possibility and how we might achieve it:

Watch: How to Stop the Sun from Burning Out