Population Growth As Seen From Space 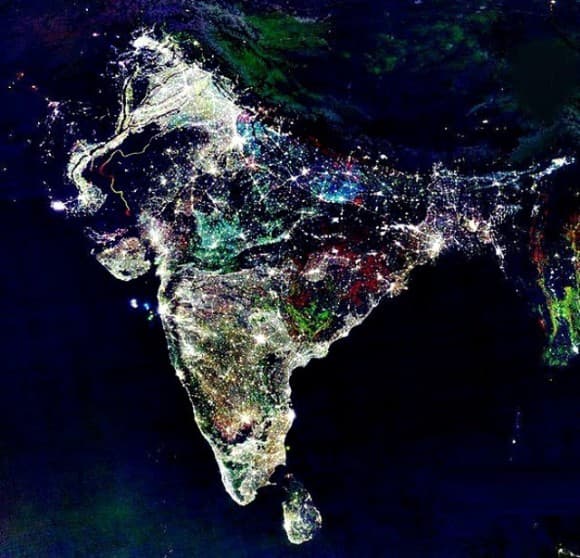 Diwali, the Indian festival of lights, falls on Thursday, Oct. 23 this year and with it come celebrations, gift-giving, and brilliant lighting and firework displays all across the subcontinent of India… but this isn’t a picture of that. What is it exactly?

Over the past several years this image has repeatedly resurfaced online, especially around the time of Diwali. And understandably so: it’s a beautiful view of India seemingly decorated for the festival… one can easily imagine the entire country awash in colorful lights from shore to shore.

But it’s not a photo at all, or even a singular image. Rather it’s a composite of many images acquired from a USAF Defense Meteorological Satellite Program (DMSP) satellite over the course of several years, and assembled by NOAA scientist Chris Elvidge to show the country’s growing population and urban areas.

In a 2012 article by Robert Johnson on Business Insider a NASA spokesperson described the colors in the image: “The white lights were the only illumination visible before 1992. The blue lights appeared in 1992. The green lights in 1998. And the red lights appeared in 2003.”

So what does India look like at night during the five-day-long Diwali festival? Click here and see.

While city lighting in India is definitely visible from space, it’s not the rainbow explosion of neon colors that Internet hoaxers and uninformed online enthusiasts would eagerly have you believe. According to Adam Voiland on the NASA Earth Observatory site, “in reality, any extra light produced during Diwali is so subtle that it is likely imperceptible when observed from space.”

So this year, don’t fall for any false descriptions of this picture… and, Happy Diwali!

The article was written by Jason Major at Universe Today. Reposted with permission.