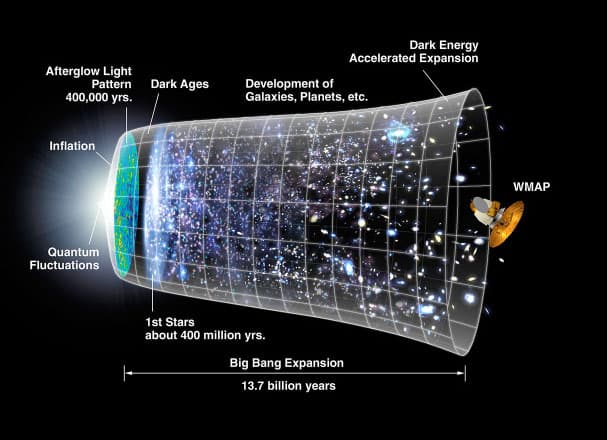 Did the big bang really happen? Yes, despite recent claims to the contrary.  A new paper in Physical Letters B has the popular press wondering if there was no big bang, but the actual paper claims no such thing.

The big bang is often presented as some kind of explosion from an initial point, but actually the big bang model simply posits that the universe was extremely hot and dense when the universe was young. The model makes certain predictions, such as the existence of a thermal cosmic background, that the universe is expanding, the abundance of elements, etc. All of these have matched observation with great precision. The big bang is a robust scientific theory that isn’t going away, and this new paper does nothing to question its legitimacy.

That doesn’t mean there aren’t unanswered questions about the big bang. For example, simple big bang models show that if you go back in time far enough, there is time when the entire universe was an infinitely dense singularity. This singularity would mark time zero for the cosmos. As many of you know,singularities are problematic, and they tend to stir up lots of debate. That’s where this paper comes in.

The paper presents a big bang model without an initial singularity. It does this by looking at a result derived from general relativity known as the Raychaudhuri equation. Basically his equation describes how a volume of matter changes over time, so its a great way of finding where physical singularities exist in your model. But rather than using the classical Raychaudhuri equation, the authors use a variation with a few quantum tweaks. This approach is often called semi-classical, because it uses some aspects of quantum theory, but isn’t a complete quantum gravity model (which we don’t have).

What the authors show is that their modified Raychaudhuri model eliminates the initial singularity of the big bang. It also predicts a cosmological constant, which is a proposed mechanism for dark energy. Their model is really basic, but this first result shows that this type of approach could work. The catch is that by eliminating the singularity, the model predicts that the universe had no beginning. It existed forever as a kind of quantum potential before “collapsing” into the hot dense state we call the big bang. Unfortunately many articles confuse “no singularity” with “no big bang.”

While this is an interesting model, it should be noted that it’s very basic. More of a proof of concept than anything else. It should also be noted that replacing the big bang singularity with an eternal history isn’t a new idea. Many inflation models, for example, make similar predictions. But none of these ideas eliminate the big bang, which is an established scientific fact.